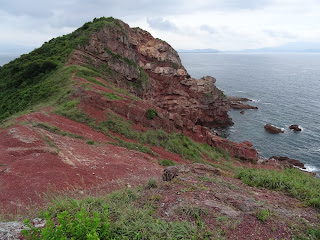 I don't know why Port Island is so called in English but
the reason for its Cantonese name of Chek Chau
(i.e., Red Island) should be clear from this photo of it! 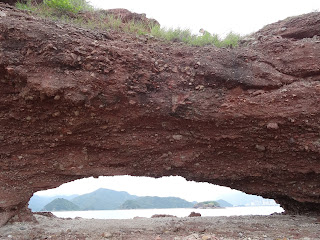 Ap Chau (Duck Island in Cantonese)'s famous sea arch is
the "eye" of the duck that the island is thought to be shaped like :) 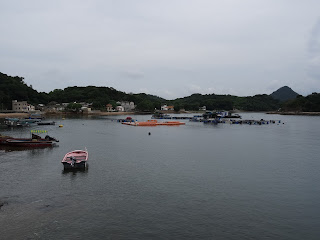 
Upon getting back into my apartment this evening, my pedometer showed that I had walked over 17,000 steps today.  But although these are the kind of the numbers I rack up on a day when I go hiking, I actually spent a good bulk of today on a boat as well as dry land!


More specifically, I went on a boat tour to some of the less accessible parts of Hong Kong, including the islands known in Cantonese as Chek Chau, Ap Chau and Kat O.  And while the term "boat tour" may have one thinking that all we did was view sights from a boat, we actually got off at the seven places that the boat we were on stopped at before returning to Wong Shek Pier to walk about, including up to a hilly ridge on Port Island, to view the Devil's Fist from up close at Wong Chuk Kok Tsui, for lunch at Sam A Tsuen, and to visit the 18th century Tin Hau Temple at Kat O.


Of the places visited today, I had only previously been to Sam A Tsuen and Lai Chi Wo -- both via long-ish treks that started off at Wu Kau Tang.  But although they're picturesque places that I was happy to make repeat visits to, today's highlights really involved finally stepping onto sections of Hong Kong that I had long liked to but hadn't seriously aspired to do so because they are islands that there are no regularly scheduled ferry or kaito services to.


Prior to today, the closest I had ever got to Chek Chau (AKA Port Island) was from nearby Tap Mun and the kaito a friend and I took from Sham Chung to Wong Shek Pier earlier this year.  With its pier having fallen into disrepair, it was quite an adventure to get on to this uninhabited island which sits at the mouth of Tolo Harbour as well as to tramp several meters uphill to get scenic views of the island and beyond (including Tung Ping Chau and the sections of Mainland China closest to Hong Kong's easternmost outlying island), with the scramble downhill scaring me into "butting it" at some points.

Several sighs of relief could be heard after our tour guide assured us that Chek Chau was the most difficult of the places we'd be visiting to get around.  And I can confirm that Ap Chau and Kat O -- both of them inhabited and boasting intact piers (and, in the case of Kat O, a surprisingly large one for an island with no longer that many residents!) -- were a good deal easier to get onto as well as move about on.

Geologically of interest for being the only two places in Hong Kong where breccia is found, Ap Chau and Kat O also are interesting culturally, including for reasons related to the main religion practiced on the two islands.  More specifically, the 0.04 square kilometer sized (i.e., pretty small!) island of Ap Chau was uninhabited until the 1950s, when a village was set up by members of the True Jesus Church, while Kat O's Tin Hau Temple is home to not just the usual one but two Tin Hau figurines -- one of which, legend has it, floated over the water from Lai Chi Wo some 4 kilometers away!

At first glance, both Ap Chau and Kat O look to have significant populations.  But I'd believe what I've since read -- that Ap Chau only has fewer than 10 residents these days -- since I saw a total of 5 inhabitants in the around half an hour that we were on the island.  And while Kat O was by far the most built-up of the places we visited today, the fact that there's no longer a school on the island says volumes about the age and diminished size of its population.

The sense I have, particularly with Kat O and Lai Chi Wo of the places we visited today, is that if they were more accessible (e.g., had regular ferry or kaito services to them), they'd be able to attract more visitors and interest, and maybe also more people willing to live there.  Looking at the broader picture: it can seem rather strange how it is that so many people in Hong Kong have problems finding affordable accomodation on the one hand and how there also really are whole, large swathes of the Big Lychee that are not occupied by humans and/or cannot attract people to stay there.
Posted by YTSL at 11:53 PM

Your photos and text narrate a day that looks quite memorable. The second photo of Ap Chau's "sea arch" is one that I will remember.

I think there are more impressive sea arches in Hong Kong than those at Ap Chau and hope to visit them some day. But agree that it looks good in photos! :)