After a friend I had gone on my first hike with a couple of Sundays earlier expressed some disappointment at our Nei Lak Shan Country Trail hike being too easy, I decided to take him on an afternoon out that would include a hike up The Twins that'd involve ascending more than 1,000 steps before being rewarded with breath-taking views of Stanley and points further south of it; this even though we would be hiking on what for sure was going to be a hot summer day.

In retrospect, I'm glad that we got to Tsin Shui Wan Au, from where we'd begin our Twins ascent, from Wong Nai Chung Gap via the Tsz Lo Lan Shan Path rather than a trail that'd involve our also going up (and down) Violet Hill -- because my friend started feeling the heat midway during the ascent and had to pause for breath a few times!  But since he's been okay with going on further hikes with me since then, I guess I didn't scare him off.  Oh, and I do hope that he did manage to appreciate the scenic views to be had along the hike -- though it's quite possible I shocked him with my glee at catching -- and managing to photograph -- not just one but two different species of animals going at it that afternoon! ;b 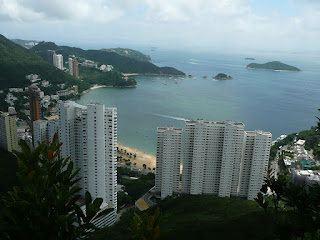 From the Tsz Lo Lan Shan Path, one can get
splendid views of Repulse Bay 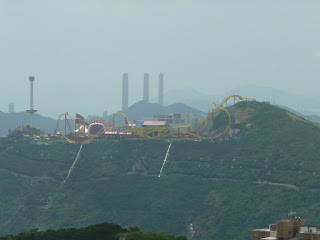 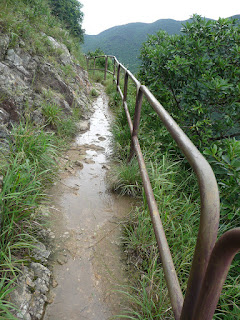 Considering the state of the path though (and how close
to the edge it often is), it's good to look down when
walking at least some of the time! ;S 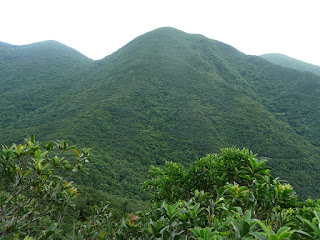 Still, there's little question that the trail up the northern Twin
will catch the eye, and often get many hikers gulping! ;b 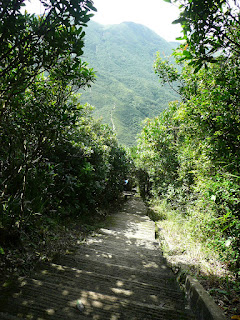 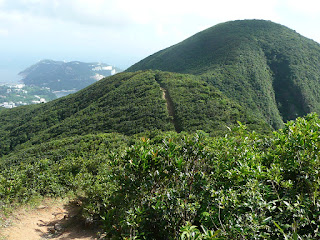 After ascending over 1,000 steps, you'll get a unpaved bit that
your tired legs may find challenging to go down (more so than climb) 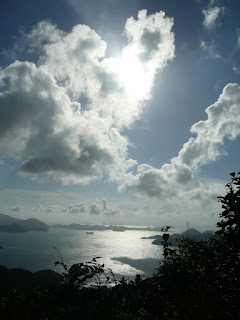 But tell yourself that gorgeous views await ahead! 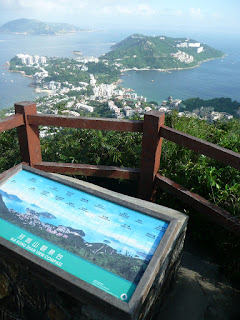 And I have to say that it's particularly satisfying when the day's
visibility levels rival those in the view compass' picture :)
Posted by YTSL at 6:13 PM

This photo-essay definitely captures a "lovely summer's day hike. I especially like the second photo from the bottom. I'm a dedicated shooter of clouds. Sometimes if you point your camera at the sun behind clouds, you get a perfect exposure. Your photo is a perfect example of this: the clouds, sunlight, and water below have a silvery ethereal look.

Thanks for appreciating this photo-essay -- and I (too) am glad at the way that the second photo from the bottom turned out. :)

Do you know what's shown in your last photo used to be a military facility? It used to be an artilary observation post. (http://gwulo.com/node/4734)

Thanks for sharing the interesting factoid! Have to say though that I can't see that artillery observation post having been of much use to the British during the second world war. Much like the guns at Singapore's Sentosa Island, it looks like it was facing the wrong direction!

The observation post wasn't for much use as it was facing the wrong direction.

I've been told Stanley was the last fort to surrender and at the last days and hours, they have been firing their 9-inch guns towards Wong Nei Chung Gap/Wanchai Gap. A friend over at Gwulo once tell he found an un-exploded penetration high explosive round up in Mount Cameron on the Aberdeen Reservoir side. EOD had to blow it up on-site. The ground shoke even when he was evaetuated to the other side of the hill on Black's Link.

There might just be some live rounds out there somewhere still, be it big or small.

I remember reading a news article a few year back about some World War II grenades having been found on The Twins near the section of the Wilson Trail that goes along it -- the very same section of trail that I have been on, and I'm sure you have too! So, yeah, I wouldn't be surprised that some live rounds remain in the vicinity.

It can be weird to realize that the green, peaceful area that's now prime hiking space was a battle zone some decades back. At the same time, it's also true enough that there are ample war relics still visible in many parts of Hong Kong frequented by hikers.

Yes, those handful of Grenades were found by another friend at Gwulo. Construction site works might still find some of these ordinance underground when they dig deep. Remember the big bomb near the Sikh Temple at Queen's Road East last year or a bit more than a year ago? The News said if that thing goes off it might flatten the whole block. (http://www.scmp.com/news/hong-kong/article/1422151/hundreds-evacuated-suspected-wartime-bomb-unearthed-happy-valley)

I was up at Blue Pools road that day while two EOD vehicles racing past me siren wailing. I know it would be something big but did not expect something that big. For this case they evacuated over two thousand people (including all the hotel guests) and block off sections of Stubbs Road/Queen's Road East/Wong Nei Chung Road in order to defuse/dismantle it.

Pretty scary for this one.

Yep, I remember the big bomb found near the Sikh Temple. Did you see Pang Ho Cheung's "Aberdeen"? There's a subplot in there which involves people getting evacuated from their homes in the Wan Chai area because of a World War II-era bomb being found in the vicinity. I wonder whether people viewing the film outside of Hong Kong realize that such incidents are actually not improbable!

Oh no. I have not watched 'Aberdeen'. I have basically quit watching local TV and Movies for at least two decades (for TV). The last local movie that I enjoyed was Ann Hui's Summer Snow. Just didn't have the urge for local TV and movies anymore.

Wow, "Summer Snow" -- that movie came out in 1995! I'd agree with you that Hong Kong cinema's glory days are past. However, I think there have been some really good films released in the past two decades. Among them are what actually are my two favorite Ann Hui films: "The Way We Are" (2008) and "A Simple Life" (2011). Do give them a chance some time.

I did buy the Ip Man DVD (Wong Kar Wai's version) last year when it was out. I bought it simply want to see how he and the actors interpret all those different form of Wushu, but I was not impressed.

I was not impressed by Wong Kar Wai's "The Grandmaster" either. Unlike Ann Hui, I think he's gone downhill in the 21st century -- with his last great film having been 2000's "In the Mood for Love". And even then, it's not my favorite of his films. That would be "Ashes of Time" (1994).