Hiking inside Kadoorie Farm and Botanic Garden, up to and down from Kwun Yam Shan 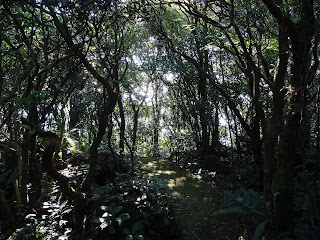 There's not much of a view at all
from the very top of Kwun Yam Shan! 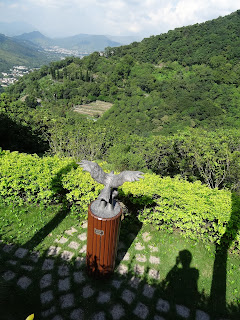 Lower down the 546-meter-high hill, however,
scenic vistas are indeed on offer :) 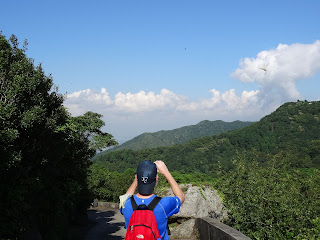 And for good measure, near the very top is an area
that could well be called dragonfly alley! ;b
On a cold winter's day with unseasonably clear skies a few years back, two friends and I hiked up 546-meter-high Kwun Yam Shan.  Although much of our ascent was on a paved road within the Kadoorie Farm and Botanic Garden rather than a genuinely wild part of Hong Kong, it still felt like quite the accomplishment upon our getting up to the top of the hill on account of that road leading up it being one of the steepest I've ever been on.
So I'm not quite sure what possessed me to suggest to a different hiking buddy that we hike up Kwun Yam Shan this afternoon, on a day for which the Hong Kong Observatory had issued a very hot weather warning!  And you know what?  We did manage to do just that, albeit only after shedding buckets load of sweat as well as huffing and puffing quite a bit along the way!
Unlike the previous time I visited this conservation and education center that was set up in 1956 on a site near Lam Tsuen, I didn't spend much time checking out the attractions in the lower reaches of Kadoorie Farm and Botanic Garden.  Instead, my friend and I focused on getting up the hill named after the Goddess of Mercy using, for the most part, a different route from the one I had previously gone up on.
On the map I had of the place, the Pillars Path looked to take a pretty direct path up from the lower part of Kadoorie Farm and Botanic Garden to a corner of the facility which now is home to four granite pillars which used to be a part of the old General Post Office building in Central that visually was far more impressive than that which replaced it in 1976.  So we decided to go up it, particularly as it also was a nature trail that we figured would be visually interesting.
Almost unbelievably, it actually was harder to go up than the steep road that snakes its way up the hill -- not least because some sections of it were ultra slippery due to their being covered by lichen.  So I actually was happy that a good bulk of our hike was, in fact, on a road; though we did also go along the easier Enkianthus Walk for a bit and, on the way down, onto the Butterfly Path which actually didn't yield that many butterfly spottings and encounters!
To give an idea of how much easier it was to go down then up the hill: I'd estimate that we took about 70 minutes to get up but less than 30 minutes to get down!  And while I had initially thought we could stop at the T.S. Woo Memorial Pavilion on the way from Kwun Yam Shan, the truth of the matter is that we were far too exhausted to entertain thoughts of checking out more sights, especially when they required our detouring more than a few meters from our charted path to the bus stop closest to the Kadoorie Farm and Botanic Garden's exit, from where we'd be making our way home! :)
Posted by YTSL at 10:07 PM