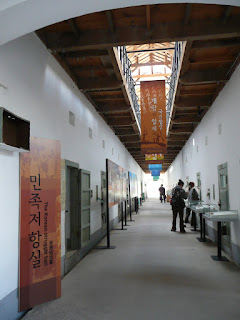 
Among the films currently showing in Hong Kong cinemas are Taiwanese auteur Hou Hsiao Hsien's Cannes award-winning The Assassin and Japanese action-comedy Assassination Classroom, a live-action adaptation of a popular manga series.  Then there's South Korean filmmaker Choi Dong Hoon's much hyped Assassination, the first domestic effort this year to surpass the 10 million ticket sales at the South Korean box office (and only the 12th South Korean film to do so ever).


The period espionage action-thriller begins with a young Korean patriot named Yeom Seok Jin (Lee Jung Jae) attempting to assassinate a colonial Japanese official Mamoru Kawaguchi (Shim Cheol Jong), only to see a fellow Korean, quisling businessman Kang In Gook (Lee Kyoung Young), save his target.  Worse, after Kang discovers that that his wife -- and mother to his twin baby daughters -- was helping out Yeom, he has few qualms about ordering her murder as well as Yeom's capture.


Years later, after finding his way out of prison, Yeom is tasked by the Korean government in exile (in Shanghai) with planning a second assassination attempt on Kawaguchi -- and now also Kang, who had enriched himself over the years while very openly collaborating with the Japanese military.  To carry out the operations this time around, he recruits Ahn Ok Yun (Gianna Jun Ji Hyun), a steely-eyed sharpshooter who had witnessed atrocities committed by Kawaguchi's men as a child, explosives expert Hwang Deok Sam (Choi Duk Moon) and weapons specialist "Big Gun" Soksapo (Cho Jin Woong).

Although Assassination intially focused its attention on Yeom and also includes colorfully monikered mercenery Hawaii Pistol (Ha Jung Woo) and his eye-catchingly mustachioed sidekick Younggam (Oh Dal Su) in its considerable cast of characters, there's little doubt that the star of the show is Gianna Jun Ji Hyun.  Best known among K-drama fans for starring in My Love From the Stars (2013-2014) and long time Korean cinemaphiles for her memorable turn in popular romantic-comedy My Sassy Girl (2001), the charismatic actress powers the movie at times in ways that only a true screen luminary can -- but her presence unfortunately also undermines the film in some ways due to there apparently being a compulsion to make her character larger than life and more photogenic than she should have been.


Don't get me wrong: for much of its 140 minute running time, I was thoroughly entertained by -- and felt emotionally invested in -- what was going on in this film whose story contains a number of intriguing twists and turns, at least one of which got me gasping at its audacity and a couple of others got me giggling with glee.  This female (re)viewer also enjoyed seeing a female character being accorded an active action role -- and, in fact, the major one -- in the movie; and one that got me positively recalling the likes of the general's daughter in Peking Opera Blues as well as My Way's female sniper, to boot.


All told, Assassination actually has a lot going for it.  Ultimately though director (and co-scriptwriter and -producer) Choi, who's known for films featuring tricksters like 2012's The Thieves (in which Gianna Jun also appeared) just went too far -- and made things too implausible -- by doing such as demanding that the movie's ace sniper also be an utterly convincing actress, able to pretend -- with next to zero preparation time -- to be a person who had grown up in a social milieu literally thousands of miles apart from hers.  In doing so, he turned what otherwise would have been a great work into one that's merely pretty good.

I have to admit I don't fancy K-movies. Don't have the urge despite there are usually beautiful female leads.

So far for recent movies, the only convincing female sniper (or a female with a big gun) was one comic character called Victoria Winslow, played by Helen Merrim. Those two movies had been quite entertaining despite the stories were basically comic nonsense.

I faintly recall Sofie Marceau seem to have have played an agent behind enemy lines with sniper skills in an WWII movie some time ago but I have forgotten the movie title. The story of this one is much better than the comics though.

I don't care for all Korean movies but I do like a number of their historical dramas/actioners. And while I'd normally identify myself as more of a Hong Kong film fan, I have to say I prefer the two Korean films I've viewed in the past two weeks than the one Hong Kong-mainland co-production I checked out in the same period... :S

And yes, Helen Mirren's fun to watch in "Red" and "Red 2" -- and must say I enjoyed watching her and Korean movie star Lee Byung Hun on screen together in the latter. :)

hello i hold a philippine passport but i'm a resident here. can i apply for korean visa in hongkong? thank u��

Thanks for visiting my blog but a read of it will let you know that I'm no expert with regards to visa applications for Philippine passport holders. I suggest you contact the Korean (North? South?) consulate in Hong Kong -- or check out their website -- for the information you seek.