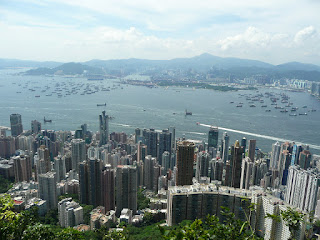 Hong Kong, the port-city that the protagonists in
Mabel Cheung's A Tale of Three Cities looked upon as a safe haven

"It was the best of times, it was the worst of times" -- thus goes the famous quote from Charles Dickens' A Tale of Two Cities.  The title of Mabel Cheung's first directorial effort since 2003 clearly references the classic English novel.  But what's less certain is which are the three cities referred to in her movie's title since the only cities I saw featured in the film were Shanghai and Hong Kong, with the other locale (in Anhui province) being more village than urban metropolis.

If only that were my only problem with this ambitious feature film which was inspired by the true story of Jackie Chan's parents (that also was the subject of Traces of a Dragon: Jackie Chan & His Lost Family, the documentary Cheung helmed in 2003).  Because as much as I wanted to like a cinematic offering by the same filmmaker who helmed such as the touching Eight Taels of Gold (1989) and intriguing The Soong Sisters (1997), the truth of the matter is that I found myself shifting uncomfortably in my seat for a good part of the screening of A Tale of Three Cities this afternoon, and opting out of attending the post-screening Q&A with this disappointing film's director (rather than ply her with queries that she might look upon as on the hostile side).


One major problem as far as I was concerned stemmed from this historical drama's story not unfolding unchronologically but, rather, beginning in 1951 in Hong Kong, with Fang Daolong (Lau Ching Wan, billed as Sean Lau in the film's English language credits) working as a cook up on The Peak and trying hard to persuade his beloved, Chen Yuerong (Tang Wei), to make the danger-filled journey across the border from mainland China.  In one fell swoop, then, a lot of tension in many of the scenes that were set in earlier times dissipated since however life-threatening were many of the situations that Daolong and Yuerong were depicted in pre-1951, the viewer already knew that they managed to survive them!


While one could argue that people already knew that Daolong and Yuerong survived into the 21st century on account of their still having been alive when Mabel Cheung made her 2003 documentary, A Tale of Three Cities was/is supposed to be only inspired by, rather than closely based on, the lives of Jackie Chan's parents.  On a related note: a second accusation leveled at this wanna-be historical epic is that it actually underplays the extraordinary lives of those two real-life individuals, one of whom had actually been a major underworld figure (something his filmic alter-ego was not depicted as being), with the other's idea of fun at one stage involving her striding into a casino with a horse-whip in her hand (something else not shown happening in this film!)!


Instead, the two protagonists in this sadly underwhelming film come across as an illiterate but good-hearted widower with two sons and the impoverished widow with two daughters and a mother with bound feet that he -- over the course of his carrying his duties as a police officer -- discovers resorting to trafficking opium in a desperate attempt to provide for her loved ones; with their two best friends (played respectively by Jing Boran and Qin Hailu) having the more colorful strands of background and personality that the real life Fang Daolong and Chen Yuerong (who came by her Western name "Lily" while working for a Western family in Shanghai) possessed.

Giving this state of affairs, it stands to reason that Jing Boran and Qin Hailu's characters actually seem more interesting than those portrayed by leading actor Lau Ching Wan and leading actress Tang Wei.  Worse is there being a distinct lack of chemistry between Lau and Tang that make it hard for this (re)viewer to believe that Daolong and Yuerong were truly made or meant for each other as well as actually worthy of focus intead of the supporting characters compellingly portrayed by the promising Jing and appealing Qin.


In fairness to the film's first-billed star: Lau was not helped by his having been partially dubbed (in those scenes where his character speaks Mandarin).  On the other hand, Tang Wei really doesn't have much of an excuse of once again not convincing in a meaty role -- and I have to confess to being tired of seeing her in plum parts (including in Ann Hui's The Golden Era and Ivy Ho's Crossing Hennessy) in movies that probably would have benefited greatly from having more genuinely able actresses in them.


To be sure, I understand the commercial imperatives for the film having Tang Wei in its cast -- and do see that it's more historically accurate for the bulk of this Hong Kong-mainland Chinese co-production to be in Mandarin.  However, it's also true enough that A Tale of Three Cities left me pining for a now bygone era where Hong Kong's directors weren't tasked with making big budget cross-border commercial hits and, instead, could be left to produce smaller scale works that truly told personal stories and touched the heart.