Playing tourist while back home in Penang! 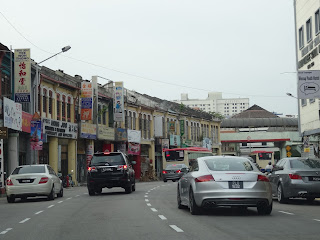 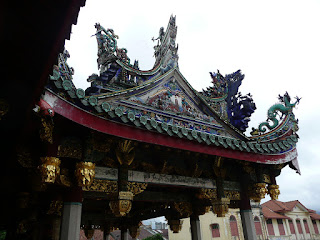 The Khoo Kongsi may look like it came out of a Chinese
fairytale but it really is located in the heart of George Town! 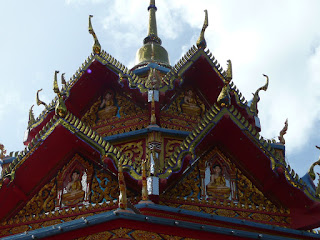 And while this structure is distinctively Thai in style,
it too is situated in Penang :)


"Take lots of pictures!", an American friend who regularly visits this blog asked me to do when I was back home in Penang.  But if truth be told, I didn't take that many on my most recent visit -- and, in fact, only one of the above photos was taken last month!


One reason why I don't take as many photos in Penang as I do in, say, Hong Kong is because I spend much more time at the family home than out and about in town and beyond.  And when I'm moving about in town, it's far more likely to be inside a car (with the air-conditioning on and the windows wound up) than on foot.  (I think Malaysians may be even more into cars than Americans; with pretty much everyone who can afford to have one owning one, or more, vehicles!)


It's also the case that often on my visits back to my home state, I tend to gravitate towards familiar haunts rather than spend that much time checking out some place new.  At the same time though, the years I've spent living outside of Penang sometimes have enabled me to see places and structures that I've been long acquainted more with the eyes of a stranger than many another Penangite.


Like my mother has remarked more than once, I sometimes behave like a tourist in the place where I was born!  To my mind, this is not necessarily a bad thing -- in that this doesn't mean that I don't know my way around these parts any more.  Rather, it's more that I sometimes now have a greater ability to appreciate things that can seem regular and ordinary, even mundane, to long term area residents.


As an example, many of the old shophouses that line sections of Penang Road can appear run-down to the locals, who remember a time -- before big shopping complexes existed in Penang -- when things were livelier there.  But even while I too remember when the area seemed more "happening" and upscale than it now is, I nonetheless do feel that they continue to possess the kind of "character" that makes one hope that they'll be around for many years to come; something which is a distinct possibility, actually, courtesy of their being situated in Penang rather than much less physical heritage-appreciative Hong Kong!


And although the Khoo Kongsi main building is absolutely amazing looking to my eyes and has existed since 1906, I actually know quite a few Penangites who have never visited it and continue to have little interest in doing so!  When asked why, one will get answers like "I'm not a Khoo!" (i.e., I'm not from the clan that this incredibly ornate clan house is officially for) and "What could be so special about it?"  To those who think the latter especially, I'd say, "Well, you'll never know until you see it!"


As for the Wat Chayamangkalaram Thai Buddhist Temple which is better known locally as the Sleeping Buddha Temple because it's home to a large reclining Buddha statue, it's principally seen by Penangites as a Thai Buddhist place of worship.  As such, those who aren't followers of Thai Buddhism don't see much reason to visit -- and I mean those who are Buddhists but follow other schools of Buddhism as well as non-Buddhists!


The irony though is that when those same people go and visit other countries, they're likely to visit places of worship (such as London's St Paul's Cathedral, Paris' Notre Dame Cathedral or Kyoto's Golden Pavilion and Kiyomizudera) to admire their beauty and such.  But somehow, it just wouldn't occur to them to do the same with regards to places of worship in their own neck of the woods.

In summary: I'd recommend that people try "playing tourist" in their home territory every once in a while.  And I'm willing to bet that when doing so, chances are high that you'll gain a greater appreciation of -- or even just plain notice -- the physical beauty and/or cultural heritage that exists around you! :)
Posted by YTSL at 11:57 PM

I concur! Working in San Francisco for the past 14 years, I've become rather immune to its charms, focusing instead on the things that annoy/depress me. But whenever I am able to look at it with fresh eyes, I do get that feeling of amazement and discovery. Speaking of which, I finally visited the Chinese Historical Society in Chinatown for the first time ever. It's quite a charming place, housed in the old YWCA building, and currently featuring exhibits on the qipao, the racist "Underground Chinatown" concession at the 1915 Panama-Pacific Exhibition, and the Chinese workers who helped build the transcontinental railroad.

It's not that we're turning a blind eyes to the problems that all cities have but it can help make one's life brighter -- and one more appreciative of places -- to try looking at them with fresh eyes at least every once in a while. On my most recent visit to San Francisco (back in the late 1990s!), I went to the 4-Star Theater in Chinatown to watch "A Hero Never Dies" on a big screen. That same visit, I also caught a screening of Hou Hsiao Hsien's "Flowers of Shanghai" at a museum. Good times, and memories! ;)

You'll be happy to hear that the 4-Star is still around and showing current HK movies -- most recently, Ringo Lam's new film Wild City.

Wah re the news, especially since "Wild City" has yet to open in cinemas in Hong Kong! :O

I love the Khoo Kongsi and reading this blog recalls memories of when I visited it years back. Some find clanhouses too ornate, but that is all part of their charm. Just walking through the interior of Khoo Kongsi, one can feel the presence of family histories...On the day I visited there, I also went to the Penang Buddhist Association on Anson Road. Created by Straits Chinese Buddhists without the influence of Taoism, it is often overlooked by tourists. With its tile floors, glass chandeliers and Italian marble Buddhist statues - it is a Penang treasure.

Not all clan houses are ornate. As an example, I wish the Teh Kongsi building was more like the Khoo Kongsi (or even Cheah Kongsi) but that's most certainly not the case!

Re the Penang Buddhist Association: I remember visiting as a small child and seeing a monk walk on swords in a ceremony which took place there! Sounds like something out of a (kungfu) movie, right? ;b