Along Memory Lane back to Balik Pulau 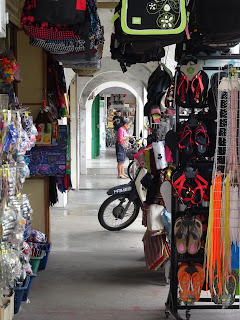 A  five foot way along the main road of Balik Pulau 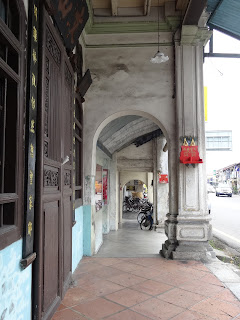 Strolling along this covered walkway can feel like
one's transported back to another, quieter as well as older age

One day when I was back in Penang last month, my mother, two old friends and I drove over to Balik Pulau, the town on the western, quieter side of Penang Island.  As one might expect of Penangites, our chief reason for going there was food-related: that is, we went there for a laksa lunch, and some food shopping at the town's municipal market!
What with it being Ramadan, my favorite Malay assam laksa stall over at Shamrock Beach wasn't open on weekends like it's usually the case.  So, I welcomed my mother's suggestion of heading over to the "back of the island" (as its name translates from Bahasa Malaysia into English) to eat at a stall there that serves up both assam laksa and the creamier Siam laksa (AKA laksa lemak).  (On the other hand, I eschewed one of our family friend's recommendation that I opt for an assam laksa and Siam laksa mix, like it apparently is her wont to do!)
Some of my earliest memories of Balik Pulau involve eating assam laksa with my parents at a stall located just meters away from where we ended up eating this time around.  I also remember spending time as a child wandering around the smelly -- but atmospheric -- old municipal market which now has been torn down and replaced by a much larger complex whose architecture I reckon resembles -- at least from the outside -- an apartment block rather than something more befitting a marketplace!
Although both the old laksa stall and municipal market are no more, much of the old section of the town looks to have been spared the wrecking ball still.  And while not entirely frozen in time (among other things, I only saw one house and shop front in the town center that has retained its old carved wooden door and window frames), there is a sense that time goes by at a slower pace in this neck of the woods still than over on the busier sides of Penang Island over to the east and north.
Now more easily accessible to the other sections of Penang Island than in my childhood (with such as the construction of a road connecting this part of the island to Air Itam -- which, of course, also is home to another locally famous laksa stall), Balik Pulau still appears to lie off the beaten track for most visitors to Penang.  Those in search of culture heritage sights as well as foodie delights who venture out to there should feel amply rewarded for their troubles though.
Foodies should note that there are many lover of the spiky "king of fruits" who believe that the best durians are grown -- and to be found -- in the Balik Pulau area.  As for those primarily attracted to Penang because of UNESCO World Heritage-listed George Town: wouldn't you like to stroll along the five foot ways pictured at the top of this blog post?  Granted that they don't possess the tiled beauty of some of those found in the state capital but I found them to have their own pleasing aesthetic qualities, not least in their continuing -- but who knows how long more this will last? -- to feel "authentic" rather than have been altered to try to suit tourist tastes.
Posted by YTSL at 10:55 PM

Hi YTSL! I'm planning a trip to Penang later this year, so I'm starting to think about where I want to visit. Will definitely add Balik Pulau to the list. Alas, I probably won't be arriving in time to sample their famous durian.

I can't remember if this would be your first visit to Penang and if not, whether you went before George Town got on the UNESCO World Heritage list or not. But do make sure to check out the heritage areas and if you ever find yourself in the E&O Hotel, do check out its social history gallery.

As for Balik Pulau itself: well, at least the laksa is available all year round -- though, be warned, the famous laksa stall I ate at does close on one week day each week!

I haven't been to Penang since the mid-90s, so I will definitely check out the heritage areas. What I remember the most from my previous two trips are a Burmese Buddhist temple, a magical Hari Wesak procession that I chanced upon, the butterfly farm, and the two-day bike ride I took around the entire island. Looking forward to reacquainting myself with your hometown!

If you went around the entire island, I'm sure you rode by Balik Pulau! Sounds like you enjoyed your two previous visits to Penang. Hope you'll enjoy your future third too! :)

I like your photos of the covered walkways which certainly do "transport" one to "another age." Straits Chinese or Peranikan culture and history is so fascinating.

I looked upon Straits Chinese/Peranakan/Nonya Baba culture as pretty normal as I was growing up as that was the culture of my grandparents, etc. As an adult, I've grown to appreciate it more -- especially the food and other material culture. ;)

As for covered walkways: they exist in Hong Kong too... albeit in different forms. May do a blog post about that some time... ;)