"Now we'll see more sun!" proclaimed Anna, the MS Richard With's lively tour manager, after the ship crossed the Arctic Circle and left the Arctic region on the southbound section of its coastal voyage.  And while we still did have rainy periods and cold temperatures made even more frigid feeling as a result of the strong winds that kept on blowing, it's true enough that we saw quite a bit more sunshine the day that we passed by the island of Vikingen and its Arctic Circle monument.

Unfortunately, the weather still didn't fully cooperate to enable us to see the tops of the famous Seven Sisters mountain range when we passed by them in the early afternoon.  More fortuitously though, we were indeed able to see the natural phenomena identified in the ship's program notes as the (visual) highlight of the day: Torghatten, the hat-shaped mountain and its hole which supposedly was the result of an arrow going through it.  So went a Norwegian legend recounted in a short video shown  shortly before we sailed around -- not just past -- the granite mountain on Torget Island! ;b 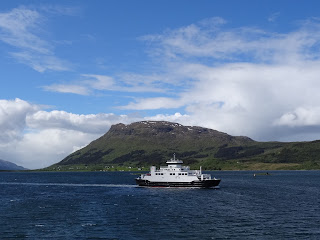 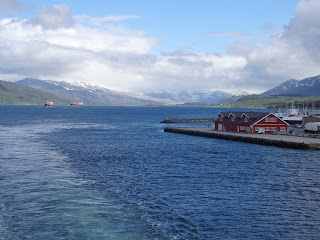 Steaming away from Nesna, an old trading post with still
just 1,000 inhabitants that the ship only briefly stopped at 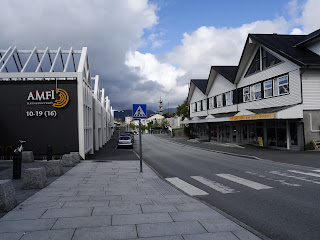 Like in gray Trondheim the previous Sunday, there weren't
many people out on the main streets of Brønnøysund
despite the weather being quite a bit nicer that day! 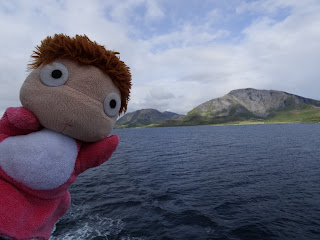 Puppet Ponyo says: "Prepare yourself to be bowled over
by nature's grandeur and beauty!" 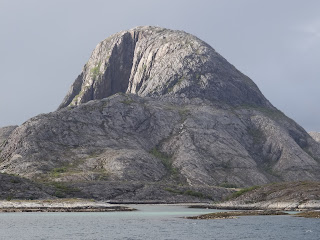 Behold the granite behemoth that is Torghatten! 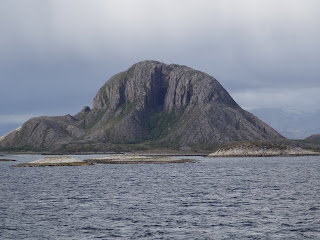 "What's the big deal about the hole?" I hear you ask 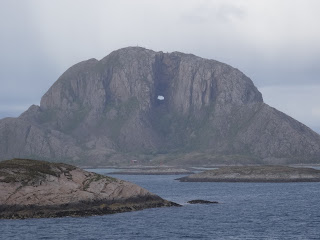 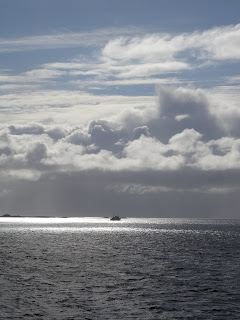 And as a bonus, it was also nice to see the sunlight
create silvery reflections on the water :)
Posted by YTSL at 11:38 PM

This entry captures what must have been a great day of cruising...The granite mass of Torghatten and its hole, continues the emanations of Norse mythology that I can feel just by looking at all the photos and text entries from this vacation...As for your global traveler-companion, Puppet Ponyo, you've captured her in her traveler's thrill ride bliss, gliding over the ocean.

There are some of might have thought, upon seeing the sunshine that day, of what could have been. But I was pretty happy with what the day itself offered.

As for Puppet Ponyo: There were times during the voyage when I worried that she'd be inclined to jump overboard into the sea... Happily (for me), she didn't! ;b