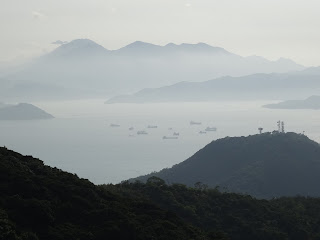 With views like this one (and these more "classic" ones) to be had
up on Victoria Peak, it's understandable that many people
don't think to look closer about them when up there 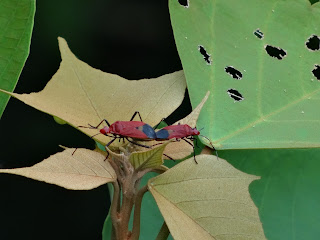 Thus they'd miss seeing interesting activities going on
in the insect kingdom like this being enacted
by a pair of amorous stink bugs! 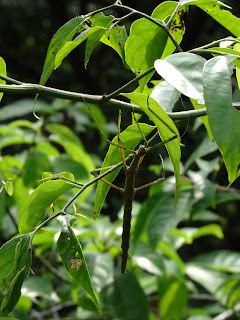 Spot the camouflaged critter (and its beady eyes)! ;b

The temperature rose to 35 degrees in some parts of Hong Kong today, a few showers were predicted and I've got a bit of a back ache that worried me enough to prompt me to go have it looked at by a doctor earlier today.  Yet I found the siren call of nature irresistible this afternoon, and thus went ahead for a stroll along leafy Lugard Road up on The Peak, then trekked on a nicely shaded path down to Pokfield Road, just above Kennedy Town.

On hot summer days in Hong Kong, it's good to bear in mind that elevated green areas like Victoria Peak, Lantau's Ngong Ping plateau and Tai Mo Shan are several degrees cooler than the concrete jungle below.  (What's more, hot summer days -- when the wind blows from the south rather than north -- often are high visibility days!)  And that was indeed the case on this Sunday which had me feeling like I was baking at sea level in the city but sweating far less upon ascending several hundred meters above it.

After leaving the more built-up sections of the Peak behind, I slowed down my pace and gave myself more time to enjoy being amidst greenery once more.  And while it was impossible to ignore the splendid views of the city below, I have to honestly say that I enjoyed far more the ample critter spottings that also were to be had on this very easy hike.

Butterflies flittered high above but also at human calf level, and ditto re a few dragonflies.  Spiders large and small busied themselves weaving webs or stayed still while awaiting their prey.  The occasional wasp made appearances, and ditto re caterpillars, hairy and less so.  And there were the birds that I was unable to see but whose songs and chirps I definitely heard!

Then there were the three creatures whose spottings I actually would go so far as to proclaim to be the highlights of my first Hong Kong hike in two months.  First up were the two stink bugs that scurried about from leaf to leaf even while (temporarily) joined by an act that other insects tend to give their full attention to -- or, at least, cause them to not move about all that much!  Then there was the green stick insect that camouflaged itself so well that I'm actually pretty surprised that I managed to spot it (and have to admit to having spent some time deciding whether I had mistook a part of the tree that I was looking at for a living thing)!! :b
Posted by YTSL at 10:10 PM

Nice to have you back in your hiking mode amongst Hong Kong's greenery and "insect kingdom." It must be therapeutic to live in a high stress city yet have this beauty so easily available...The insect photos and the view from the Peak are among your best.

I honestly don't think I'd find Hong Kong livable if it were all high-density concrete jungle. Like I told my mother after Sunday's hike, I had forgotten how happy hiking can make me feel -- and it has indeed been a wonderful de-stresser over the years. :)

Wonderful photos of what sounds like a fun hike.

Am glad you like the photos and it was indeed an enjoyable hike. :)