In the windy Norwegian town of Bodo 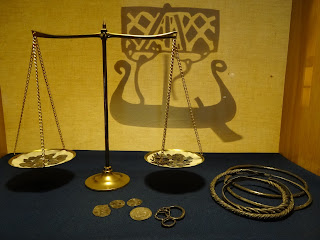 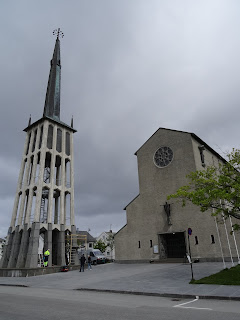 Bodo Cathedral is of a much more recent vintage 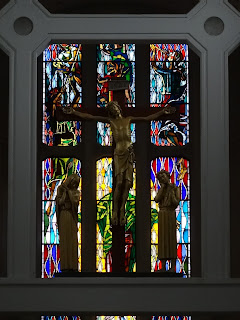 The afternoon after the northbound MS Richard With crossed the Arctic Circle, the ship made a two and a half hour stop at the northern Norwegian town of Bodo.  Maybe it's a mental thing but I felt that it was noticeably colder in the Arctic than in the area to the south of it; so much so that I made sure to have my wool cap, gloves and scarf along with several other pieces of clothing on when I went ashore.
A number of the ship's passengers had gone on an excursion to view the Saltstraumen that's reputed to be the world's strongest maelstrom and another group went to check out the Norwegian Aviation Museum located on the edge of town.  There also were those (like my mother) who decided they didn't want to leave the ship for the relatively short period of time that it docked in Bodo.

A few others, including me, decided to head to the center of town and take advantage of shops and attractions being open on a Monday afternoon (unlike the case with Trondheim on the Sunday morning before), with the 20th century Bodo Cathedral appearing to be the main draw for us despite the mixed opinions we had heard of it.  (Like a crew member confessed to me, she wasn't sure whether to think that the building is interestingly innovative or plain ugly!)
Consecrated in 1956 as the replacement for the old cathedral which had been destroyed -- along with the rest of the entire city center -- by German bombs during World War II, the "new" Bodo Cathedral is a concrete structure that also contains traditional elements such as colorful stained glass windows and an eye-catching altar piece.  Fairly unassuming looking from the outside (I found the nearby City Hall was far more physically impressive and had initially thought that that was the town's cathedral!), it's spacious and airy --and, at least on this day with the midnight sun, pleasantly bright -- inside.

With time to spare (even after having done a bit of shopping at a pharmacist's), I also got in a visit to the Nordland Museum located next door in one of the the town's oldest buildings.  A British couple told me they had found it disappointing but, considering that Bodo's population is just around 50,000, I thought this local museological institution was at least serviceable and had a video show that was informative (and helpfully subtitled in English).
Thanks to the Nordland Museum (in particular, its informative video), I learnt that Bodo was built on a windy gap -- though I never did learn why that was the case.  (And yes, I, for one, would never have done that as well as can attest to it being pretty windy indeed out there on the streets of Bodo!)!
Rather fortuitously, fishermen were able to catch lots of herring from the nearby waters -- and after a slow start, this town established in the early part of the 19th century went on to grow with leaps and bounds (and, among other things, was home to Norway's first cinema!).  And while it experienced terrible times during World War II, it's managed to grow back afterwards -- and, from what I could see in the short time I was there, is now home to a multi-ethnic populace.
Incidentally, something I got to thinking while in the museum is that Norwegians appear to like their buildings -- along with the insides of buses and cruise ships -- very warm.  Consequently, while I had to have lots of clothes on when outdoors (even though it already was June when I was there), I had to peel off a few layers of clothing in order to feel comfortable a few minutes after entering the Nordland Museum!  What's more, this layering and unlayering is something that I found myself doing a lot of in my time in Norway, and observed many other folks -- admittedly more likely to be non-Norwegian than local -- regularly as a matter of course too!  ;b
Posted by YTSL at 11:29 PM

Scandinavian country I would like to visit. Also I could adapt to there liberal goverment.
Coffee is on

I'd definitely recommend visiting Norway and there definitely are aspects to the Nordic governments that are attractive. Funnily enough, I found certain of Norway's policies (e.g., with regards to alcohol and Sundays) ultra conservative but I sure do like that they strive for social equality.