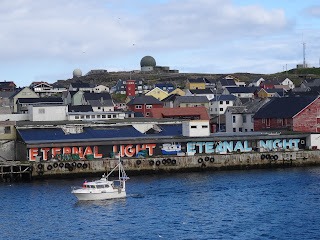 In addition to being located north of the Arctic Circle
(and therefore in the land of the Midnight Sun),
Vardo happens to be Norway's easternmost town 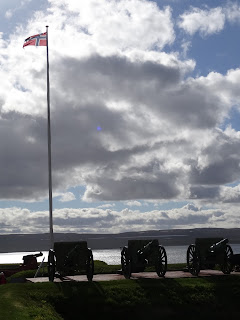 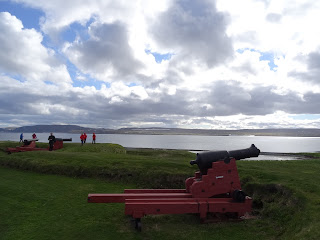 The Vardohus Fortress is the world's northernmost fortress
and also Norway's easternmost fortress
Although Kirkenes is the official turnaround point for Hurtigruten ships, it's actually not the easternmost port visited by them.  That distinction, instead, belongs to the town of Vardo, on the island of Vardoya, located to the east of the large Varanger peninsula -- and at longtitude.31°06′38″ East.
To get an idea of how far east that is, consider that Kirkenes is located at longtitude 30°02′44″ E.  Not only that but that Istanbul is located at longtitude 28°56′58″ E, Saint Petersburg is located at longtitude 30°18′50″ E and Kiev at 30°31′25″ E. Put another way: Vardo lies further east than those Turkish, Russian and Ukrainian cities!

Very early in the morning before the MS Richard With docked at Kirkenes, it had actually made a short stop at Vardo to deliver and load some goods.  Making good on its promise to re-visit the ports it had previously done on its northbound journey when heading southbound, however, the ship stopped once more in Vardo later that day -- and this time around, I took advantage of this and went ashore to visit the Vardohus Fortress whose current incarnation dates back to 1738.
Built to guard the border with Russia, this picturesque star-shaped fortress has only fired its guns in anger once in its history.  More a heritage installation and tourist attraction than serious military facility these days, it houses a museum and is pretty much only a "flag and salute fortress" whose duties primarily are to ensure that the Norwegian flag is flown over this part of the country and to fire its guns on Constitution Day, royal birthdays -- and to salute the sun's return when its entire disc can be seen for the first time each year!

This is not to say though that Vardo no longer is home to an important defence facility.  It's just that these days, its most important defence installation is the Globus II radar station whose domes -- as can be seen in the top-most photo on this blog entry -- are very visible components of the townscape.
Moved to Vardo in 1998 from California's Vandenberg Air Force Base, this radar facility's official stated use is space surveillance (as in tracking of space satellites and debris).  But for all the positive memories and continued goodwill that some people over in Kirkenes may have of the Soviet Red Army, it's strongly suspected that Globus II's primary use is to gather information about Russian military activities, including monitoring missile activity! :O
Posted by YTSL at 10:32 PM