Curse and People at Work (This week's Photo Hunt themes) 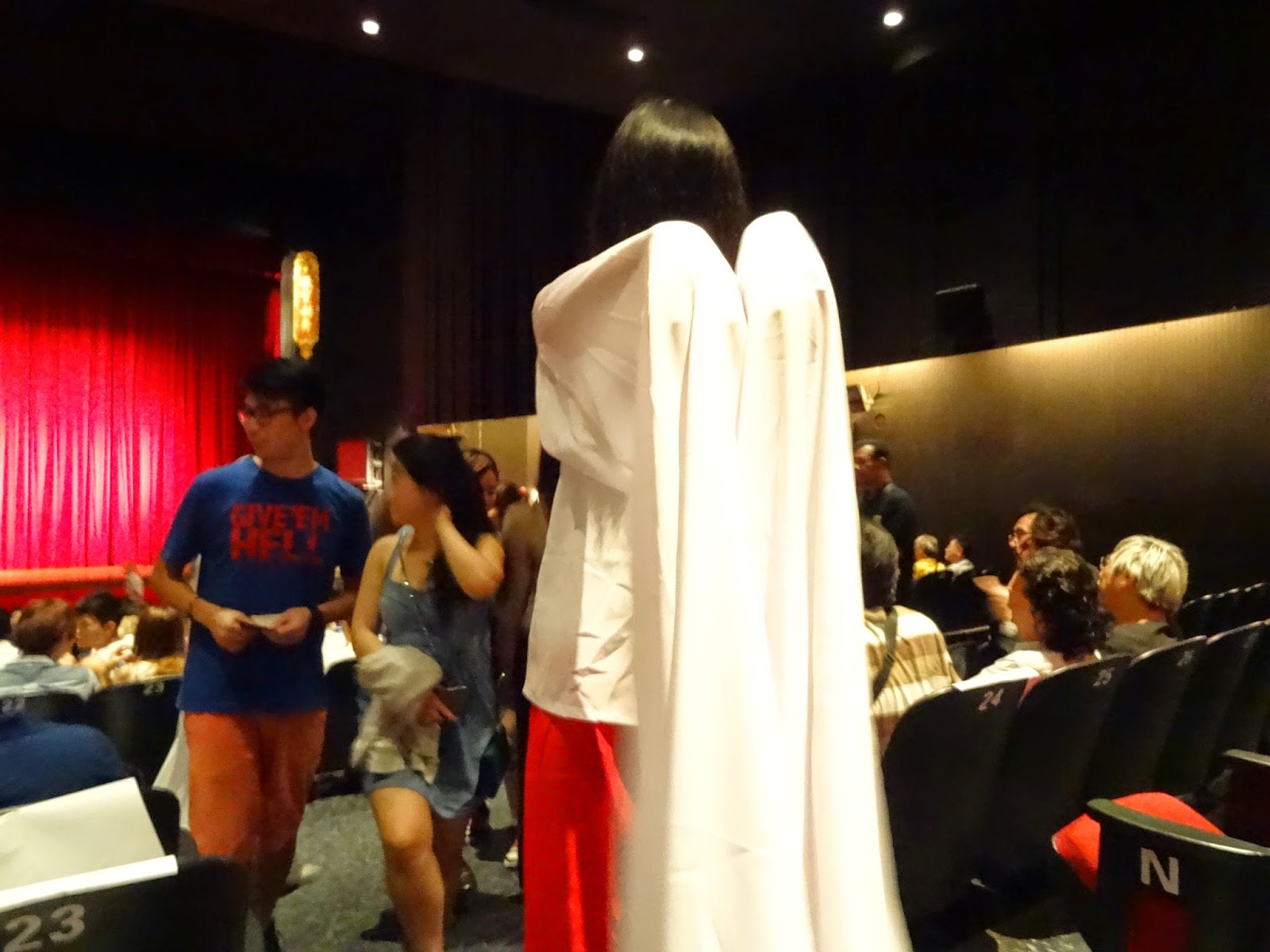 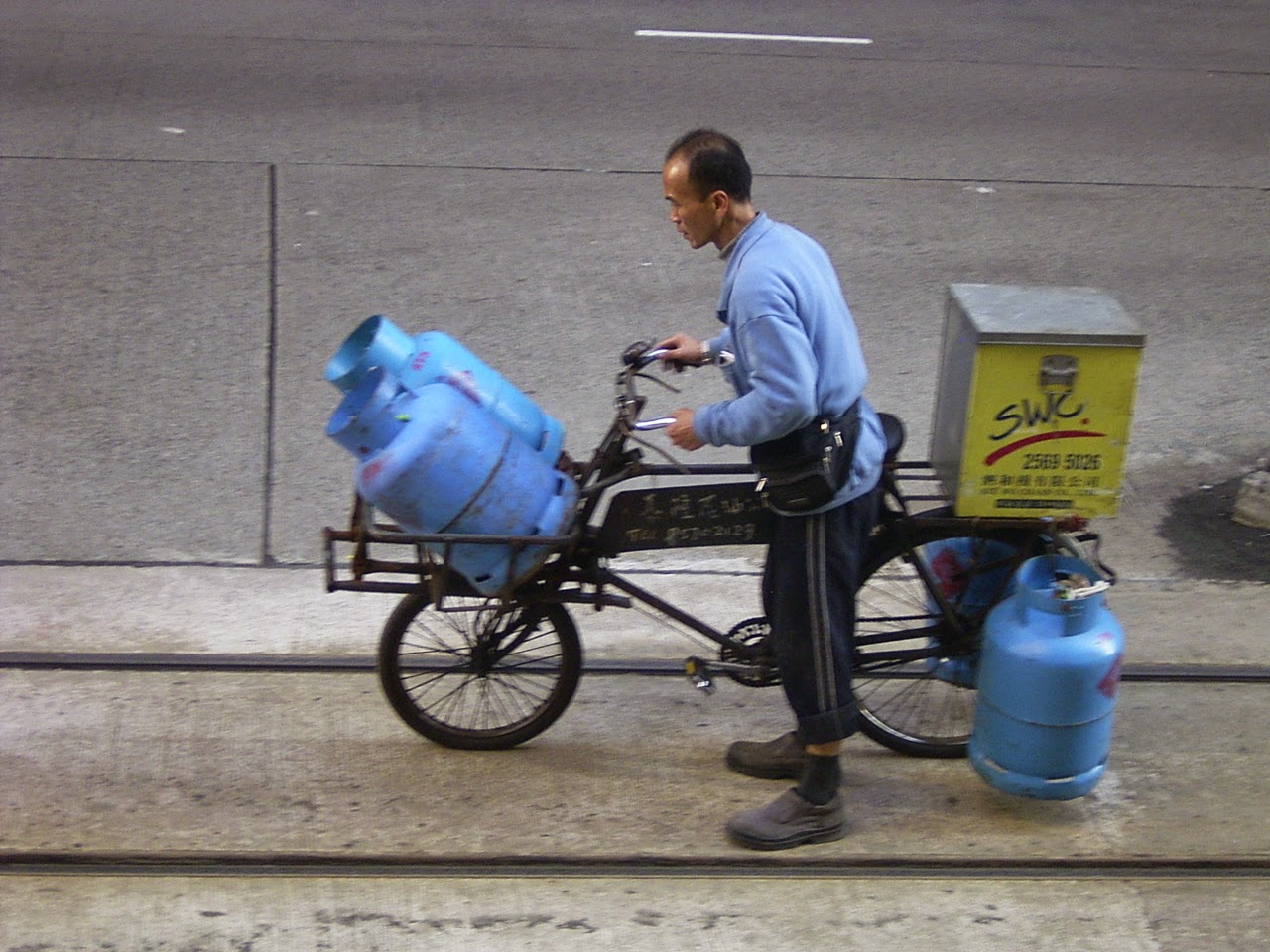 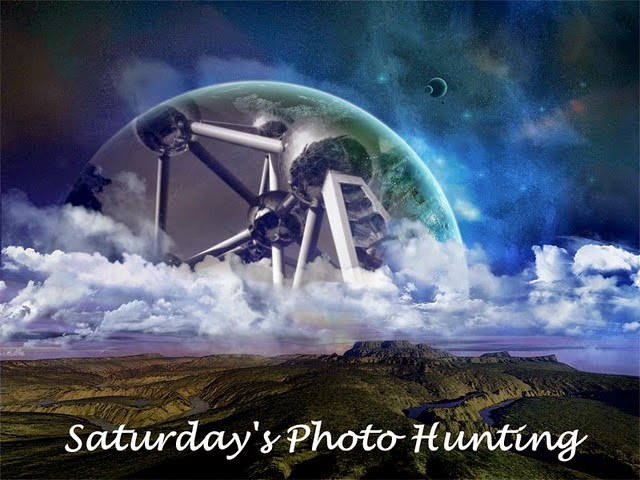 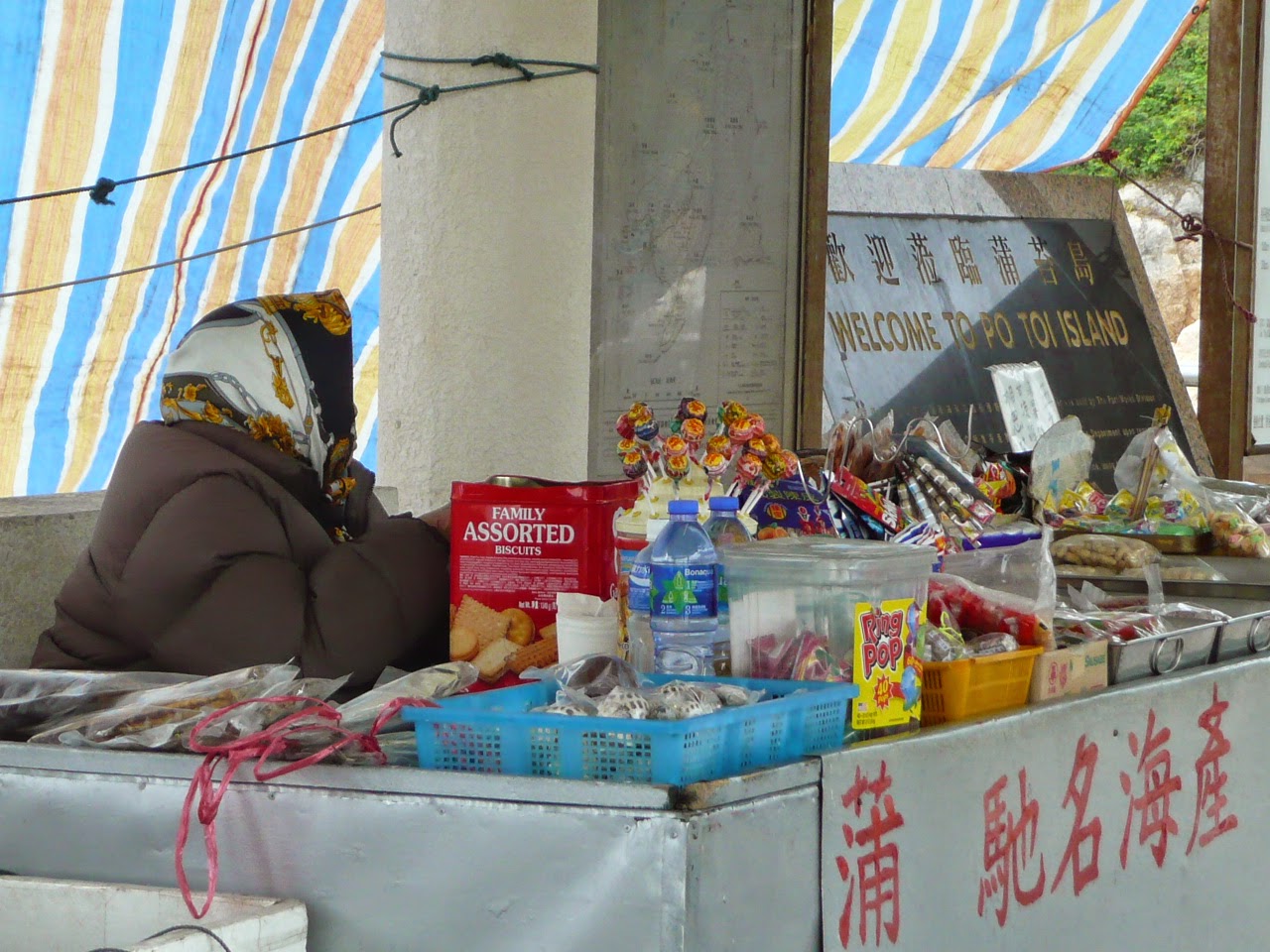 Every so often, I look at certain people at work and think "what a hell of a job they have".  That was the case the night that I went to a horror movie premiere and saw "ghosts" wandering about in the theater -- and got to wondering if those young women assigned those roles looked upon it as a curse (this particularly since I find Hong Kong to be a very superstitious society)!

More usually, however, the jobs that get me thanking the heavens that it's not been my lot in life to undertake them tend to be of a more menial nature, and often involve literally heavy burdens.  As an example: see the middle photo in this entry for Sandi's and Gattina's Photo Hunts -- of one of a number of men whose work involves transporting heavy cylinders of liqufied gas on bicycles from their stores to the many homes in Hong Kong -- some of them on upper floors of elevator-less buildings -- which use them.

Then there was the elderly woman I spotted manning her open-air stand at the pier on a windy winter's day the last time I visited Po Toi, Hong Kong's southern-most island.  She may not look like she's doing much in the photo but she definitely is one of those people whose work I would not wish to have, especially on the day that I saw her at her job.

At the same time though, I got the feeling that she actually didn't consider her lot in life as one that was the result of a curse -- since she was surprisingly cheery when I went and bought some pickled scallions to snack on while waiting for the ferry to arrive.  In addition, seeing her also got me musing that while there are some folks who are envious of those who can opt for early retirement, there also are  people who are happy to be at work -- and not just because they feel forced to either - way past what many of us consider to be retirement age!
Posted by YTSL at 11:42 AM

Hi YTSL, oh my gosh those cylinders look so heavy. I find it so fascinating to watch people at work when I travel, especially in unique type jobs. Great photos for the two themes.

They ARE heavy -- and I always feel bad when the worker carries it up to my apartment, so make sure to give him a good tip!

I am grateful to these people who are doing jobs most of us won't do.
Happy weekend!

Must be a very hard work to carry these bottles around !

I am too! I especially have a lot of respect for those who work at disposing waste. Theirs is a hard lot indeed.

I can't think as if I'd enjoy that job at all!

You mean any of the jobs, right? I think it could be fun to play a ghost but I'd definitely not want to try the other jobs!

I can truly relate to these images, especially the photo of the worker on the bicycle and the bottom photo of the elderly woman. I find both of these photos very touching, the kind I look for as a traveler.

If I had taken these photos while traveling, these anonymous "people at work", would remain in my memory as long, if not longer, than any architectural or geographic sight.

Sometimes I feel that people may think that photos like those are too "voyeuristic". For my part, I captured those images because they tell of people working hard and honestly to make a living -- people who I respect, am in awe of even.

Incidentally, the workers transporting those cylinders of liquid gas on bicycles often get me thinking of Derek Yee's "2 Young". Have you seen that film? It's one of those works that has left me with strong memories and images.

You asked me if I had seen "2 Young". I haven't, but I located some clips on YouTube. It looks to be a well acted movie, which reviews I read, confirmed...

If I may use this space for further film comments... Since it is usually a long wait for HK movies to be released in North America, I did rent two pretty recent ones from last year...Special ID with Donnie Yen. I didn't see anything original in this movie, but the fighting and car chases were good and with glowing cinematography by Peter Pau - this fanboy admits to watching this generic guilty pleasure twice!

The other film, Rigor Mortis, seemed incoherent at first, but on second viewing, I found myself liking this CGI warpage of Mr Vampire films. However, it is the performances of the older actors, especially Bau Hei-Jing as the seamstress, that impressed me. Like Gallants, it recalled an older generation of film, seen through the eyes of a younger director....

Finally, I saw an old Wilson Yip cheapie, Bio Zombie, which was funny. According to a book on HK film locations, this was filmed at the New Trend Plaza Mall, North Point.

Of the three Hong Kong films you've recently seen, I've seen "Rigor Mortis" and "Bio Zombie" but not "Special ID". My memories of "Bio Zombie" aren't all that vivid since I viewed it years ago; and have to say that I didn't care for "Rigor Mortis" as much as you, though I do think the veteran actors did do a good job.

BTW, the actress you named as Bau Hei-Jing I know better as Paw Hee Ching. A piece of trivia you may be interested in: she's the sister of... cinematographer Peter Pau! ;)