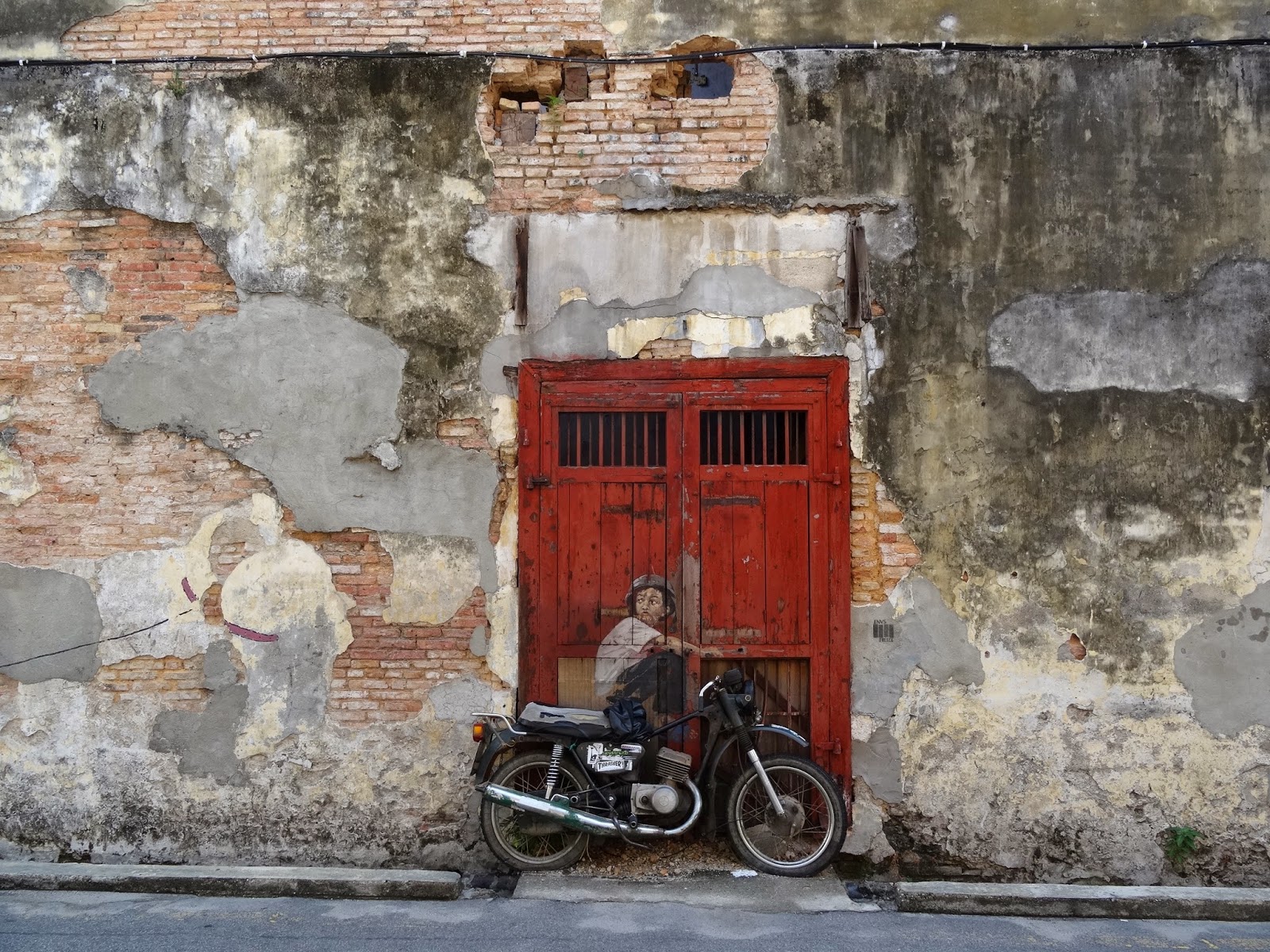 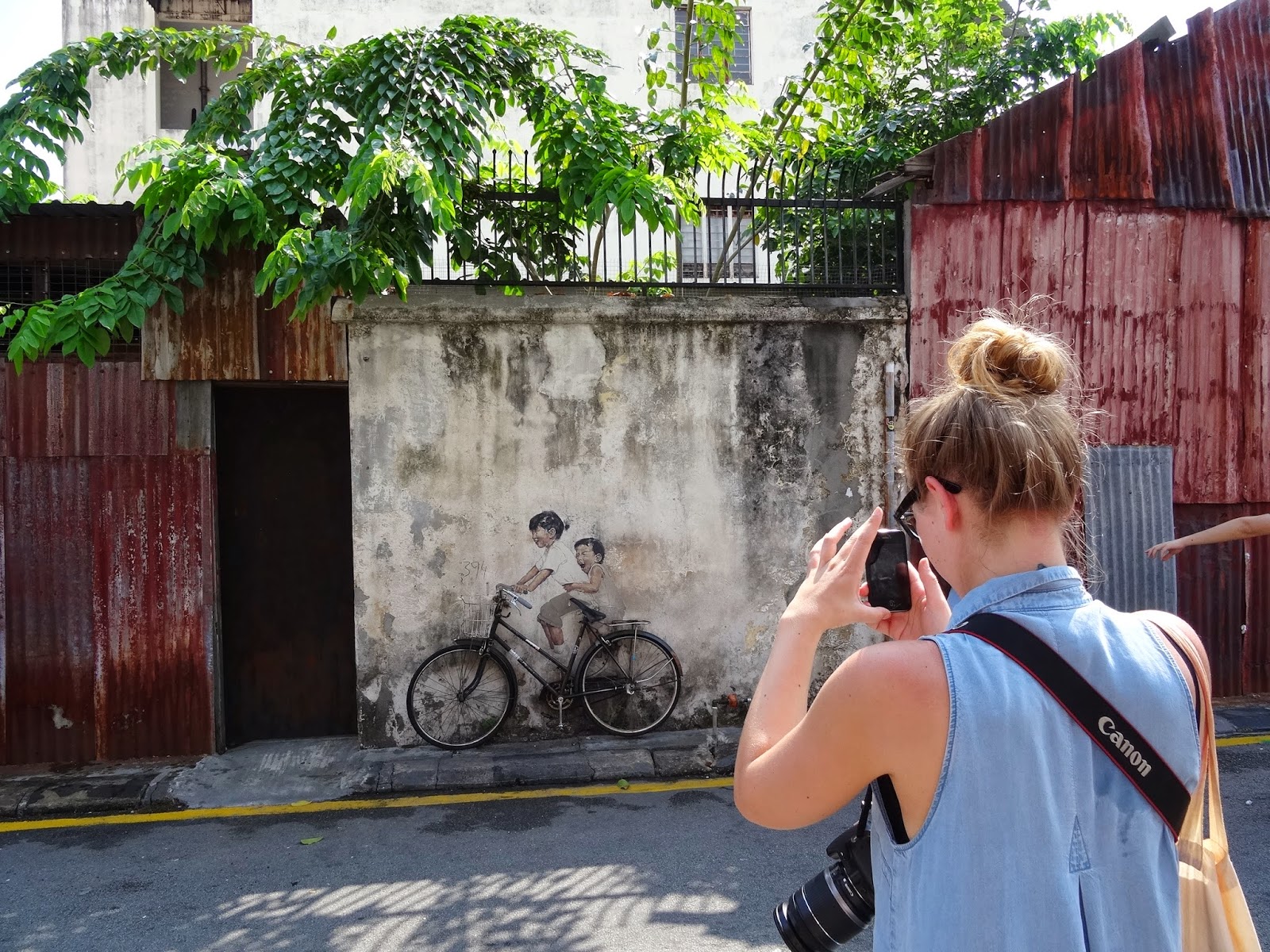 Judging by the number of people photographing it,
Little Children on a Bicycle looked to be  the most
popular of Zacharevic's George Town murals 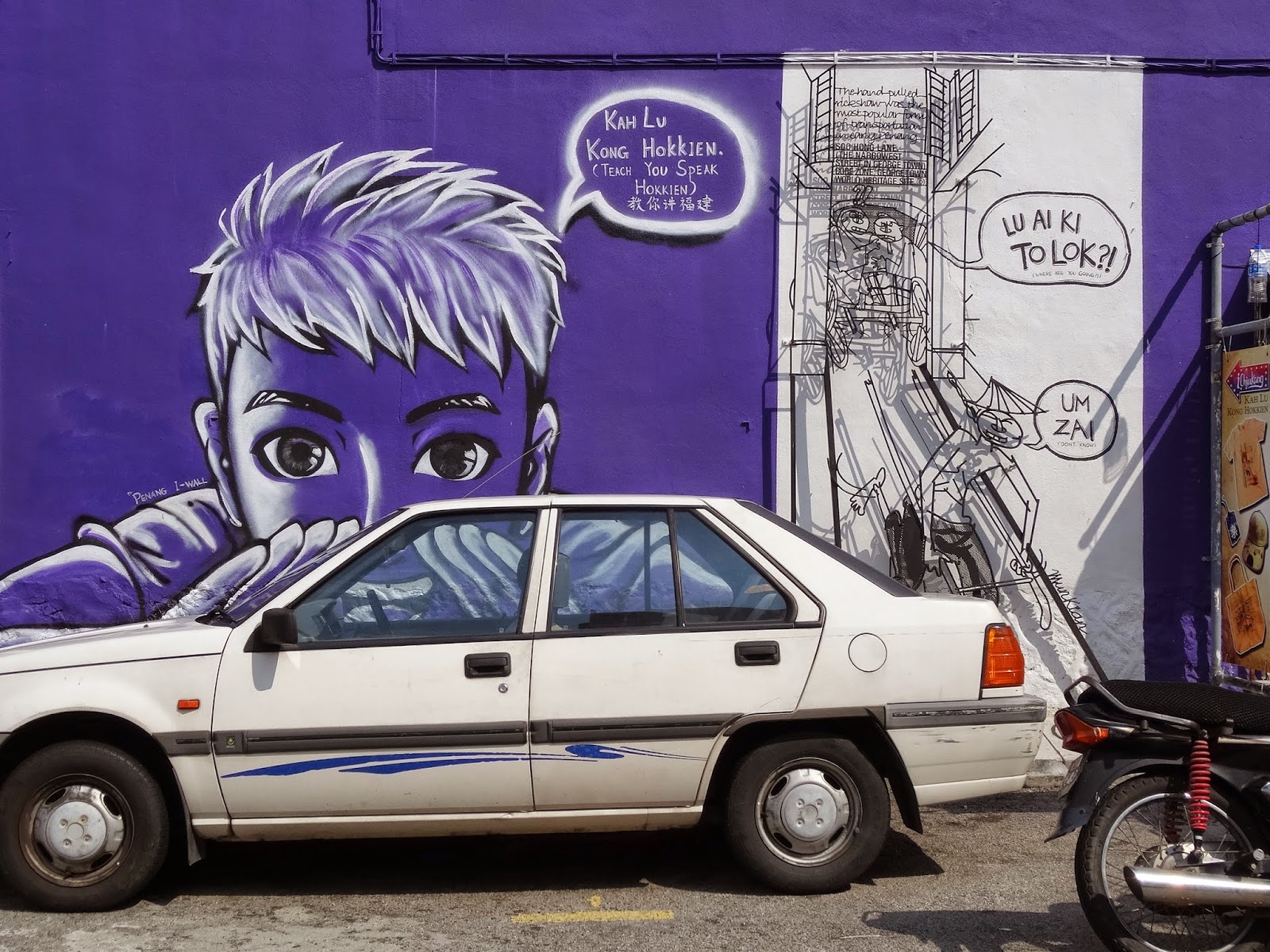 Nearby is another mural -- this one with the additional
function of teaching some Hokkien words! -- by Penangites
Jim Oo Chun Hee and John Cheng 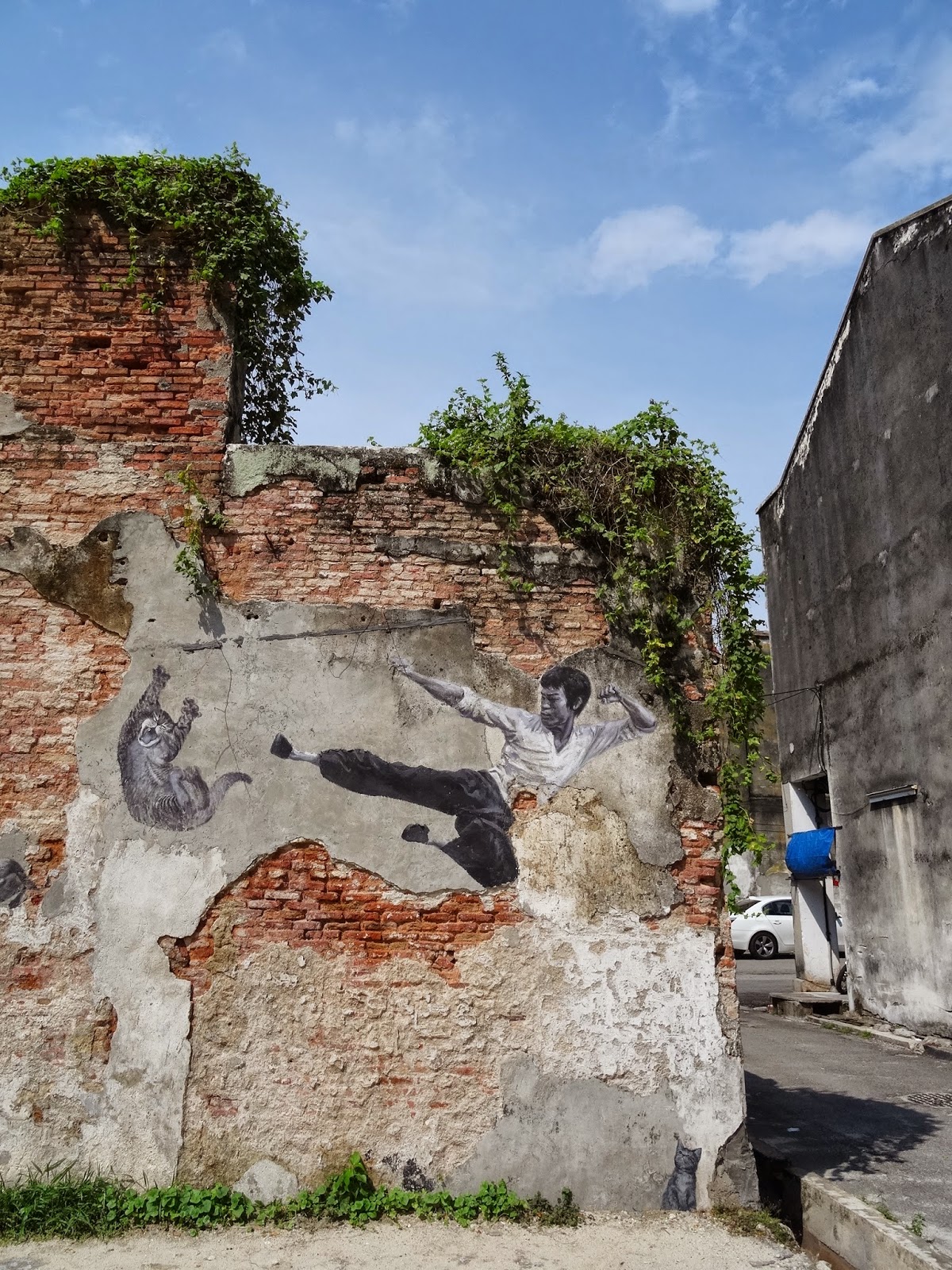 The Real Bruce Lee Would Never Do This --
that's the title of this mural by ASA
(i.e., Artists for Stray Animals)! ;b

A few months ago, I happened across a travel blog called Twenty Years Hence that features beautiful photographs and captivating writing by Stephenie Harrison and Tony Kuehn.  In late February, they posted about their Penang experiences, and I found myself being intrigued not only by their impressions of familiar sights (and foods) but also by their having highlighted street art that I hadn't previously come across.

Starting in Armenian Street, I found the area to be bursting with more activity than on my previous visits.  While some might complain that it's become more touristy than before, my feeling is that it also seems less seedy and down at heel than before.  In other words, the noticeable change seems more for the good than bad.

As for the street art itself: I really liked what I saw -- be they works by foreign-born or native Penang artists.  Much of them have an attractive creativity and humor to them -- and, to my mind, add color and interest to the urban landscape. Best of all, I like how so much of them possess culturally appropriate subject matter and are so much more than just spray painted initials or, worst of all, angry graffiti.  All in all, the works reflect well on those who created them, and also the culture, society, city and state that look to have inspired them.
Posted by YTSL at 11:44 PM

What wonderful street art. Thanks for sharing it.

You're welcome re the sharing -- and here's also pointing out that the links I provided contain interesting info re the street art, artists, etc. :)

Speaking as one who has an affection for Penang, I was hoping you'd post another entry on George Town. Images of street art that I've seen in travels frequently stay with me as strongly as historic sites do...These street wall paintings you post are especially memorable because they are enhanced by the conditions of the walls themselves. Your top photo of the boy on the motorbike is a perfect example of this because the eroded brick walls reveal layers underneath. Stare at it long enough and the wall becomes a three-dimensional abstract artist's canvas.

Enjoyed your links you provide in the text. (Also, YouTube videos of tourists posing in front of murals are worth watching)...Well, now that my online imagination has been captured by Penang, I can't resist indulging in a private virtual reality fantasy...I'm in George Town, having a bowl of Assam Laksa. Then I walk over to Chew Jetty to absorb some local color. Then I continue my Peranakan adventure by experiencing the amazing Clan House interior of the Khoo Kongshi...Then I'll seek out some Hokkien mee...I'll finish my tour by taking a bus to the Botanical Gardens.

Yes, I agree that the street wall paintings are memorable because of the conditions of the walls (and doors) on which they're painted. On a related note: some of these murals were done for a local arts festival -- and aren't meant to last forever... and the conditions of the walls, etc. have ensured that some of them are indeed quite a bit more emphemeral than some people would like.

And it's interesting that you wrote about assam laksa and Hokkien mee because... well, check this blog next week! ;b

Thank you for sending me this great piece of public art!

You're welcome, and thanks for appreciating it! :)