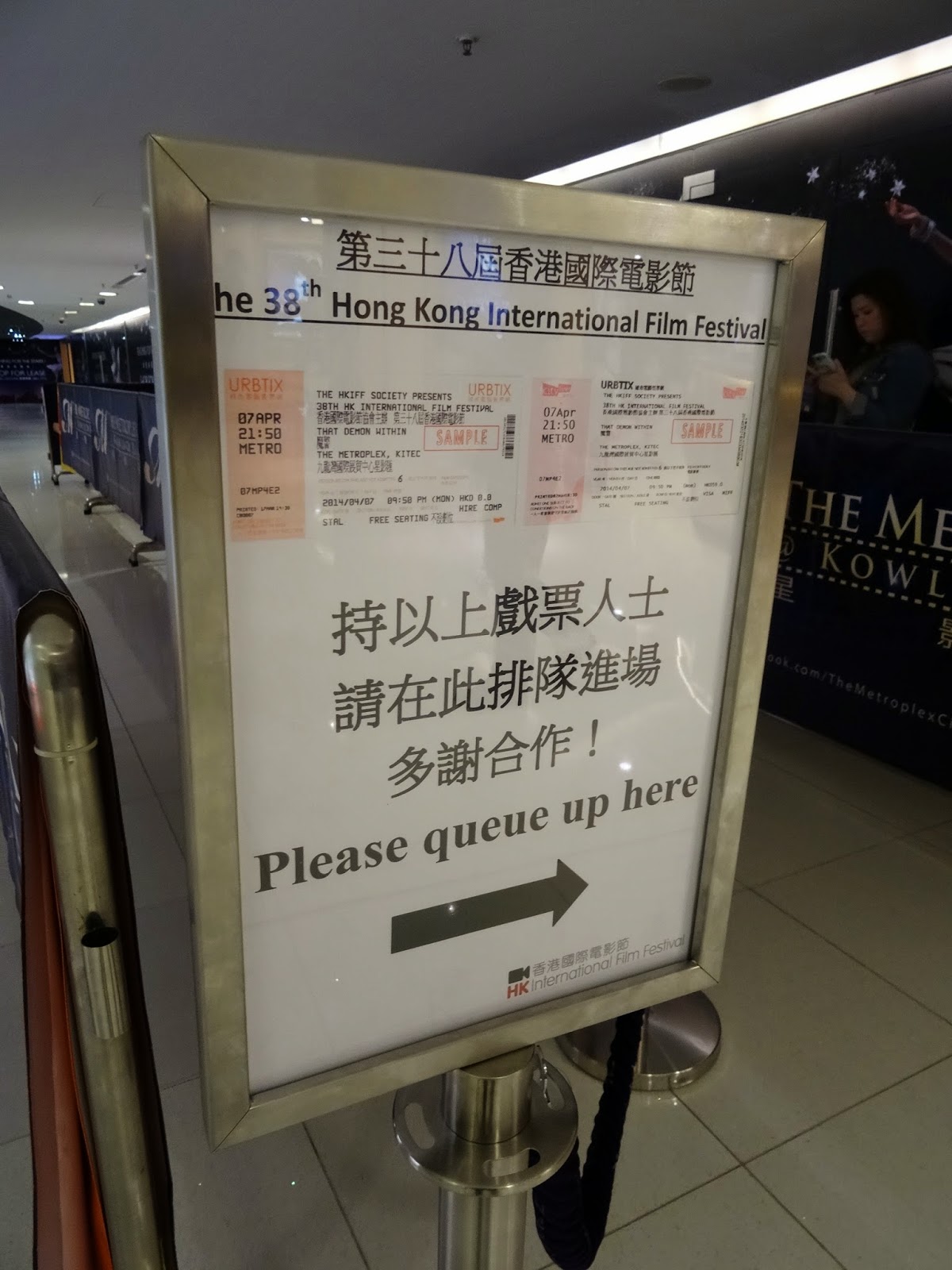 Queuing up for screenings is part of the
Hong Kong International Film Festival experience!

Long before I became a born again Hong Kong movie fan and general film geek, I was a fan of the Philadelphia-born woman who would go on to become Princess Grace of Monaco.  While in my early teens, I devoured biographies of Grace Kelly as well as viewed as many of her movies as I could -- including High Noon, Rear Window, To Catch a Thief, and Dial M for Murder.

Prior to attending the HKIFF screening of Dial M for Murder 3-D, the most recent Grace Kelly film I had seen was The Country Girl not long after I had returned to Asia from the US. Finding that drama in which she had the title role to be on the disappointingly dated side, the experience made considerably less keen to check out certain old Hollywood classics, for fear that I'd have similar reactions to them.  Nonetheless, when I was presented with a chance to see this classic Alfred Hitchcock movie the way that it was originally intended to be seen -- in 3-D -- I couldn't resist going and doing so, albeit while telling myself to be sure to go into the viewing with low expectations.

Perhaps because I prepared myself for this 1954 suspense-thriller to be on the dated side, I was much willing to overlook the at times overly passive of the lead female character (played, of course, by Grace Kelly) and her general reliance and trust of her husband (essayed by Ray Milland).  Also, when the male characters -- among them, the chief inspector (portrayed by John Williams) who was investigating the murder case in which she got embroiled in -- behaved in ways that would be immediately called out for being sexist nowadays, I went with the flow, ascribing it all to it being the normative behavior in 1953-1954 (i.e., when the movie was filmed and originally released in cinemas).

Whatever the reason, I found the film to be an absolutely wonderful work well capable of entertaining audiences some six decades after it was made -- and over a short period of time too (seeing that it was shot over a course of just 36 days)!  In retrospect, I think that my experience of re-viewing Dial M for Murder was enhanced as well by my actually not remembering all that much of the details of this classic film from when my first viewing of it decades ago now.  This way, the twists in the tale weren't anticipated and thus came across (once more) as clever and creative delights!

Additionally, although I'm by no means a big fan of 3-D, I appreciated the way Hitchcock used it to bestow the film's visuals with depth.  Alternatively put: instead of the 3-D effects being used for cheap thrills or gags the way that still is often the case in the hands of other filmmakers, the Master of Suspense utilized it to enhance the sense that one was getting a peek into a world that, while fictional, also had its roots in a reality not unlike the viewer's own.

At the risk of sounding puerile, there's another visual element in the film that I found eye-catching: i.e., the leading actress' actually quite considerable bosom!  Seeing them encased in the red dress the blonde beauty wore when she first appears in the movie, I got to remembering something I had found amusing when reading about it in one of those Grace Kelly biographies all those years ago: that when Alfred Hitchcock had seen her in a gold costume on the set of Once a Thief, he had cracked that "there're hills in thar gold!"

Thanks! Re my favorite Hitchcock film: It's been a while since I saw it but I'll still go with "Rear Window". :)

Yes, Grace Kelly was good in Dial M for Murder, but a 9.5 is a very generous rating for this movie...Glad you mention Rear Window - now there's a true candidate for a 9.5 or 10!

Maybe you should see the movie in 3-D on a big screen at a film fest. It really works when viewed in such a setting! :)

(In contrast, "Vertigo" hasn't stood the test of time well for me and when viewed on a big screen. It's so obviously a dummy falling down from the tower in a key scene. ; ()

I wanted to thank you for saying that Vertigo "hasn't stood the test of time for me." Not only is it Hitchcock's most overrated film, it's one of the most overrated films ever made. This film was rated in a critics' poll as The Greatest Film Ever Made. Do you believe it?...An artificial, convoluted plot in a film that was a commercial failure in it's initial release - for good reason...However, the musical soundtrack is great and I play it often.

I wonder why those critics, etc. love "Vertigo" so much? Is it James Stewart, the San Francisco locations... or because many of them suffer vertigo? I did like seeing Barbara Bel Geddes in it though... ;b