Last month, on my second hike up to the Luk Wu Plateau, I spotted a fairly sizable lizard on a tree and snapped some photos of it that I felt bound to share the very day that I took them.  But it's only now that I'm putting up the following photos taken on my first hike up to Luk Wu Plateau -- one that saw the friend I've taken to calling my regular hiking companion and I going along the Luk Wu Country Trail that took us through some rugged as well as scenic landscape, and gave us a sense of accomplishment to complete on a fairly hot (circa 26 degrees Centigrade) day:- 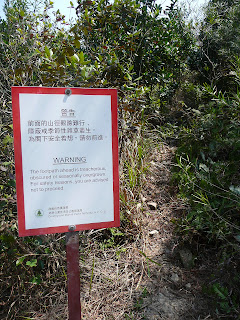 Responsible hikers that we are, we passed by this sign
early on our excursion but did not go directly beyond it! 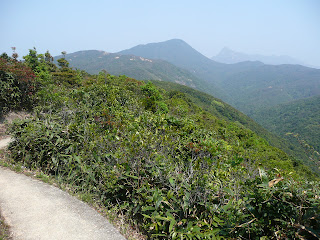 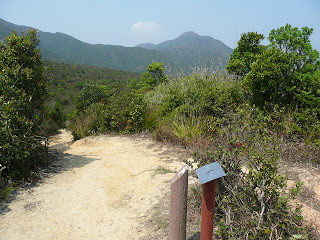 Without the signs in the foreground, wouldn't this
setting look like it could be one for a cowboy --
as well as period martial arts -- movie? ;b 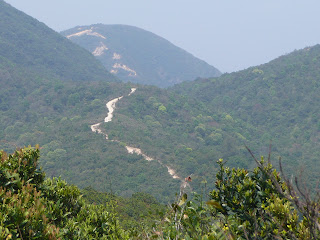 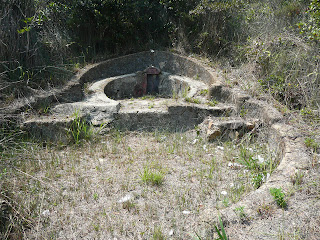 This grave is a reminder that up until about half a century ago,
a populated hamlet actually existed in this area
that now is part of Sai Kung East Country Park 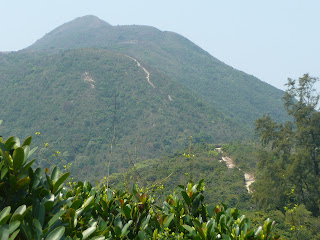 Yes, it was indeed a trifle intimidating to realize that
our hike that day would involve going along that uphill trail 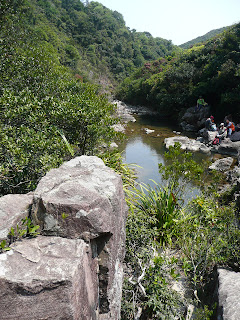 Before that, there was this stream area to enjoy being in
-- or there would have been if not for a really loud large
group of hikers (complete with walkie talkies and
transistor radios!) picnicking out there! ;( 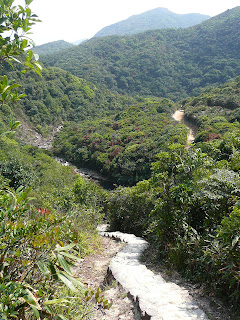 Never mind -- we charged ahead... and soon
were able to enjoy the scenery and
the hike in general in relative peace! :)

That signage would tempt my regular hiking companion!

If I ever visit Hong Kong again I'll try and hike this trail. I'm looking forward the next post about it.

Would you go along with his/her decision? If so, you (too) are a far more daring hiker than I! ;b

It is indeed a nice hike -- and one that takes you into an area of Hong Kong few people have ventured. Thanks for checking out and commenting on this post. Hope you'll do the same for the next photo-essay! :)

Love the sign--"treacherous" has the right ring to it, between dangerous and sure to cause your death. And the hiker is simply advised not to go further, not forbidden or prohibited. As if it were saying "If you are smart you won't go this way because the trail will be very difficult; if you decided to continue you have been warned."

The uphill part of the trail (actually this side looks all uphill) in the third and fifth pictures looks intimidating, less so for the steepness than for its uphill length. Even a slight slant upwards (and that trail looks more than slight) can make on weary if it goes on for long enough. You and your hiking companion must be quite fit.

Haha and yeah, definitely, re "treacherous" and "advised not to go further"!

Re the uphill part of the trail: yeah, there's quite a bit of it -- and that section shown in picture #6 has one of the steepest gradients I've hiked up. All in all, it really did feel make my hiking companion and I feel good that we were able to successfully tackle this trail -- and yes, I thought it a good fitness gauge. :)