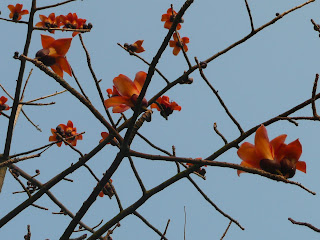 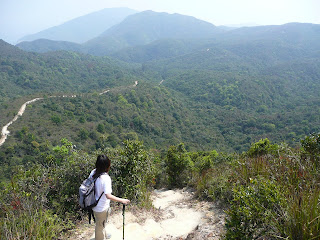 My regular hiking companion looking back and down
at part of the Luk Wu Country Trail in scenic
Sai Kung East Country Park that we hiked on earlier today
To those who wondered whether I was okay after I didn't join in yesterday's Photo Hunt, I thank you for your concern and please don't worry. It's just that I found myself spending so much time online following the ongoing catastrophe in Japan since first learning about the earthquake and tsunami hitting that country on Friday afternoon that I felt I needed to go and spend some time outside doing such as appreciating the more positive side of nature.

So yesterday, I took my mother (who's here visiting) to one of Hong Kong's naturally scenic areas in Clear Water Bay where we strolled along a road that gave us splendid views of the coastal area and Clear Water Bay's two public beaches on one side and more hilly country, including High Junk Peak and its surroundings through which the High Junk Peak Country Trail runs, on the other. Gazing at those sights and at plants showing clear signs that spring is here, and enjoying the feeling of the breeze blowing from the sea, it felt as though so much was good with and in the world.

Then, earlier today, I bowed to temptation in the form of beautiful weather (complete with welcome blue skies) and went off with my regular hiking companion on a hike in Sai Kung East Country Park. The Luk Wu Country Trail offers the attraction of taking people up to one of those plateaus in Hong Kong with 360 degree views where nary a building can be seen. For much of today's hike, my regular hiking companion and I also found ourselves not within sight of another human being except for each other.

Those two elements alone would be very attractive in and of themselves. So it really is a bonus that the trail offers up beautiful vistas for much of the way. And while some people might see the exertion required to hike this trail as a negative, I honestly feel that this kind of thing helps make one appreciate all the more that nature's beauty -- or just a general engagement with nature -- is not one that is given entirely freely.

Put another way: we should never take nature -- and its benevolence -- for granted. And like the great Japanese filmmaker Hayao Miyazaki taught via such as My Neighbor Totoro (and to quote from Stomp Tokyo's review of the film), "although nature seldom intends to hurt people, it can be dangerous and should be treated with respect." (And yes, I do think that living in a land like Japan, where natural disasters are unfortunately a part of life for many people, has informed Miyazaki's way of thinking as well as imagination -- cf. Ponyo on the Cliff by the Sea and the admittedly far less destructive tsunamis in that lovely gem of a movie.)
Posted by YTSL at 10:39 PM

Love your post. I've been trying to put my own thoughts into words in my blog and everytime I wrote something it was just depressing and didn't sound right.

I wrote an entire post on the way to work this morning and then decided not to post it.

Your post is a very timely post, for me at least. And if you're okay with it... I'll just post a link to your post in my blog today because I could not possibly express it any better than you.

thank you,
just me

As I told you via e-mail, I'm flattered that my post speaks to you and that you feel that it can speak for you. I think we do share a lot of good feelings for Japan, its people and culture. I really do wish them well and am confident that they will survive all this -- it's the pain and suffering in the meantime that I so wish that they didn't have to feel and go through.

Thanks for letting me link to you post. For some reason, it just made me feel so much better yesterday morning. :)

Yeah, I know we share a lot of good feelings for Japan, its people and culture. :)

I know Japan will recover too and perhaps recover even faster than expected. My friends all speak with so much strength, that I almost feel ashamed that I was such an emotional basketcase. :) It's strange but they are in a more vulnerable position than I but yet they can inspire me and give me strength.

Like you I know they will survive, the Japanese have that strength and that spirit. But like you said, it is the suffering in the meantime that I too wish they didn't have to go through.

Re the Japanese: some people might see their reaction for the most part as repressed -- I choose to see it as disciplined, stoic, enduring and strong. These are a people, culture and society used to enduring hardship -- and coming out better for doing so. There is so much to admire and that the rest of us can learn from them. Such a people do not deserve to have to go through so much -- and yet, when doing so, I honestly do think that they generally serve as an example and inspiration for others.