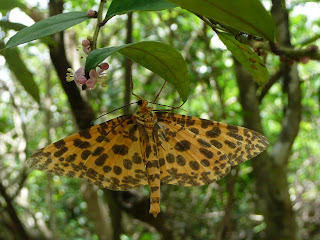 A moth so colorful it's easy to mistake for a butterfly! 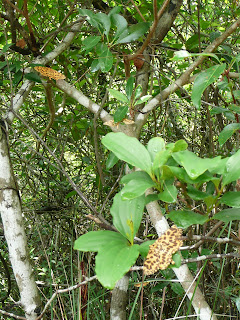 Easy to spot, they like to congregate and
also are very good at staying still for photos! ;b 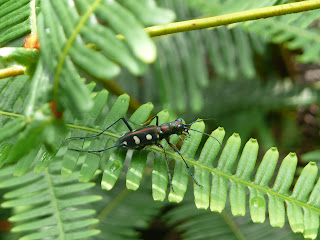 In contrast, tiger beetles seem to hardly ever stay still --
so I'm really happy I managed to get this photo of one today :)

Now that it's close to mid May, the temperatures have gone up considerably here in Hong Kong -- with one day already having had a maximum temperature of 33 degrees Celsius.  In addition, the humidity levels have gone up quite a bit this month -- and the air this afternoon was particularly thick with moisture, seeing that there were thunderstorms at around 9am this morning.

By around 10.30am though, the skies had cleared enough that two friends and I decided to go ahead and go out hiking on the Sai Kung Peninsula this afternoon.  And while the 9 kilometer trail we elected to go on was easier than the ones we go on in cooler and drier weather, it still did yield some pretty vistas -- and a number of cool insect spottings.  (Incidentally, early on our hike, we also rather incongruously came across couples in bride gowns and formal suits out in Sai Kung East Country Park having their wedding pictures taken by professional photographers -- including on actual hiking trails as well as a country road!)

Re the insects: we saw quite a variety this afternoon but members abounded of two species in particular.  The first of these were fluttery creatures so colorful and beauty I had assumed were butterflies -- but, thanks to the powers of Google and Hong Kong Outdoors' Martin Williams, I now know they actually are orange magpie moths.  A familiar sight on many a hike I've gone on in Hong Kong, I've especially noticed their presence on recent treks on Lantau Island as well as in the Sai Kung Peninsula.

The second of these is one of those species of insects that it took me a while to notice but after I did so, felt like they were everywhere in the Hong Kong countryside!  Previously identified on this very blog as a tiger beetle by Phil of Hidden Hong Kong (and Macau), I've able to more precisely identify the colorful species commonly seen in Hong Kong as the Japanese tiger beetle (aka Cicindela japonica) -- with the wonders of internet (re)search further yielding the information that they belong to an order of beetles that are the fastest land running animals on earth!

In light of this piece of information, I truly am delighted that I managed to get as good a Japanese tiger beetle photo as I did today (see above, please!).  An additional note for those who have not seen these creatures in the flesh: they can appear to fly as well as run very fast!  And yes, I really do they are pretty as well as fascinating to observe in action!! :b

You learn something new every day. I always thought they were butterflies!

For a long time, I thought the same! But amazing what information one can learn thanks to the internet these days, eh? :b