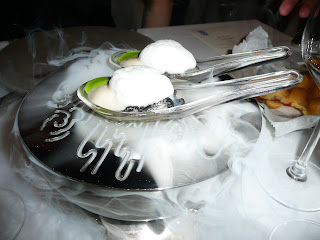 Oysters with spring onion, lime, ginger cloud and "parfum
du Hong Kong" -- the first -- and best -- course of
a 15 course meal I had at Bo Innovation this past Monday 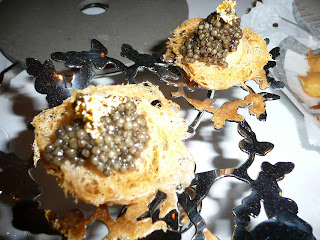 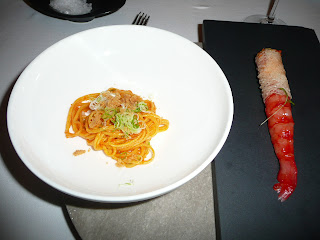 "This is horrible."  This was not a remark I ever imagined that I would utter -- not just once but, in fact, twice -- while dining in the 2 Michelin star, etc. Bo Innovation.  For that matter, this is not a remark I would have uttered for -- or during -- the first eight courses of my dinner there this past Monday.

But, truly, "horrible" was precisely what I thought of the taste of course #9: an intended palette cleanser of a sorbet made from (Chinese) hawthorn and beetroot: two strong tasting ingredients; one of them very sour and the other indescribably earthy, bitter and foul!  And ditto re course #12 -- or at least the part of it that was made of Hong Kong style egg waffles served with condensed milk, a sauce made out of pine nuts and an absolutely wasteful amount of grated bits of strong tasting black truffles -- a simultaneously decadent and disgusting tasting concoction that was largely savory, yet was meant to be accompanied by a dessert wine!


For that matter, I also didn't care for one of the three ways in which a pineapple was prepared for course #13: i.e., in another sorbet like creation, only sandier and mixed with spicy peppercorn.  Actually, I really didn't care much at all for any of the dinner's three dessert courses -- and so much so, in fact, that I literally was left with a taste in my moment that was so unpleasant that I felt obliged to go put some other, more pleasant food in my mouth in order to take away the unpalatable taste that had come courtesy of at least the final few courses of dinner at this much vaunted Hong Kong dining establishment.

Admittedly, I could be said to be predisposed to loving the first five courses of the chef's table menu at Bo Innovation on account of their core ingredients of oyster (course #1), caviar (course #2), Iberico ham aged for 36 months (course #3), foie gras (course #4) and har mi (course #5) being among my favorite foods.  But the fact of the matter is that I also loved the way they were imaginatively combined with other unlikely ingredients -- for example, rich foie gras with pungent mui choy (preserved mustard greens).

In addition, although they weren't super tasty, I did appreciate the culinary creativity and technique that came from serving a whole unpeeled cherry tomato on a plate that also included a tomato flavored marshmallow and a tomato taro pastry concoction (course #6) and the restaurant's signature molecular xiao long bao (course #7).

The first hint that not everything would be to our liking came though with course #8.  To be fair, there was no faulting its main ingredient -- a sumptuously juicy piece of lobster.  However, given how fantastic that piece of lobster was, it really did sacrilegious for its taste to be "diluted" by way of it also being served atop star anise butter and topped by a slice of black trumpet mushroom, a glob of corn sauce and a over-the-top dollop of sea urchin!

Then came that awful "palette cleanser" that I fear damaged my palette more than readied it to enjoy the tastes of other food served at that dinner.  Following it was a serving of wagyu beef accompanied with a slice of truffled tendon, daikon and spiced consomme (course #10) that my dining companion found very much to her liking and a serving of Bresse chicken, shitake mushroom and jus with 7 years aged acquerello rice cooked in classic Chinese claypot rice style (course #11) that was not unpleasant by itself but was on the too heavy side at that point in the meal.

If dinner had ended at that point, I'd have chalked down the (Chinese) hawthorn-beetroot concoction as a negative anomaly in a generally interesting -- even if not uniformly delicious -- meal.  Alas, however, the courses that followed were -- bar for a magical yin yang drink that made up the liquid part of course #12 -- uninspiring at best (the 15th and final course of "petit dim sum" included store bought confections like the infamous White Rabbit candy) and really not good tasting at all at worst.

Upon returning to my apartment, I Googled "Bo Innovation" and found a number of highly enthusiastic reviews but also at least a distinctly less positive review by a food writer whose taste I do trust.  Later, I spoke to my uber foodie friend who has been to eat there more than once and told me that she's had some superb meals there but also some disappointing ones and also remarked that the food at that dining establishment really is very inconsistent.

If the restaurant were less critically acclaimed and its prices significantly lower, I probably would be more generous in my evaluation of it -- or, at least, have way lower expectations that would have a higher chance of being met.  Still, the bottom line is that I would be reluctant to go for a meal at Bo Innovation again -- even if, as was the case thanks to the circumstances in which I went there, I actually didn't have to shell out any money to dine there!

I'm sorry the meal was so so. However the first photo is so wonderful!!!

Believe me, I'm sorry too that the meal turned out to be less than stellar. Re the photo: that points to something about Bo Innovation -- it sometimes seemed like they cared more about the visuals and visual effects of the dishes than the actual taste(s)... :S

Wow you're on a culinary rant here! But I agree, if you are paying so much you expect to have good food -- throughout the meal...

I was really shocked upon going to the Bo Innovation to find that the Chef Table Menu that I described in the blog entry costs HK$1,880 per person -- and that the wine pairing for it costs HK$700 per person. That's a lot of money -- so ya, really do think one should be able to expect good food throughout the meal for that price!