Lizard on a tree in Hong Kong! 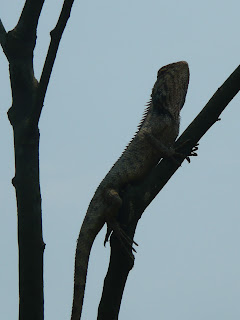 Lookit what I spotted while out hiking
in Sai Kung East Country Park yesterday! :O 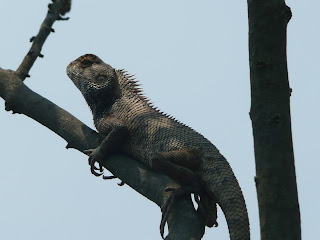 Since it's on a tree and has a crest, I'm guessing that it's
a member of the crested tree lizard species that lives
in Hong Kong (and also Malaysia!) 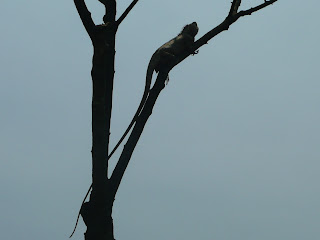 This photo gives a good idea of how long
this lizard's tail was relative to the rest of it! :O


Back when I was in primary school, I was an avid viewer of an American children's TV series called Big Blue Marble and it was through its pen-pal club/exchange that I became pen friends for a time with a girl from New Jersey who was nice enough to send me an American magazine and chewing gum along with a number of enthusiastic letters.  Several months after we started corresponding, she wrote and asked me -- in all seriousness, I'm assuming -- whether I lived in a tree.

To put it mildly, I was shocked and felt not a little insulted.  Rather than halt our correspondence immediately, however, I decided to respond... by telling her that I did indeed live in a tree house.  What's more, I had a pet crocodile that I would ride to school and back home on -- and while I was in class (in a school that also was up in a tree), the pet crocodile would wait patiently down below for me.

After mailing off my story, I figured that my New Jersey pen friend would figure out that no one in the world lived like that.  Instead, in her next letter, she told me how she thought my way of life was a great one and that she wished she had a pet crocodile too -- a reply that frankly left me feeling so flabbergasted I didn't know how to respond, and thereby caused our correspondence to come to a halt right there and then!

To be fair, Malaysia does have crocodiles in the wild (as well as such as crocodile farms).  But the largest reptile I've seen in my home country outside of a zoo actually have been monitor lizards rather than crocodiles.  (And, I have to say, I've seen more than one monitor lizard in my family house's garden!)

Believe it or not, Hong Kong also is home to at least one crocodile -- Pui Pui -- who now resides at the Hong Kong Wetland Park after being caught in a river in the New Territories!  But the closest thing to a crocodile out in the wilds of the Big Lychee that I've seen thus far has to be larger lizards like the one up on a tree that I saw while out hiking in Sai Kung East Country Park yesterday.

Like a few of the smaller lizards that I've spotted while out hiking in Hong Kong (like can be seen in this entry and also this one), the creature I came across yesterday was kind enough to stay still for a time and effectively pose for me.  Seeing that the photos I have of it are so clear, I'd appreciate if someone could identify what kind of lizard it is for me. (I'm thinking it's a crested tree lizard but confirmation -- or an alternative ID -- from someone more knowledgeable about Hong Kong's wildlife would be much appreciated!)

Haha... I chuckled to myself when I saw your blog title, because frankly I was expecting a much smaller lizard. But the one you saw is nothing to laugh about it! I would definitely feel a little nervous if came across something like that.

And thanks for sharing that pen-pal story. Yeah, it's probably best that you cut it off when you did, although you could have had a lot of fun making up further adventures about your day-to-day life in exotic Malaysia.

There are lizards that big in HK!?? Amazing!
Your pen pal story is so cute. You should have kept leading her on. I had a pen pal in Egypt when I was a kid and I expect I would have believed her if she told me she had a pet dung beetle or something, I was so fascinated with Egypt at the time!

Heheheh at your having expected a much smaller lizard. BTW, a hiker who passed by as my two friends and I were admiring the lizard asked "Is it a baby?" And yes, it was a question that astonished us because that lizard looked plenty big to us! ;b

And I'm glad you enjoyed that pen-pal story. I wondered after writing it if it might offend some Americans -- but evidently not you and sbk. (I'm not sure where Emilie's from... ;b)

I'm guessing that the lizard's head and body were about 12 inches combined. As for the tail... maybe two and half feet, maybe more!* And fortunately, it wasn't whipping its tail around. Really, it was just staying pretty still up there -- with about the only movement being the closing and opening of its eyes and mouth! ;b

(*N.B. I amended and increased my estimations after thinking some more about it!)

Apparently there are LARGER lizards than this in Hong Kong -- specifically the water monitor (lizard). But I haven't seen one... I think I might go into shock if I did while out hiking! ;b

I haven't got any more information about these reptiles. And I have to say that no one I've shown my photos of the creature to have said they've seen anything like it.

In one of your e-mails you wrote to me, you told me a friend had identified it as a Cantonese garden lizard. Hmmm... it was far away from a garden and that name sounds so ordinary while the sight of that critter really was not!

Thanks much for trying to ID it though! I do appreciate the effort! :)