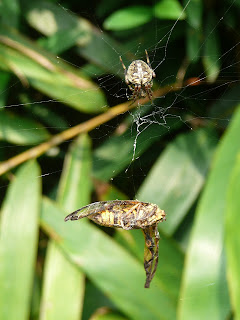 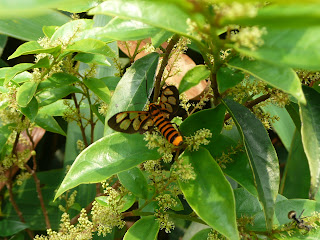 I think this is the species of bug that
the dead and dessicated form in the photo
at the top of is a member of... :S 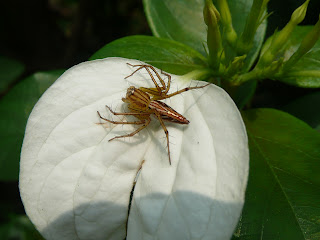 Earlier today, two friends and I hiked along Section 2 of the Wilson Trail which went up first to the top of 433 meters high Jardine's Lookout and then -- after a descent of about 100 meters or so -- 424 meters high Siu Ma Shan (whose name translates from Cantonese as Small Horse Mountain/Hill).  Because I've been along this trail before on a noticeably clearer air -- but also way hotter -- day, I wasn't so blown away by the panoramic views that came our way that I ignored looking about near my path as I trekked along this afternoon.

The visual rewards that came with this "strategy" included a small lizard that scampered away too quickly because I could get my camera out of my pocket, and an albino spider that was so tiny and agitatedly moving about that my camera refused to focus when I attempted to take photos of it.  Fortunately, I also came across other wildlife were kinder and more cooperative to shutterbugs.

In particular, on the northern side of Siu Ma Shan, I spotted a couple of two species of spiders that I don't think I've come across before -- and definitely haven't previously photographed.  They also aren't featured on this interesting page on Hong Kong spiders that includes photos of the giant golden orb weavers that I too have spotted numerous time (especially while hiking on Lantau Island but also on Lamma).

Re the two spiders (both of whose photos can be enlarged by clicking on them): The one in the first photo at the top of this blog entry was small but obviously adept at catching prey at least twice its size. It's also amazing to see how strong its strands of spider silk are as well as how its web may not be the most asthetically ideal but so very definitely does function as planned!  As for the second one which actually was perched atop a white leaf of a Splash-of-white (Mussaenda pubescens) flower, it was only after counting that it had eight legs that I deduced that it's a spider!

So does anyone reading this know the names of these species of spiders?  If so, please do share that information -- for which deed I'm hereby thanking you in advance. :b

There is a series of books in chinese and english that you can get in one of the local bookstores (forgotten the name but they have a branch in the Belchers shopping mall), it has all the insects and birds and spiders and coral and fish , butterflies etc. of Hong Kong. Quite handy to have

I think I know the series you're talking about -- and I've got two books on Hong Kong flowers from that series. Unfortunately, find that they're still far from comprehensive -- I think it speaks to the diversity of flora and fauna to be found in Hong Kong!

How do you spot these skinks and iguanas and exotic moths? All I ever see are mosquitoes!

Your comments made me smile and also made my day! :)

Maybe I hike slower than you... Also, I've found myself able to spot more creatures the more hikes I've gone on in Hong Kong. Another thing I've noticed: the harder/more off the beaten track trails yield more critter spottings than the super popular ones such as Dragon's Back... :)

Nice photos. As HKP commented you do manage to spot all kinds of unusual small creatures. I noticed this on Okinawa too that you manage to walk looking for creatures in the bushes to photo but also manage to take photos of vistas too.

I'm glad you like the photos and I'm amused that you noticed and remember my photography behavior in Okinawa... ;b