Golden hour shots from the Mui Wo to Central ferry 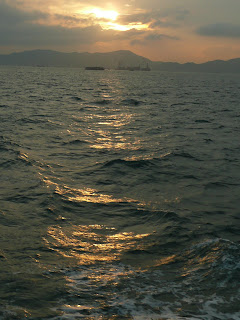 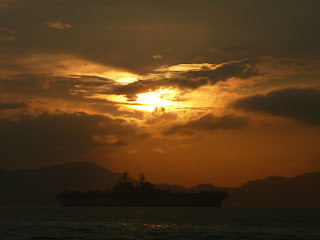 As the sun moved closer to the horizon,
the predominant colors got more intense and orange 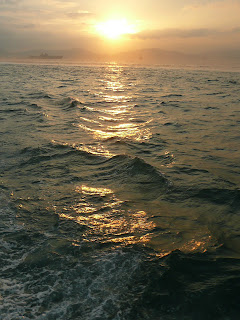 Imagine a nice breeze blowing to add to
it all making for a fine time of the day :)

On Saturday, the Hong Kong Observatory was indeed on the money with its thunderstorms forecast.  So it was more in hope than anything that I e-mailed my two hiking buddies the suggested hiking itinerary for the next day.  As it turned out though, Mother Nature decided to be kind of us -- for not only did we end up being able to go on a pleasant hike during which not a single drop of rain fell on us but we also got treated on our ferry ride out of Mui Wo (where we ended today's trek) to some beautiful views and sights of sea, sky and a number of Hong Kong's many islands.

The blue skies overhead during the early part of the hike were a welcome sight enough.  The many butterflies and other bugs and critters spotted along the way were often cool enough to merit our stopping and looking (and, when they were nice enough to stay fairly still, photographing).  And the 360 degree vistas to be had from the highest point of today's hike were quite something to behold -- and definitely worth the exertion required to get up to the very top of the hill on what was a pretty humid afternoon.

Still, sights-wise, the icing on the cake has to be the views to be had from the open portion of the upper deck of the ordinary (as opposed to fast) ferry on the way back.  As luck would have it, our slightly under one hour boat ride coincided with what is considered to be "the golden hour" in photography -- for good reason as I trust that you'll agree after viewing the photos at the top of this blog entry that I took during it today. :b

Beautiful photos YTSL, thanks for sharing.

Wow, that was a quick -- a comment just two minutes after I put up the post! :O

Hi YTSL, beautiful photos. I love the golden hour colors. Thanks so much for sharing.

Have a great Sunday.

You're welcome re the sharing and thanks for appreciating. And yes, I had a great Sunday. Since Hong Kong time is several hours ahead of the US's, it was already late Sunday night when you commented! ;b

Beautiful photos! I'm so glad that the weather turned out well for you after all. It sounds like it turned otu to be a great day.

It was indeed a beautiful day overall. So glad I got to go hiking last Sunday -- and enjoy the ferry ride back too. :)