After the previous text laden post, I reckon that this blog's readers as well as its writer could do with viewing a photo-essay. Also, considering that my first Cheung Chau hike photo-essay was put up back back in mid December, it surely is high time that I submitted another. So here's going ahead and sharing another set of photos taken on a hike -- or extended walk, really -- undertaken on a warm and humid late May 2009 day on one of the larger and famous of Hong Kong's outer islands... 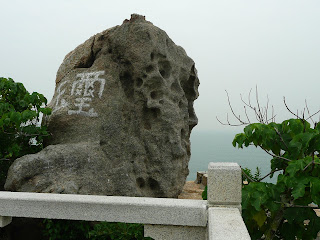 Continuing in the same vein as where I left off --
with a graffiti painted rock that, from a certain angle,
got me thinking resembles a human head 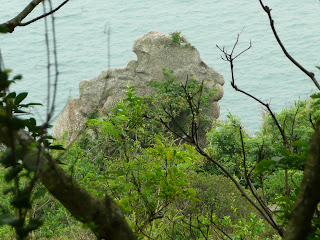 Another rock that gets my imagination going --
and, this time around, seeing some kind
of crouching simian creature! 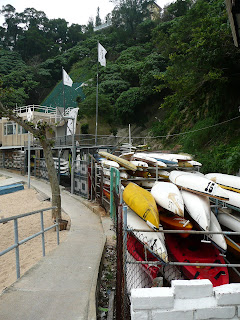 Midway through the hike, we got back near where we started
-- at the Sea Activities Centre on Kwun Yam Beach where locals
can make like Cheung Chau-born wind surfer Lee Lai Shan,
Hong Kong's first -- and thus far only -- Olympic gold medallist 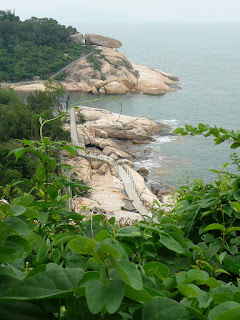 From there, we headed to the southwestern
section of the island whose attractions include
the Reclining Rock (viewable in the distance
in this photo) and a Cheung Po Tsai Cave 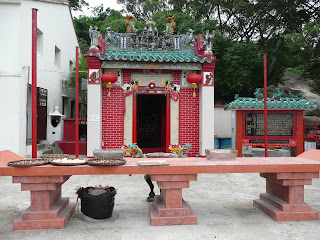 Also in that area is a modest Tin Hau Temple 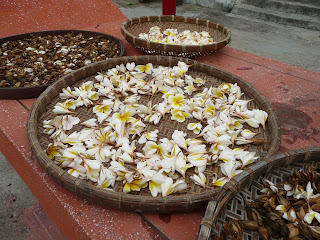 On our visit (on what sometimes felt more like a cultural tour
than actual hike), an old woman sold us refreshing tea
that she told us was made from the kind of flowers
she had put out to dry out in the open on a nearby table 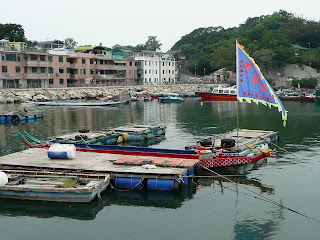 As we headed back to the main built up section
of the island along the coastal Cheung Chau
Sai Tai Road, we spied such as phoenix boats
(the female counterparts of male dragon boats) 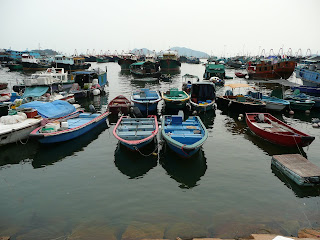 The number of anchored and docked boats became
more numerous as we neared Cheung Chau's main town
(where my party went ahead and ate before
catching the ferry back to Hong Kong Island)
Posted by YTSL at 10:10 PM

The right hand side of that second rock looks like the profile of a lion to me.

Frangipani flowers are one of my favorite. I love their look and their scent, but never knew that one could make tea from them. What was the taste like?

Yep, can see how that right hand side of that second rock can be taken to be a profile of a lion... ;b

Re the tea I drank: if memory serves me right, it was made from at least five different flowers, its elderly maker said. And, to my mind, a lot of sugar. In other words: it resembled a super sweet, strong and less delicate version of chrysanthemum tea. Not bad at all as a picker upper when you're feeling fatigued, actually! :)

Beautiful photos! I especially love the one with the boats and their reflections, and the one one with the stacked windsurf boards. (Wind surfboards? What are those things called?)

Glad you like the photos. Hmmm, seems you like the culture more than nature ones. Have been thinking of putting up a Cheung Chau culture photo-essay... and you've swayed me some more to do so! :b

Looking at the reclining rock picture, it strikes me that the Hong Kong authorities have put up a lot of stairs and walkways to make places more accessible, at least to those walking. It looks like a very peaceful place at least on the day you photographed it--the person sitting looking out at the sea (or perhaps resting or napping) on the roofed platform probably thinks so also.

The modest Tin Hua temple looks very modest--almost tiny although quite ornate. There probably isn't room on the roof for even one more statue. The more solid equivalent of a storefront church in the United States perhaps.

Yes, the HK authorities to have a tendency to put up a lot of stairs and walkways -- it actually upsets some hikers as they think the authorities are over-concretising walks. But, like you, I tend to approval of this seeking to make things more accessible and secure for people.

Re storefront temples: I actually have come across in Hong Kong -- and have photos of such to prove it but have yet to put them up on this blog! ;b

Such beautiful sights. How do you learn about these places to explore?

The reason I am asking is because I am going to HK for the month of June, I am going to be studying during the week but I am starting to wonder what to do on the weekends and you have inspired me to venture outside the city.

Yeah stairs and stairways!! I like the composition of the stairways over rocks photo with the green vegetation at the bottom and the rocks above...a friend on my recent Japan trip described the beginning of a walk we took as "Indiana Jones like" and he wasn't kidding as we climbed/slid over boulders, etc. Ugh!

For the visitor, such as the HK Tourism Board website (and, when you come over to Hong Kong, their offices to gather up brochures and ask questions of their helpful staff) and guidebooks (like Frommer's) can help point you in the right direction.

Should you wish to venture further afield, you could do such as check out my blog and click on the links I regularly point people towards in my entries.

Two points about your upcoming visit: firstly, where will you be studying? Many of the universities are actually located quite a bit aways from the central area of Hong Kong. So it might be more your wanting to go INTO town to explore the central sections more! And secondly, Hong Kong is a far safer place than most -- so don't confine your exploring to the weekends... the evenings can be used too!!! :b

Lastly (in a bit of self-promotion :S), for event-specific information, perhaps you could consider buying copies of the South China Morning Post while here and checking the daily planner (or weekly Going Out section that comes out on Thursdays)? ;b

"a friend on my recent Japan trip described the beginning of a walk we took as "Indiana Jones like" and he wasn't kidding as we climbed/slid over boulders, etc..."

A mutual friend of ours laughs at my references to the hike from hell that we went on but I have to say that I really don't care for descending steep inclines that are sans steps! I don't usually have a fear of heights but sometimes, when looking down to where I have to go after having hiked up to a high place... :S

You will see far more of Hong Kong if you go hiking. Some 60 percent of Hong Kong is country parks after all. Also, like with Cheung Chau, if you don't walk around the island, you'd just be skimming the surface of what sights it has to offer.

Thanks YSTL that definitely helps.

I plan on studying at CUHK for a 3 week Cantonese class. I am so entrenched in the dreariness of winter here that I forgot the days of summer are longer, lol, your are right I probably could use the campus as a launching point for some adventures.

I walk alot in the city but I don't hike as a rule for two reasons, one I am not in good enough shape and two, I find that most hikes are way too early in the morning for me.

The whole trip is still in the planning stage. I am still entertaining ideas of places to stay, one friend is fond of a rentaroom place in Jordan but another friend suggested the Kowloon Tong area but had no particular place in mind. At some point very soon I will have to make a decision.

Don't know if you realize it already but CUHK is located deep in the heart of the New Territories -- and with its own designated MTR station. So yeah, it should be a good launch pad for some adventures.

Can't you have housing on campus when you go over to take your course? I like Jordan fine -- and, in fact, used to favor staying at a small hotel in that area (the very one that Daniel Wu was supposed to check into in "One Nite in Mongkok", in fact!) -- but it can freak out the uninitiated.

As for Kowloon Tong: it's a weird neighborhood with upper class residences, media offices, love motels, schools and religious establishments situated within close proximity of one another!

Re hiking: Bear in mind that Hong Kong has very levels of trails -- and some of them are more like strolling in the countryside than "real" hiking. But if you're really against the idea, at least try to learn to use buses in Hong Kong rather than rely on the MTR. This way, you can see more of Hong Kong while you're traveling from one destination to another and might (will) spot interesting places to stop and/or return to another time to check out. :)

YTSL, I am not against hiking, just trying to be realistic, the walking I do is primarily on flat ground.

Thanks for the input on Kowloon Tong, that perhaps explains why I am coming up empty.

I have thought of staying on campus and the CUHK International House looks great. My concern is that I am an older woman who has lived alone for quite some time--so living in a communal setting with folks probably at least half my age might be awkward for both them and me.

Believe it or not, there are a few "hikes" that are pretty flat -- so much so that a friend of mine is able to bring her 70 something father along on them! I guess what I'm trying to point out is that quite a bit of Hong Kong may be more accessible than you think -- if only you make a little bit of an effort. But sure, you know yourself best and better safe than sorry!

More re housing: yeah, a return to communal housing can be uncomfortable after solitary living. A warning: Something else that might be uncomfortable to people -- but which most people generally have to deal with in Hong Kong -- is living space that's tiny by many other territories' standards.

No, YTSL, I didn't realize that and that sounds much more doable for me. Like many others one of my New Year's resolutions is to get into better shape ... we'll see I have 5 months. :)

I live in NYC, so I am more used to smaller spaces than most Americans but thanks for the warning.

Thanks for all the advice. If you think of anything else, I'd love to hear it.

One flat trail (that is, if you don't go up to check out Lover's Rock) is the Bowen Road Path:-
http://webs-of-significance.blogspot.com/2009/01/bowen-road-path-photo-essay.html

There's also what the official website for The Peak strangely calls the Hong Kong Trail:-
http://www.thepeak.com.hk/en/1_3.asp

Thanks again YTSL, you have been a great help.

You're welcome and glad you think I've been of help! :)