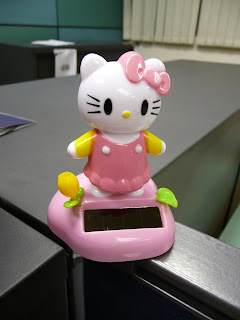 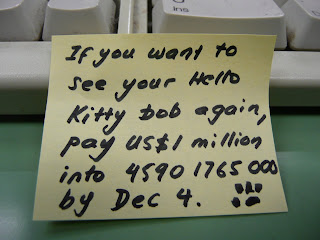 Before anything else: no, your eyes are not deceiving you. For yes, my choice of subject for this week's Photo Hunt entry consists of one of my Hello Kittys -- in particular, one that is solar powered and, depending on the strength of the light that falls on it, will either stay immobile or become variously jiggly (i.e., move with quick little jerks or in oscillation motions, as defined by Merriam-Webster Online) -- and, because I can't resist sharing a joke, the ransom note that its Kitty-napper left behind one dark December evening.

Telling the story from the beginning: A few days before this dastardly deed was committed, a very sweet colleague of mine -- for yes, this all happened at the office! -- arrived one morning at work with a new Hello Kitty gift for me. A fellow fan of kawaii things, he and I got quite a bit of fun in finding out which areas in our section of the office that this jiggly, swaying Hello Kitty "likes" best. (We know it's not alive but it reminds us of a tamagotchi in that it seems to need to be cared for -- otherwise, it will start moving in little jerks rather than smoothly and sometimes even outright stop depending on where it gets moved and such!)

Unfortunately, this swaying head Hello Kitty also attracted the attentions -- though I'll note that she wasn't attentive enough to realize that this particular incarnation of the cute cat sways from side to side rather than just bobs its head... -- of a less kawaii-loving colleague... who somehow succeeded in swiping it when I wasn't looking. Fortunately, however, she hadn't counted on my love of crime fiction having taught me to do such as track down a Kitty-napper by way of the handwriting on the ransom note...

So, to cut what could be a longer story short: yes, I got my swaying Hello Kitty back -- and the last time I looked (before I left work yesterday evening), it was safe and sound! One last bit of the story for those who've read this far: apparently, the Kitty-napper had been contemplating buying a copy of my swaying Hello Kitty, chopping that into little bits and sending me those little bits bit by bit to freak me out... So not only did I save my Hello Kitty from her clutches but my swift uncovering of her identity saved another Hello Kitty from shocking violence!!!!! :D

Cool take on the theme!

You are a Hello Kitty fan!? :P

LOL. Thank goodness Hello Kitty is safe from kidnappers for now at least.

i loe the ransom note...lol

great take on the theme! i love Hello Kitty. :)

Oopss.. we better watch out for the kitty napper as well... We are all living kitties... LOL!

That's a great story behind your Hello Kitty!

I'm a kitty; however, I don't do Hello:
http://www.sparklecat.com/diary/photo-hunt-jiggly

Yes, indeedy, re my being a fan of the cute cat! :DDD

Thanks and am glad you found the post funny (AND read it in its entirety!). :)

Yes, well, I told the unrepentant Kittynapper that if ANYTHING happens to Hello Kitty, I know it's her who did it. So... ;b

Re the ransom note: I think it's the paw print that makes it particularly classic, don't you think? ;D

I think you're safe. For one thing, the Kittynapper's a DOG lover. For another, she's thousands of miles away from where you live... :DDD

Do you do "Hi" at least? Or are you even more silent than Hello Kitty? ;)

Haha I am glad you foiled a Hello Kitty fiend! Have a freat weekend

Mine's published, but kind of far fetched for the theme. Stop by, won't you?

Oh my I love hello kitty!! Now I am thinking of visiting the San Rio store at the mall hehe!! Happy weekend!

how cruel! but am glad the kitty's back!

What a fun take on the theme. I think you need to take a finger printing kit into the office just in case...

Oh my gosh, that story is hilarious! It seems you work at a very fun place (or very strange!).

I have heard of Kat Nip, but Kitty Napping takes the cake!
LoL~

Shock! Your co-worker would do such a thing? Ok, I'll admit, I might also chop up a Hello Kitty for a good joke.

glad to hear your HKitty is safe and sound. happy weekend.

A 'technicolor' blog (that's a 60s word) with lots of hues in between.
Keep it going. Enjoying it.
Cheers

This story is so funny. Did you and other colleagues have to plan and execute a Hong Kong movie like caper to get the $$$ to save Hello Kitty????

Do you mean Hong Kong, Hello Kitty, or both? ;b

Thanks -- and hope you have a good weekend yourself! :)

Well... I think we all had to be more creative and imaginative than usual this week... ;b

Thanks! And have to say: was shocked as well as amused by the dastardly act!!! ;b

Heheh re your categorization of my work place. And yes we do work -- and hard -- but we really do have a fun moments! :)

Nooooooooooooo!!! No chopping up Hello Kitty under any circumstances!!!!!!!!! ;(

Glad you're enjoying reading my entries (as well as looking at the photos). :)

Thanks -- and you too re the happy weekend part! :)

Yup -- see the solar powered panels at the front of it? :)

Thanks for the visit and nice words. :)

Nah, *this* detective pretty much tracked down the culprit on her own... but then she phoned her boyfriend and complained of being named, shamed and giving the evil eye by a bunch of us for her sins!!! ;b

It's so cool that you guys had so much fun with it. Great take on the theme! This was a tough one but yours was just right.
Drop by and check mine here.

Kitty .. i got a few of them too from benghui's younger days :)

Thanks for appreciating the fun of it all. :)

Hello Kitty's not just for kids, you know!!! ;b

Don't know about adventure but fun sure was had by a few people! ;b

Really funny story! (And a kawaii bit of jiggliness!)