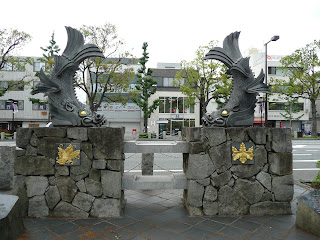 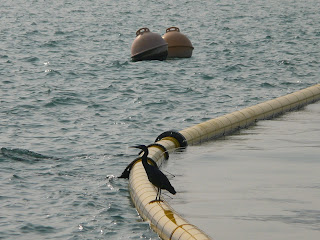 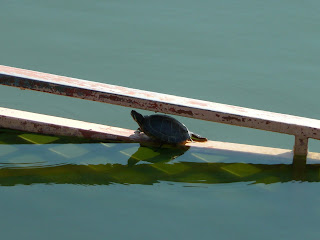 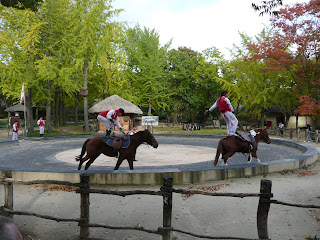 In honor of its theme for this week, I wanted to make it so that my Photo Hunt entry's balanced in presentation as well as filled with photos illustrating the concept of balanced -- hence my going with an even-numbered four (rather than, say, one or three); two on either side of the Photo Hunt banner. Even better, after selecting the photos, I realize that, taken together, they appear to be balanced in subject matter between man and nature (as well as are balanced between photos I took in Hong Kong and elsewhere).

For those who like to get more details for each photo:-

- The top most photo in this week's entry is of a pair of gargoyle-type fish sculptures on the main street of Himeji, a Japanese town that is home to a beautiful UNESCO World Heritage listed castle. Known as shashi, they can also be seen balanced on the roof tips of Himeji-jo (the castle) as they're talismans whose presence were believed to be able to help prevent fires.

- The second photo from the top is of a striking-looking bird I spotted balanced atop the line dividing up where it's safe versus less safe to swim out in Repulse Bay when I went to that southern part of Hong Kong Island for the Sculpture on Hong Kong Sea project one Sunday a couple of months ago.

- And finally, the photo at the bottom is of two horsemen doing all manner of tricks while staying balanced on their steads at the same Korean Folk Village (in Yongin) whose colorful traditional marriage "re-enactors" I also featured in a previous Photo Hunt entry a few months back. :)

Great captures! Definitely good work! Thanks for visiting!! Hope you have a terrific weekend!
Sylvia

cool balanced take on the theme!

perfect photos for the theme. i particularly like the turtle...great shot!

The Chinese always prefer things to come in pairs or in even numbers. Fengshui. :P

Very nice findings for "balanced" I had to rake my brain to find something, lol !

That's a lot of balancing going on!

That's a really nice selection of balanced! The horsemen must ahve been an enjoyable watch!

Nice ones for the theme :-)

All are good...but I think I really like the balanced turtle best.

Come visit if you have time.

everything looks balanced there. happy weekend.

Well balanced indeed! I love the fish sculptures - I seem to favour symmetry and nearly went down that path.

Wow, you put together a great collection of images for this theme. I LOVE the terrapin. :)

I played too. :) Have a great weekend!

What a fantastic post for the theme. I love the fish sculpture. Stone walls always appeal to me and having the sculpture too makes it extraordinary. These are all great shots. I used to ride and love horses as a girl and always love horse shots. Then the bird and turtle are so great too. I hope you have a happy weekend.

Balance is good in fung shui but, actually, the number 4 has not great connotations to superstitious Hong Kongers! :b

Thanks for your comments (and the profusion of excited exclamation marks)!! :)

Thanks -- and the turtle shot seems to be the most popular. Interesting...! :)

After the last few weeks of really difficult themes, found this week's a breeze actually! :b

The horsemen were indeed pretty fun to watch. All part of a pretty good folk village that I'd happily recommend that visitors to the area check out...

Interesting that there seems to be quite a bit of love for that turtle... ;b

My first inclination was to do an all symmetry entry but there just was too much else that was interesting to be so restrictive! :)

Thanks and one more vote for the turtle/terrapin! ;b

...and here's another vote for the turtle/terrapin! :D

Glad you like the post. So far so good re the weekend. Hope you have a good one too. :)

Thanks for liking and you're welcome re the sharing. :)

Wow that is one heck of a lot of balancing. I think you've thrown my brain out of balance. I always enjoy getting around and seeing the different views of this weeks theme. Yours is cool!
Drop by and check mine here.

Great choice .. or should I say a balanced choice of photos. :) I love the diversity of your selection both in location and topic. Excellent job.

I love the shot of the turtle balancing on the plank.


My Photo Hunt entry is up here:
http://bonggamom.blogspot.com/2010/01/photo-hunt-balance.html

Teehee re the thought of my entry throwing your brain out of balance! And yes, it is fun to see how people can have such different takes for the same theme. :)

Interesting that the first and third pictures seem to get the kudos... If pushed to ask, I actually like the second photo best! :)

Seems you "got" all that I tried to do with this post. Thank you! :)

Actually, it's not a plank -- though I first thought it when looking at the photo too. If you enlarge the photo, you might see what I mean... ;b

What great photos and wonderful post YTSL. I have to admit, until I read the details, I thought the second photo was two buoys balancing on the water. Duh! Some people can't see the woods for the trees.

Teehee re your comments re your initial take re the second photo! Actually, my initial aim with regards to that photo was to focus on how that line separated calmer from rougher waters. But having that bird come into the picture really was a bonus! :)

Glad you like what you saw in the entry! :)