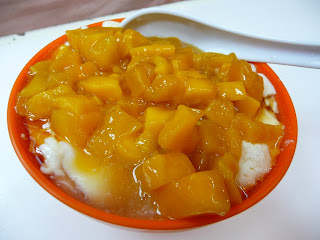 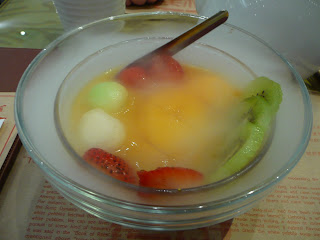 Mixed fruits and wonderfully smooth tofu served in a bowl
ringed by another filled with dry ice at Sweet Dynasty!
Is seafood meat? If, like my late paternal grandmother (who was one of those Buddhists who regularly observed a vegetarian diet during certain times of the year but would eat seafood during those periods), you don't reckon it to be so, then it can be said that I somehow have, without consciously trying to, eaten nothing but vegetarian foods the past two days.

As those who know me will realize, I'm regularly happily omnivorous and do eat my share of meat along with carbohydrates, seafood, fruit and vegetables. But as much as I am a fan of such as prosciutto, wagyu and roast suckling pig, it's true that I can get pretty happy partaking of supposedly humbler -- and healthier -- fare like tofu too. (Though it's true enough that I tend to like my tofu garnished with fruits (if eaten as a dessert) or tuna sashimi, spring onions, grated ginger and yam paste (if eaten as a cold savory dish like at my favorite izakaya here in Hong Kong) rather than plain).

Incidentally, one of the two articles I wrote for bc magazine that attracted the most attention and praise was that on tofu. (The other was -- I kid you not -- the one about Hello Kitty.) And truly, I mention this not so much to boast as to contrast this state of affairs with my never having received a single e-mail from other than friends about the many film reviews, other movie-themed articles and even interviews with such film luminaries as Peter Chan, Lisa Lu and Chapman To that I wrote up for that same publication! ;b

i love tofu too, didn't know u could add mango on top though!

Before I visited Hong Kong, didn't realize that one could be so creative with desserts -- be they one with tofu as their main ingredients or others. But yes, mango on top of tofu is only the half of it... ;b

Both tofu dishes look so yummy that I bought some dessert style tofu and fruits to have tonight!

Hope your own tofu-fruit dessert concoction was delicious! :)