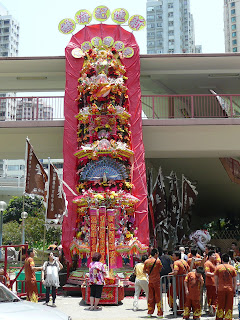 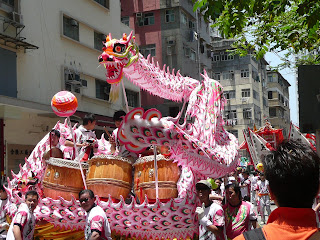 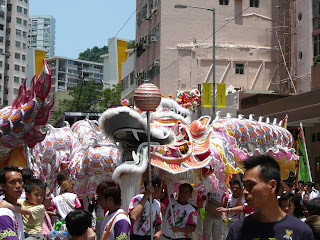 At the Tam Kung Birthday Parade held annually in Shau Kei Wan, many colorful but also undeniably large and unwieldy (the Oxford Dictionary's definition of bulky) objects are on view in their beautiful -- and at times downright spectacular -- glory. As an example, look at the giant decorative item that tops this Photo Hunt entry temporarily mounted in honor of one of the more locally prominent Chinese patron saint of seafarers in that part of Hong Kong Island that day!

Although lions, unicorns, large flags, costumed Taoist priests and other interesting sights abound at this festival with a wonderfully genuine local community feel about it, it's the long-bodied dragons that often are the most eye-catching of the festival participants. And although they are pretty visually impressive when mounted on a parade float (like in the middle photo), I have say that I'm particularly in awe of those dragons that get guided by teams of dragon dancers on foot along the parade route (as in the bottom photo).

Among other things, who knew before watching them in action that such bulky creatures could actually look so graceful when in motion? I, for one, sure didn't! And yes, here's highly recommending that you make a beeline for Shau Kei Wan should you ever be lucky enough to be in Hong Kong at Tam Kung Festival time... :b

I would love to see that in personal. They are so beautiful to me. I've always loved dragons and these are wonderful. Happy weekend.

Bulky indeed, but amazingly wonderful! I would love to see that in person one day.

Thanks for recommending the elephant movie, I'll look for it here. Happy weekend!p

I heard there are many interesting festivals every now and then. Hope to catch a few the next time I'm in HK. :)

Such lovely photos for this theme YTSL. Somehow bulky is a negative connotation but you have changed it with these photos.

Love these photos! I too would love to see this parade in person. Awesome take on bulky.

looks like an interesting procession. i'd love to be at such events.

I hope you come over and visit Hong Kong some day -- and that when you do, the Tam Kung Birthday festival will be going strong. :)

Same to you as what I wrote above for Carver. And re "The Elephant Keeper": the regular American channels might not have it but maybe you could check a specialist Thai DVD/VCD purveyor...

Time your visits well and your hopes may well come true... ;b

Thanks for the nice comments! And happy weekend to you too. :)

One particularly nice thing about this event is that it's full of people but still not overly crowded. Strikes the right balance, really! :)

Lucky you to have seen this parade. I'm feeling quite envious!

For once "buldy" is beautiful ! I wished I could have seen this life !

I just KNEW you'd have a very unique photo hunt. I so enjoy coming to visit with you on Saturdays...excellent choices for the theme.

You ask how cold is it here in South Texas?.....well, my answer [and bulky plumage of bird] is my Photo Hunt Post today. LOL

Large - yes; Unwieldly, I can imagine! but they are impressive. It must be quite a parade!

i read yr comment on tnchick about 4 thin blankets. over here i wish i could use 4 blankets. i am sweating buckets most days

i love those dragon pics. I wish I can take some more pictures of them someday:) have a happy weekend. My ph is up too.

Hmm... those "items" do look more colorful than those we have here. I'm sure Chinese New Year would be even more colorful in Hong Kong. :)

I goofed for Photo Hunters this week, and did "12" instead of "Bulky." :S Oops. But I decided to leave it up because it's appropriate for this week... and because I didn't want to spend an hour doing a different post! I hope you can visit.

That is an amazing show of bulk!

Missed those festivities. Bulky dancing dragons makes this festivities awesome. Thanks for sharing!

The festival looks great. So colorful. Is pink a significant color to the festival also?

Very colorful. And definitely some bulky stuff going on!

It looks great, such a good idea for the theme.

Would you be doubly envious if I told you that I've seen it twice in two years? ;b

As the HK Sinfonietta liked to phrase it (I have the t-shirt!), Live is Beautiful. :b

Thanks for your regular visits and enjoying my Photo Hunt entries. Must admit though that next week's theme really might stump me though... ;(

Must admit that I'm generally happy with the cool weather we've got here -- it's just that nights ARE cold and it can be difficult to get out from under the blankets in the morning! :S

Actually, I don't think I've been to a Chinese New Year parade in Hong Kong!!!

Welcome back to Photo Hunting -- even if you got the theme wrong this week! :D

Pink isn't particular significant but I have noticed that Hong Kongers seem to like it for dragons as well as buildings... ;b

Thanks for the compliments. :)

How cool is that? Great take on the theme! I love all the different ways people can approach it.
Drop by and see mine here.

I think all our different Photo Hunt entries really go to show that variety is the spice of life! :)

I second that opinion! :)

Great take on the theme. Would love to see that for real.

You can see that for real... if you visit Hong Kong at the right time of the year! ;b