Movies and the imagination

This post is for my fellow Hong Kong film fan(atic)s... those for whom being in parts of Hong Kong can feel like one has stumbled into a movie set or even been catapulted right into an actual movie...

While out hiking along the Shing Mun Valley trail this afternoon, I came across the following sight:- 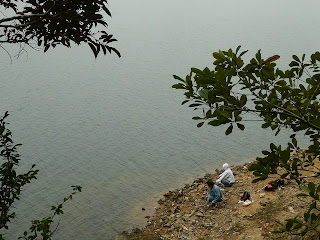 To non-film fanatics, what's on view is just two men enjoying a bit of fishing. If you're like me though, that vision can't help but get one recalling the dramatic scene towards the end of Johnnie To's Election (2005) involving the Triad leader characters played by Simon Yam and Tony Leung Ka Fai, right?

And this especially since creatures like the demonic looking one below abound in the area -- as they did in that Milkyway Image movie's memorable scene... 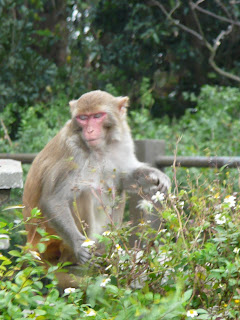 If so, then I think you'd also agree that yes, sometimes, it really just takes a little imagination to feel once again that one is living in Hong Kong movieland... ;b

Awww... that monkey's kind of cute looking, although I may think he looked demonic if he were chasing me. ;p

BTW, you've probably linked to that hiking site before, but it's new to me. Looks like a great resource!

Ah! Even before I scrolled down from the first pic I thought of "Election" and that scene, but I don't remember any monkeys.

Yeah just by looking at the photo I thought "Election!" although I don't remember the monkeys either.

Actually, I was far away from that monkey to reckon he didn't look too bad but somehow, he was in the middle of blinking when I took that picture of him and that action made him look scarier to me!

Re that hiking site: I've linked to it before but it has recently gone through a revamp and looks quite a bit better for that having happened. :)

Funny how the mind plays tricks on one, doesn't it? Now you've got me wondering about the monkeys in "Election" since I haven't seen that movie in a while... but nah, I definitely remember monkeys figuring in there somewhere! ;b

Good to hear that you've got over your monkey phobia! And hope your Nepal visit was good. :)

I think there's a shot of monkeys after the killing at the end of Election.

I gave up looking for real triad guys in Hong Kong -- or at least real triad guys that looked like the guys in a Johnnie To film -- so now I would be happy to know where the monkeys are.

Despite a monkey at an airshow almost ripping my hair out when I was 4, I have retained a life-long fascination with monkeys and apes.

You should have stayed around for the head pounding!

Hmmm... maybe it needs a bit of imagination, I grant, but I swear I've seen a few around Jordan, Mongkok and Kowloon City... ;b

"so now I would be happy to know where the monkeys are."

Try Shing Mun, Kam Shan and Lion Rock Country Parks. Kam Shan (trans. Gold Mountain), in particular, is so infamous for the monkeys that it has latterly come to be known as Monkey Hill! :S

Teeheehee -- in this case, I really hope there was NO head pounding. I'm fine with reality reminding me of movies but don't necessarily want that reality to imitate that particular movie! :D