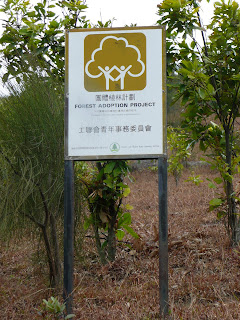 Sign spotted while out on my favorite hike
of 2009 that gets me thinking of
happy people frolicking in nature! 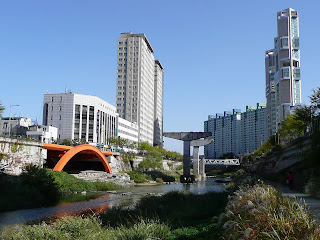 A stream runs through it -- i.e.,
the centre of the South Korean capital of Seoul
As the end of 2006 -- the first year that I had this blog -- approached, I thought it'd be a good exercise to look back at the year and recall 10 of its highlights. Since I did the same for 2007 and 2008, I'm figuring that it'd be better to continue what is now a tradition. So, without any further ado, here's going ahead and putting up my "10 best of" (in alphabetical order) list for the calendar year that came to a close earlier this week for posterity:-

1) Best Book: Although I do read my share of fiction novels, once more, it's non-fiction works that have most intrigued as well as informed this year. Two (non-fiction) books that I think are worth "honorable mentions" are The Water is Wide, Pat Conroy's 1972 memoir which I've long been looking for but finally only got hold of a copy this year, and Patrick Radden Keefe's The Snakehead (2009), a well-researched as well as -written tale of international crime, in particular the smuggling of humans from China's Fujian Province to the USA. But another non-fiction work -- Fuschia Dunlop's Shark's Fin & Sichuan Pepper: A Sweet-Sour Memoir of Eating in China (2008) -- impressed most; not least because the author successfully comes across as someone who has managed to understand not only a certain regional cuisine but also the contemporary soul along with mentality of a thoroughly complex society, culture, nation and people.

2) Best Celebrity Encounter: Late one night in 2009, as two fellow Arsenal fan friends and I emerged from a bar post watching a football game on TV, we literally crossed-paths with a smiling man we belatedly realized was Wong Kar Wai. A few years ago, that encounter might well have been the highlight of my movie fan life... yet in 2009, it wasn't even the best celebrity encounter of the year. Rather, pride of place for that has to go with another friend's and my all too brief meeting with the late Yasmin Ahmad at the Hong Kong International Film Festival -- and this especially upon knowing that I'll never have the chance to ever again speak to my favorite Malaysian filmmaker of all time by a country mile... :(

3) Best Concert: When I was little, I wanted to learn to play the drums. I never did -- getting steered to learn other musical instruments, notably the piano, instead. But percussion music continues to occupy a spot in my heart -- and it's one of the things I love about Hong Kong's performing arts scene that I've been able to attend concerts where percussionists and percussion music have been the focus (rather than merely supplying the background beats) -- including the super lively, energetic and downright energizing Four Gig Heads Percussion Concert at Hong Kong City Hall last April which featured music ranged from those composed by Tan Dun to Tchaikovsky to original compositions by a couple of the local group itself.

4) Best Dance Production: I may come across as a complete culture vulture to some people but, if truth be told, I've only started voluntarily attending and actually enjoying viewing dance performances after coming to Hong Kong. To this day, due to nightmare childhood ballet experiences (which saw me regularly saddled with a fat dance partner who would fall on -- and thoroughly squash -- me as well as a perfectionist shrew of a teacher), I can't quite appreciate ballet. But the Hong Kong Dance Company's Qingming Riverside, which had a re-run series of performances in January 2009, really is something else. An epic dance poem inspired by an ancient Chinese painting, it truly comes across as enthralling poetry in motion. And when it gets performed again, I'd definitely up for a bonus re-viewing. Alternatively put: so good it's absolutely worth watching more than once!

5) Best Exhibition: Fifteen paintings may not seem like much as far as major exhibition content is concerned. But the fifteen art works that were the focus of the Hong Kong Museum of Art's The Prosperous Cities: A Selection of Paintings from the Liaoninng Provincial Museum's antique works are special in many ways. For one thing, they date back to the Ming (1368-1644) and Qing (1644-1911) dynasties. For another, they don't just include works by court painters but also a painting by an emperor (Chien Lung). And then there is their sheer size and detail... with one work alone, Prosperous Suzhou, a handscroll completed in 1759 by Xu Yang measuring some 39 by 1,241 centimeters and containing detailed depictions of over 4,800 human figures and 2,000 architectural structures! In addition, there is the wonderful work by its curator to go to the places depicted in these paintings and record and show what can be seen if one were to go there in contemporary times -- and thereby give the art works an informative context often missing in art exhibitions whose curators tend to assume that the visitor either comes equipped with the required information or otherwise should not be visiting.

6) Best Hike: In 2009, I went on twenty-one treks that I have little hesitation describing as hikes and four more, including one along the Lung Yeuk Tau Heritage Trail and another along the walls of Suwon's impressive Hwaseong Fortress, that probably are more properly classified as lengthy walks. That which gave me the greatest sense of achievement was the one in November which saw me finally successfully scale Hong Kong Island's The Twins. And there also is a sense of achievement from completing the 20 kilometer Lantau Island hike that took me from Shek Pik Reservoir to Tai O via Fan Lau. But in terms of sheer enjoyment (and scenic beauty), the best hike honors must go to the February hike along the Yuen Tsuen Ancient Trail that began with hundreds of steps up a high hill before proceeding through wonderfully varied as well as scenic territory in the Northwest New Territories on a beautiful winter day.

7) Best Music Album: One of the very few music CDs I felt compelled to purchase in 2009 was the original soundtrack album for Yasmin Ahmad's Talentime. If truth be told, I've seen better films -- including from the sadly deceased filmmaker (whose premature passing definitely was one of the low points of 2009). But the movie's music is absolutely top quality -- in particular, Pete Teo's I Go. And how truly Malaysian as well as true to form as far as Yasmin is concerned that it is a multi-ethnic compilation that boasts Indian music (Ganesh's Theme by Hardev Kaur) as well as Malay along with English language versions of songs found in the movie's soundtrack album.

8) Best Place to Drink and Eat: As visitors to this blog know, I love Japanese food and Japanese food establishments, including izakayas. But while I early on found specialist sushi and yakitori places in Hong Kong, it only was in the latter part of 2009 that I became acquainted with an izakaya in Causeway Bay that was as good as the one I had fallen in love with in Kokura a few years back. Okinawan cuisine specialist Ku-su ya Rakuen has refreshing beer (Asahi on draft and Okinawan Orion beer in large bottles), great food (including addictive cold tofu, delicious smoked pork knuckle, a much better-than-it-sounds combination of fish roe and mascarpone served with crackers, and killer salt ice cream!), friendly wait staff and a comfortably cosy decor. The perfect reward for completing a super stressful work day, Some evenings, I don't want to leave the place and find myself wishing it had a ryokan extension!

9) Best Theatrical Production: It's a very unusual thing in Hong Kong for audience members -- be they for a live performance or movie -- to stage walk outs. But when the National Theatre of China staged its version of Eileen Chang's Red Rose and White Rose, several individuals felt compelled to do so. This fact notwithstanding, I still have no compulsions considering this controversial production -- one with incendiary lines like "the way to a man's heart is through his stomach; the way to a woman's is through her vagina!" -- to have provided with the most entertaining theatre of 2009. Who knew a Chinese government outfit could be so lively and artistically bold? Seriously! :D

10) Best Urban Rehabilitation Project: In what can seem like another life time, I worked for a company with ambitions -- or should I say pretensions... considering that it failed miserably to do so :S -- to rejuvenate a run down part of Penang's capital city. So let's just say that I have personal experience of seeing how the best intentions and plans for urban rehabilitation can result in mere pipe dreams. Which is why I figure it's never too late to laud a successful project like that which has given a beautiful new lease of life to Seoul's Cheong Gye Cheon Stream -- and ask: why can't other cities that aspire to be world class do something like it? For sure it's expensive but equally surely, doesn't it serve as a sterling example as well as representation of how a place can be modern and urban but also environmentally-friendly?

Not everything on the list is Hong Kong related but, yeah, a lot of it sure is -- and does show what's on offer over the course of a year in this far from "cultural desert". :)

And sitting at my computer I enjoyed all you hikes...my favorites were the abandoned villages/buildings ones.

I know you're a fan of "The Snakehead" but not also Pete Teo's "I Go" -- cool! And thanks much for enjoying my hike photo-essays and hoping that I blog a lot this year. :)