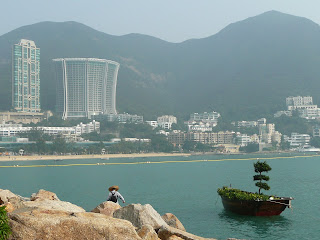 An unlikely vision that made me gasp and want to
rub my eyes upon first beholding it -- a boat
filled with plants, floating on the waters of Repulse Bay
(with The Twins -- and the two small humps
in between them -- in the background!) 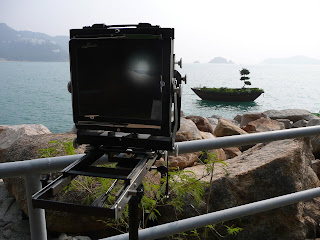 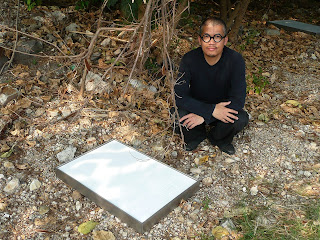 The artist behind the visions photographed above,
crouched beside yet another of his contributions to
that one-day artistic event (this one pieces of
reflective material on which shadows fall and,
in the process, create interesting patterns)
As I reported in my previous blog post, I spent part of last Sunday afternoon taking in the one-day arts event that was Sculpture on Hong Kong Sea 2009. Unlike most people who did it the other way around, I went for the option of starting my viewing of the works from the Deep Water Bay end of the scenic 1.2 kilometer coastal walk that ran through to Repulse Bay.

Thus it was that it was only in the last one third of the walk that I came across the set of works that got my vote -- and we were asked to vote by the organisers -- for favorite (or was it best? in this case, it's the same) sculpture that I saw on display that day. Heaven on Earth/ 1/2 is its title.

The following is how its creator, a Hong Kong artist who is known as anothermountainman as well as Stanley Wong Ping Pui, introduced it in the English language section of the event's programme notes:-
mirage in his eyes/
oasis from your angle
for me... it is heaven on earth

And as far as this viewer is concerned, it was a genuinely artistic effort that was magical and beautiful as well as imaginative and whimsical; and a work that showed off how the ordinary can come across as so very special when it is combined with creativity and appears in an unexpected place. Furthermore, I also consider that such a creation serves to emphasize that as long as individuals like Mr. Wong live and go about creating art here, the Big Lychee really is a long way away from being the cultural desert some people genuinely -- but, to my mind, mistakenly and unfairly -- believe it is.

Was anothermountainman sitting there all day? Did people talk with him? I like his entry and I think the idea of the whole event is very cool.

Don't know if he hung out there all day but yes, he was happily interacting with visitors to his area of the show when I passed by there in the afternoon. Glad you like his entry (and the whole event). With no comments on this blog post, was thinking people disagreed with me about his being cool art work! :S

How cool! I would love to see a sculpture event like that. Your photos (and the sculptures) are quite striking!

A colleague I met at the event mentioned that there had been a similar -- and bigger, actually -- event taking place in Australia when she visited Down Under. So, wouldn't be surprised if there were such sculpture events in the US too.

Installation sculpture like you show in your photographs can be intriguing.

The objects installed and the prospect around them or the landscape they reflects are parts of the same work of art. For those already familiar with the area an art installation like that offers, in addition to the quality and inteest of the pieces themselves, a fresh look or a new sense of wonder a landscape that had become prosaic or commonplace. It helps one to see something extraordinary in the everyday, a view from a different angle that allows us to see the familiar with new eyes.

Thanks for your interesting reflections on the subject of this blog post. And yes, I agree with a lot of what you expressed. :)