Like something out of a fairytale: Segovia's Alcazar (Photo-essay)

Earlier in my Spanish travels, I visited an alcazar in Sevilla which caused me to come down with a major case of tile envy.  Presented with another chance to visit an alcazar in Segovia, I grabbed the chance; this even though I knew full well that this particular complex actually is largely a reconstruction of the fortified palace that was one of the favorite residences of the monarchs of Castille (including the (in)famous Queen Isabella I who went on to marry King Ferdinand II of Aragon in Segovia and now lies next to him in Granada's Capilla Real) of in the Middle Ages that was burnt down in 1862.

My reason for this is that the Alcazar of Segovia is that its 19th century restorers appeared to have pulled out all the stops to (re-)create the kind of place that looked like it's come out of a fairytale.  Said to have be in the inspiration along with Mad King Ludwig of Bavaria's Schloss Neutschwanstein for the castles in Walt Disney's Magic Kingdoms, Segovia's fortified palace is a fascinating blend of Mudéjar and Gothic artistic styles.  And, unlike with Cordoba's Mezquita, I think the Muslim and Christian aesthetic elements actually go well together here! :) 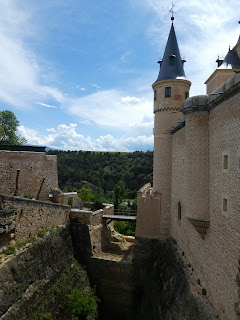 Walk across the drawbridge over the moat to
a place of visual wonder perched atop a huge bedrock! 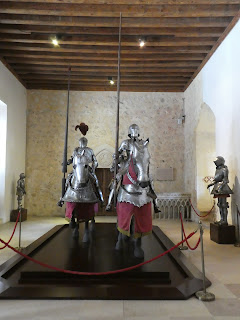 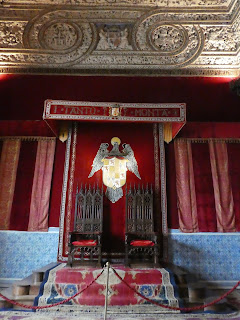 The thrones in the Alcazar may look rather modest
compared to those found in Madrid's Palace Real... 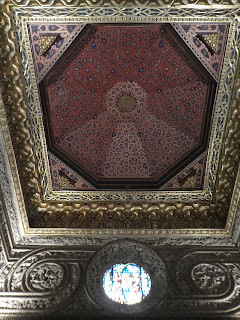 ...but a look up at the throne room's ceiling gives a clue that
memorable visuals can indeed be found in this fortified palace! 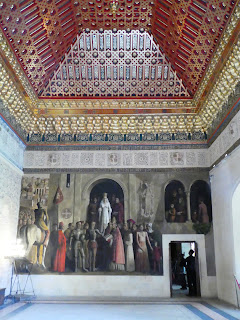 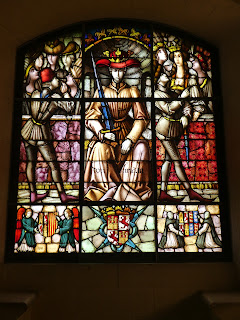 Stained glass window whose central figure is
-- you guessed it! -- Queen Isabella I! 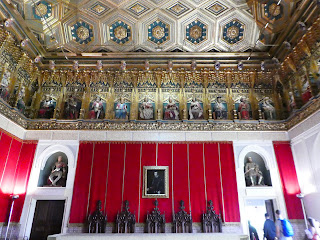 The grand Hall of the Monarchs contains three-dimensional
portraits of 52 rulers of Castile and León, and 7 queens 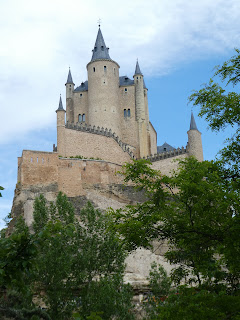 So... fantastically fairytale-like enough for you? ;b
Posted by YTSL at 11:59 PM