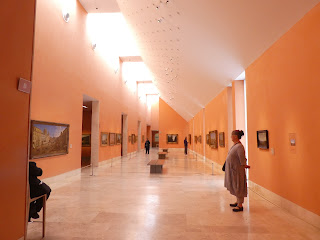 It's not only the art on display at Madrid's
Museo Nacional Thyssen-Bornemisza that's colorful... 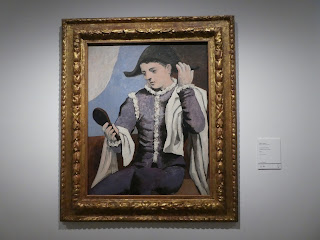 Not the type of image that comes to mind when
one thinks of works by Pablo Picasso, right? 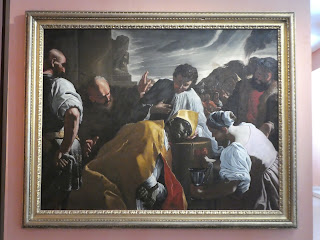 Also, this is not your typical painting of a saint, right? :O


For first-time visitors, Madrid can feel overwhelming.  It's not just that the Spanish capital is one of Europe's largest cities but the fact of it having some really wide thoroughfares along with narrow streets that can seem more like lanes or alleys, some thoroughly impressive -- and imposing -- looking architecture, and a reputation for being where many pickpockets lurk.  Throw in a disconcertingly sizable population of outright beggars along with buskers and one can feel rather stressed and intimidated when walking about the city.


In situations like this, I often resort to going to place where I feel comfortable and safe, and which can introduce me to the city's cultural riches and heritage.  Put another way: I make a museum my first port of call in the new city -- and in the case, I chose a doozy in the form of the Museo Nacional Thyssen-Bornemisza.


Opened on October 8th, 1992, this art museum located across the street from the Museo del Prado is very much the younger and smaller sibling of the behemoth established close to two centuries ago.  But I found this over 50 room museological establishment very much a visit and ended up spending almost the whole day in there!


Featuring art dating back to the 13th century all the way to that created in the latter part of the previous century, the Museo Nacional Thyssen-Bornemisza has a reputation for possessing the best collection of Impressionist art in Spain.  But while I did enjoy checking out the works by the likes of van Gogh, Degas, Renoir and Monet on display in its galleries, I actually found myself impressed by three other elements in the museum.

Putting on my museologist hat: I really liked that this modern museum opted to have quite a bit of color on its walls, and sometimes on its floors and ceilings too, rather than just go for the "white cube" look favored by many contemporary art galleries.  Rather than diminish the art on display within the Museo Nacional Thyssen-Bornemisza, I reckon that the often warm colors in the background often made the paintings foregrounded on them -- especially those with darker hues favored in certain periods of art history -- feel warmer, more vibrant and accessible.


Moving on to the paintings: I found myself being intrigued by the early works of Pablo Picasso on display in the museum, including the Harlequin with a Mirror painted in 1923.  To those who are familiar only with the artist's later works and think that he produced those Cubist and abstract works because he couldn't create realistic representations: just check those early works out to see how wrong you are -- but know that, at the same time, I'm with you in reckoning that he maybe should have stuck with realistic depictions as those that he produced are really beautiful indeed!


Another, much older painting that caught my eye early on during my visit to the Museo Nacional Thyssen-Bornemisza was The Beheading of Saint Januarius by Italian Baroque painter Mattia Preti.  For one thing, it's not all that common to see a black person in a painting by a European artist, never mind being depicted as a saint rather than servant or slave.  (In comparison: I actually can't recall seeing a single Asian individual depicted in a work on display at the museum -- although, funnily enough, there were quite a few books about Asian artists and art, including Hokusai, Hiroshige, and Ozu's Tokyo Story.)

Then there's the dramatic subject of the painting -- though, as I continued moving through the museum and also came across such as Bernini's sculpture of Saint Sebastian, I got to remembering the predilection of whole eras of European artists for depicting various martyred saints along with tortured Christs.  Indeed, if I had known how many depictions of terribly tortured saints along with Jesus Christ that I'd cross paths with in many a Spanish church or cathedral as well as museum... Well, let's just say at this point that I ended up seeing my fair share and leave it at that!
Posted by YTSL at 11:36 PM