There were a number of places I visited in Spain in which indoor photography was forbidden in parts or even all of the interior spaces where the public was allowed to venture in to look around.  They included museums (including the most famous Spanish museological establishment of them all, the Prado) and places with royal connections, including the Capilla Real (Royal Chapel) in Granada, the royal palace in Madrid and the UNESCO World Heritage-listed Monastery and Site of the Escurial (aka El Escorial) built at the end of the 16th century at a time when Catholic Spain felt threatened by Protestant "heretics".

Conceived by the very religious King Philip II to serve as a royal residence but also house a school to embrace humanism in a way that promoted the Catholic faith, a beautifully decorated library (full of books written in Hebrew and Arabic as well as Latin scripts), a monastery(!) and a grand mausoleum for Spain's royal family(!!), El Escorial is an extremely large complex with 4,000 rooms, 1,200 doors, 2,675 windows and some 24 kilometers worth of passageways!

All this nonetheless only hints at what can be seen within, which includes one absolute masterpiece of religious artwork in the form of Rogier van der Weyden's The Crucifixion along with more religious relics than I ever thought it would be possible to gather together and display in one place (El Escorial's Basilica) and also more royal remains assembled in one very cold and frankly pretty eerie series of sepulchre spaces than I ever cared to be in the presence of!  So maybe you should count yourself lucky that I don't have photographs of such places and items to share with you as well as be satisfied with the following picks of the images that I did manage to capture while there... ;b 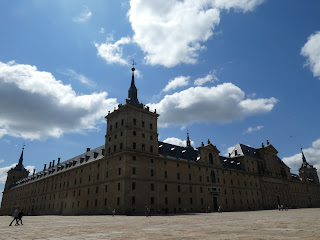 A picture which hopefully gives a sense of how enormous
-- and also visually forbidding -- El Escorial is! 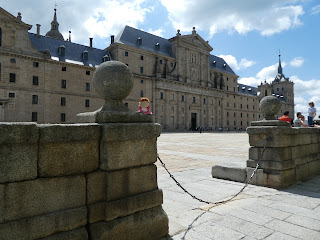 El Escorial's gray granite stones and even grayer
slate roof tiles make one want to call for a bit of color...
so enter Puppet Ponyo into the frame! :b 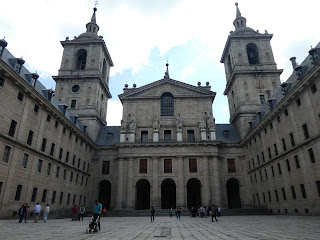 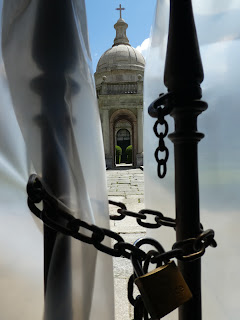 Peeking from the cloister through a chained gate... 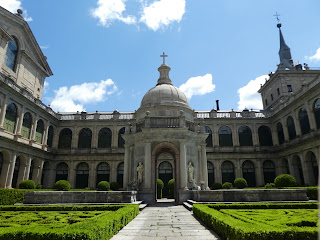 .After thrusting my camera into the space, it caught this image! 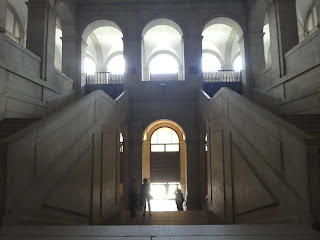 A(nother) quiet space in the cloister 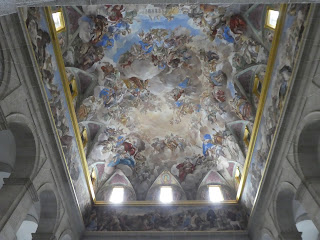 The ceiling fresco of that otherwise austerely decorated space :O 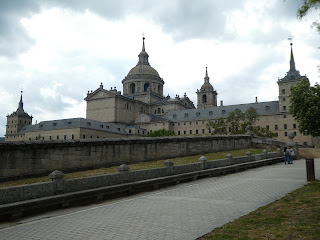 Outside again many hours later, I felt like I had only scratched the surface
of this monumental complex which I'm amazed does not attract as
many visitors as so many other lesser as well as smaller Spanish sites!
Posted by YTSL at 10:25 PM

I'm amazed at how much work it takes to keep the yard up,
Coffee is on

I know what you mean: the building is one thing; the maintenance a whole another thing altogether! ;b

That's a beautiful pic with the garden in the foreground! The cold sternness of the complex really needs some life.

Did you have a meal there? Or did you have the foresight to come back to Madrid for meals instead of getting gouged? :)

I'm glad you like that photo! And "cold sternness" is a great description of El Escorial!

I had one small meal in Segovia before venturing into El Escorial but only had dinner after returning to Madrid. Sounds like I did the right thing there! ;)

Puppet Ponyo does add some "color" to this gray "monumental complex" which has a forbidden fortress-like look to it, kind of like a Christian re-education center for fallen heretics. Seriously, regardless of their beliefs, no one can deny that this religion has inspired great art. Your link to van der Weyden's The Crucifixion is a prime example of this.

I don't know if you are familiar with Matthias Grunewald and his multi-paneled masterpiece, the Isenheim Alterpiece (1512-1516). Some of his paintings (Wiki is a good link), especially his crucifixions, border on pre-Expressionism. Someone even wrote a modern opera based on the life of this artist.

If I haven't told you before, here's letting you know that I love your descriptive prose: in this case, your referring to El Escorial as "kind of like a Christian re-education center for fallen heretics"!

In answer to your above question - yes, I did know that you majored in art history and anthropology at college, but I didn't know about your "departmental honors". You must have had some good professors to advise you on your career potential...The thoroughness of your photo-essays on museums and historic buildings and the relevant links you provide, leads me to believe that you may have taught classes somewhere along the line.