Sushi Tsubomi serves up beauty but less so taste 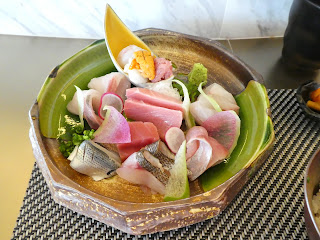 A nice-looking plate of sashimi 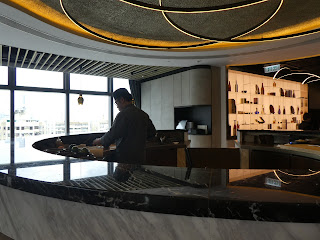 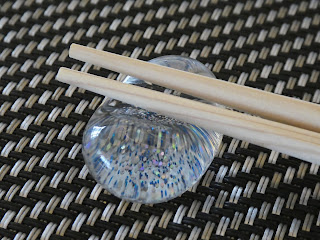 One of the prettiest chopstick holders I've ever seen!


Thanks to Daimaru (Hong Kong's first Japanese department store, and the chain's first overseas branch), Matsuzakaya, Mitsukoshi and Sogo having established branches in the area, Hong Kongers have long associated Causeway Bay with things Japan.  These days, however, the focus tends to be Japanese food, with eateries specializing in fare from the Land of the Rising Sun abounding in the area.


Among the newest of them (open just some two and half months today) is Sushi Tsubomi.  Not your average sushi-ya, it's also not your traditional sushi-ya; as one can probably tell from its executive chef (Michael Chan, a native Hong Konger) having formerly worked at Nobu and being known for making "creative sushi".  In addition, the restaurant's interior design is unlike any (other) high-end sushi-ya I've ever been to -- which has been as intimate in feel as this one is large and airy.


Thanks to my being the first customer of the day, I did get served by Michael -- who also prepared the sashimi platter I ordered (instead of my more usual sushi).  An aesthetic delight, it contained more than the eight different kinds of sashimi it was supposed to; with hamachi (yellowtail), kohada (gizzard shad), seared isaki (striped pigfish), uni (sea urchin), botan ebi (Botan shrimp), akami (regular tuna) and what looked like chuu-toro (medium fatty tuna) but tasted like fine o-toro (fatty tuna) in the mix.


When he served me the sashimi, Michael informed that all the seafood served came from Japan, and that he wished the fish were fattier than is normally the case this time of the year.  In retrospect, I wonder if he was effectively apologizing (or just plain letting me know in advance) that the sashimi would not be as delicious tasting as it was good looking -- because, if truth be told, that's what I found to be the case (with the notable exception of the pieces of toro).

Don't get me wrong: my sashimi lunch at Sushi Tsubomi wasn't at all bad.  But I also didn't experience any moments of ecstacy, even while eating the uni and, yes, the toro too.  And yes, the raw seafood did indeed taste fresh -- but, in this case, it may have all been too fresh; since true master sushi chefs are known to age (some of) their offerings for a few days to get the particular taste and texture that they want.


These kind of thoughts get me wondering: have I passed into the realm of sushi snob?  And this also since, upon my seeing a few guests being ushered into what appeared to be the restaurant's private room, I got to wondering who would want to sit and eat there -- rather than directly in front of the sushi chef (and preferably the most senior one in the establishment)?!


It's strange: by the standards of many people, Sushi Tsubomi would be a high-end dining establishment.  With great views out of the 22nd floor restaurant's windows and an overall decor that seems to scream out that it's expensive, it's definitely not lacking bling.

For me though, there are tell-tale signs that it's not quite up there in the dining stakes.  For one thing, size matters -- but in the case of high-end sushi-ya, it's usually the case that small is better.  In addition, while the availability of a private room and a drinks menu whose sake/nihonshu section only consists of junmai daiginjo may impress some people, those elements indicate to me that this restaurant is not actually targetting true lovers of sushi and sashimi.  In short: Sushi Tsubomi may wow some people but it actually doesn't do it for me.
Posted by YTSL at 7:21 PM