From Pak Kung Au down to Mui Wo, where delectable dining options await! (Photo-essay)

The South Lantau Country Trail officially has its trailhead at a junction on Nam Shan -- which also is the point where the Lantau Trail's boring Stage 1 (which many hikers choose to skip) segues into the more interesting and challenging Stage 2 (which leads hikers up to and then down Sunset Peak) -- and ends down at the Tong Fuk Catchwater some 10.3 kilometers over to the west.  But although I've ventured along the section of this official Hong Kong hiking trail between Pak Kung Au and Nam Shan several times, I've only been once on the section of this trail to the west of Pak Kung Au (during which I ended up tramping all the way down to Pui O) and, actually, have never hiked the whole trail in one go.

Another preference of mine with regards to the South Lantau Country Trail is to opt to go in the reverse direction from how one is officially supposed to do.  One reason for this is that this means that I'm going downhill rather than uphill for much of the hike.  More importantly though is that going in this alternative direction means that I (and my hiking friend(s), for this is one of those trails that I would very much prefer not to go on alone -- and definitely not when the hill streams are on the full side) will end up in Mui Wo, where a number of really good dining options (including Wah Kee, the China Beach Club and Bahce Turkish Restaurant) are to be found! ;b 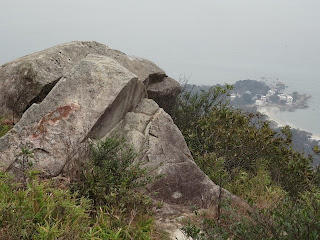 On a gray day, the large rock lodged along the trail looks to be
brooding and contemplating whether to roll down to the water's edge! 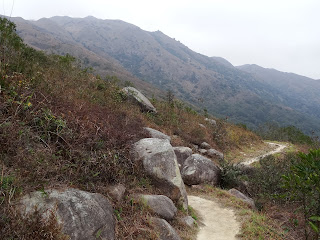 The kind of scenery few people expect to come across
in Hong Kong, and which always gets me thinking of Scotland! 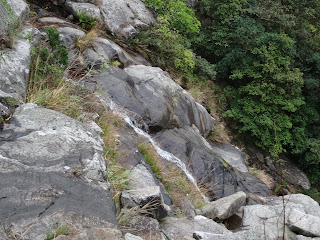 Along with the Lung Mun Country Trail, this official hiking route
may well pass by the most hill streams I know 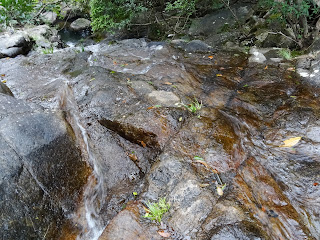 And yes, when the water is on the full side, one needs to be
careful when going over or around them -- as slipping
and falling off a mountain becomes a distinct possibility! 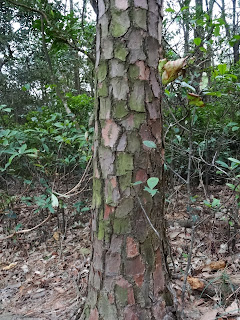 It's not just me who reckons this tree's bark
looks like it's been painted on, right? ;b 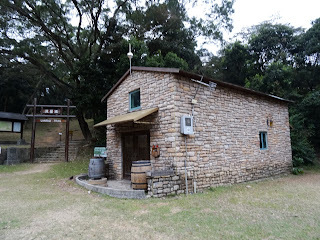 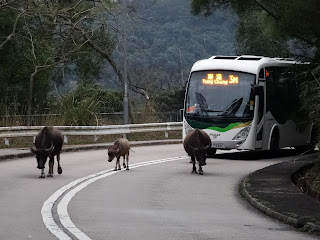 In Lantau, feral cows often act like they own the roads
(buses and other vehicles, be damned!)! ;D 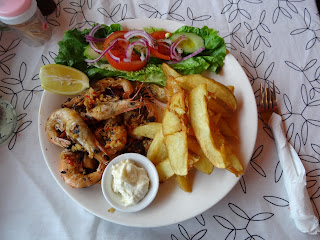 The kind of food that can be found in Mui Wo, and which
I will happily -- and can completely -- devour post-hike! ;b
Posted by YTSL at 10:09 PM

That is exactly why I always skip the first section and go up through Dai Dei Tong\Luk Dei Tong and then the Nam Shan Ancient Trail instead. just don't want to walk along the sidewalk or the narrow drainage of the South Lantau highway.

You're good. Some people would just take the bus to or from the Nam Shan trailhead! ;b

Looks like a great hike. Your top photo is truly a rock formation to remember! And it does have a "brooding," contemplative look. This confirms my belief that nature and anthropomorphism are closely linked with human perception. And the food in your photo does look good.

It's a lovely trail; one that I've hiked several times now -- and I think you can see why I consider this worth doing. Also, isn't it lovely to be able to have a good meal after a good hike? I must admit that I sometimes plan for hikes to end in Mui Wo, Yuen Long or Tai Po (all places with lots of good dining options) expressly because I've been pining to eat there again... ;)

Wonderful rock photos. What kind of tree is that? I've never seen bark like that....painted or not.

Glad you like the rock shots! Re the tree ID: since coming to Hong Kong, I have bought books to help me ID flowers, butterflies and other bugs -- but not (yet) trees! ;(