Belated appreciation for Our Time Will Come (film review) 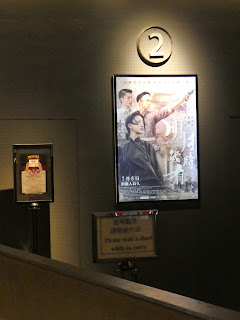 Our Time Will Come's poster brings to mind
that of old school propaganda movies :(

Awarded a world premiere at the Shanghai International Film Festival (where it was originally slated to be the fest opener, only to be bumped from that prestige slot by another, more bombastic World War II drama) and lumbered with a publicity poster in Hong Kong that recalled those of Communist Chinese propaganda movies, Ann Hui's Our Time Will Come under-performed at the box office of the filmmaker's home city earlier this year.

Having turned down an invitation to a preview screening, I was planning to give this cinematic offering -- whose local release was timed for within a week of the 20th anniversary of Hong Kong's return to the (glorious -- not!) Motherland -- a miss.  And I definitely would have done so if I hadn't heard good word of mouth about it from a couple of trusted sources who hastened to assure me that this offering actually possesses the effective understatedness found in Ann Hui's The Way We Are and A Simple Life (rather than the melodrama and sudden shifts in emotions that characterized some of her past period films).

Set in Japanese-occupied Hong Kong, Our Time Will Come revolves around folks who would have led ordinary lives in peacetime but chose to do their bit for their people in wartime, even after the British surrendered control of the territory to the Japanese on December 25th, 1941.  Mainland Chinese superstar actress Zhou Xun plays Lan, a literature-loving teacher without a job after her school ceased operations in those troubled times.  Living in town with her mother, Mrs Fong (Deanie Ip), and a couple of refugee lodgers from the Mainland, she gets recruited by charismatic guerilla leader "Blackie" Lau (Eddie Peng) for what's referred to in the film's English subtitles as the Dongjiang guerilla unit and written up as the East River Column in Chan Sui Jeung's book on these resistance fighters.

Initially tasked with doing such as helping print and distribute information pamphlets in the dark of night, the physically diminuitive Fong Lan soon rises to head the guerillas' Urban Detachment.  Although the notion of a female a senior field position in the resistance can come across as like an "only in a movie" development, it actually was a historical fact.  And it does indeed add so much more power to what is shown happening in the film when it's realized -- as I did post reading Chan Sui Jeung's East River Column: Hong Kong Guerrilas in the Second World War and After book, something I was inspired to do post viewing Our Time Will Come -- that the people portrayed in the movie by the likes of Zhou Xun and Eddie Peng really did exist in real life.

Ann Hui's admirable attempt to shine a light on a (still) little known part of Hong Kong history is one that acknowledges the contributions and sacrifice of such as the villagers who sheltered the resistance fighters, the pharmacist who tended to the wounded, and the civilians (young and old, female and male) who acted as couriers delivering messages as well as supplies and other material necessities rather than just those who engaged in armed combat.  In addition, there are the double agents; with Fong Lan's fiancé, Kam Wing (Wallace Huo), playing a particularly dangerous game by spending large amounts of time in the company of the Japanese, notably military commander Yamaguchi (Nagase Masatochi), in order to come by important information for the resistance.

Rather than spend a good portion on the film's budget on explosive action scenes, Ann Hui appears to have prioritized Our Time Will Come having a large cast filled with faces familiar to fans of Hong Kong cinema.  In return, the likes of Ivana Wong (who I actually found well nigh impossible in her super unglamorous part!), Sam Lee, Nina Paw Hee Ching, Stanley Fong, Kingdom Yuen King Tan and Babyjohn Choi do much more than one might expect -- given the small size of many of their parts -- with the roles they are given and, in so doing, add color and life to the proceedings.  And, almost needless to say, the film's lead actresses and actors do commendable jobs (even while being at times distractingly dubbed in the Cantonese version of the movie).

About the only significant mis-step made by the director appears to be the decision to have present-day scenes bookend the film, and are compounded by having an all too recognizable -- and too, well, un-ordinary -- Tony Leung Kar Fai playing an elderly man who had taken part in the war effort as a young boy.  To be sure, I can see the idea behind them being to show connections existing between what took place during the Second World War and the present day.  However, those scenes in which he is being interviewed (with the behind-the-camera interviewer played by Ann Hui herself) had the effect of taking viewers out of the movie; not least because they were inexplicably shot in black and white, unlike the rest of the film.