On the third anniversary of the start of the Umbrella Movement 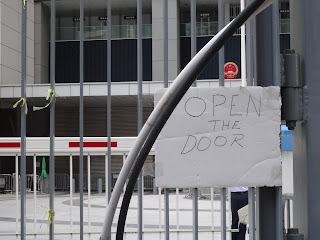 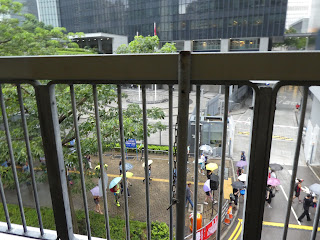 Still not open to the public in 2017
Three years ago today, the Hong Kong police fired 87 cannisters of tear gas into a crowd of peaceful protesters assembled at Admiralty and effectively triggered the start of the Umbrella Movement.  Two days previously, the then-18-year-old Joshua Wong and a number of other pro-democracy activists had scaled the fence that had been erected around a previously open space in front of the East Wing of Hong Kong's Central Government Office Complex to try to reclaim that which had previously been open to the public and, for their troubles, been put under arrest.
Pretty much every time I pass by -- and look through the still existing fence at -- Civic Square, I get to thinking how small that space is relative to the amount of space that consequently was "Occupied" by protesters for 79 days in the latter part of 2014.  I also get to reckoning that if that open space had remained open to the public in September 2014 (the way it had been originally set up to be), quite a bit of trouble could have been averted.
Put another way: I honestly believe that much of the anger and negativity that many of the Hong Kongers who ended up taking part in the Occupy (Hong Kong) protests -- that spread beyond Central and Admiralty to Causeway Bay and over Victoria Harbour to the Kowloon Peninsula -- felt with regards to the territory's government and police were the result of their overly strenuous efforts to clamp down on what actually had been non-violent acts of civil disobedience.  Three years on, you'd think that Hong Kong's powers-that-be and their overlords in Beijing would have realized by now that the more they try to push Hong Kongers to not act, the more they'll (re-)act.  But, alas, that's not the case.
What may be an even greater tragedy is that a not insignificant number of individuals who didn't dare -- as opposed to just didn't want -- to venture into the Occupy areas to see and hear things for themselves have never realized that the very best of Hong Kong was out there.  To this day, I feel that the Umbrella Movement taught and showed me that there's a tremendous lot of good in Hong Kong; which is why I actually remain hopeful that "Hong Kong, the freest part on Chinese soil with the strongest faith in democracy, can still make a difference", and convinced that there's a lot of life and fight still left in those who may currently feel down but most certainly should not yet be considered out for the count.
Posted by YTSL at 11:28 PM

Peacefull protester and they toss gas...Unfair...Coffee is on