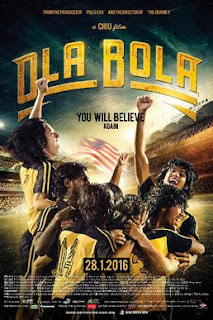 From Malaysia with love :)
Ola Bola (Malaysia, 2016)
- Chiu Keng Guan, director
- Starring: J.C. Chee, Saran Kumar, Bront Palarae, Luqman Hafiz, Eric Teng, Marianne Tan
After Yasmin Ahmad passed away in July 2009, at the age of just 51 years, and while in the prime of her filmmaking career, I expected her friend, Ho Yuhang (who had served as the assistant director for her debut-making Rabun (aka My Failing Eyesight) and guest starred in that film and Mukhsin), to take up her mantle: not in terms of producing quality Malaysian movies but also films that felt truly Malaysian.  While he has done the former, there's a better case -- with bi-cultural romance The Journey (2014) and now the multi-cultural, multi-lingual Ola Bola -- to be made for Chiu Keng Guan being Yasmin's true spiritual successor.
A nostalgic sports movie inspired by the 1980 Malaysian national football team, its main characters are not named Soh Chin Aun, R. Aramugam, James Wong, etcetera -- but they share enough identifying traits with those Malaysian sports legends to enable those of us who are familiar with these footballing personalities to easily figure out who's modelled after whom.  Largely set in an era when the Malaysian national team were able to beat the likes of South Korea (in competitive matches!) and Arsenal (albeit in just a friendly game but, frankly, unthinkable these days), it's bookended by contemporary scenes featuring young but ambitious TV journalist (Marianne Tan) getting tasked by her boss to do a story about a team of unlikely heroes seeking Olympic glory.
Beautifully lensed (by Chin Tin Chang) and well edited (by Gwyneth Lee), Ola Bola's footballing scenes -- particular those pertaining to the climactic football match -- are the absolute highlights of this pretty entertaining show.  At the same time, it's clear right from the start that director Chiu Keng Guan had greater ambitions for his film, which possesses strong pedagogic and serious dramatic elements along with ample sporting action and comedic hijinks.
"You will believe again" was the campaign tagline for the movie.  Even if unspoken, it's pretty obvious that there's an advancing of the idea that "unity is strength" (bersekutu bertambah mutu, as per Malaysia's national motto) -- for the country, on the football pitch and also in life.  And in retrospect, it's amazing that there could be formed a band of brothers -- supported and cheered on by female and male family members -- whose representatives included members of the country's three largest ethnic groups and from states in both East as well as West Malaysia.

Tan Pik Yee and Chan Yoke Yeng's script can be clunky at times but even while my head was shaking over how overly melo-dramatic and tugging at the patriotic heartstrings some sections of it was, I found my heart threatening to burst and my eyes welling up with tears.  The stories of the likes of  hot-headed captain in Chow Kwok Keung (J.C. Chee) -- so dedicated to his national team (and his dream) that he turned down a move to play for a professional club in England -- and goalkeeper Muthu Kumar (Saran Kumar) -- who clashes heads with his father when he effectively prioritizes football and country over livelihood and family -- can sometimes seem exaggerated, and yet they feel like they contain enough truth to resonate.
Also, in view of it being an impossible "ask" to provide three-dimensional portraits of all of the members of the team, it's truly to the filmmakers' credit that one comes away with distinct impressions of a number of the players: including Eric from Sabah (Eric Teng), the talented -- but also hard-working -- Ali (Luqman Hafidz) and even seemingly perennial benchwarmer Chai (Lim Jiang Wen).  And on an aesthetic note: his Sanjeet Singh character may not have had all that many lines but Haris Zainuddin definitely left an impression by way of his good looks!
In addition, while radio commentator Rahman (Bront Palarae) appears for much of Ola Bola to have been included into the film mainly for comic relief, I do love how there's a narrative payoff involving him.  Similarly, I appreciated the emotional connection made between fact and fiction by way of a cool cameo near the end of this movie which actually would be a good choice to view this Malaysia Day and other Malaysia Days to come. :)
My rating for the film: 7.5
Posted by YTSL at 6:48 PM

Just stumbled on this as I was looking for a background piece on the film...will be showing the trailer in class tomorrow. Thanks!!!!

Haha, and hope the review proved useful. Please let me know your students' reaction to the trailer!