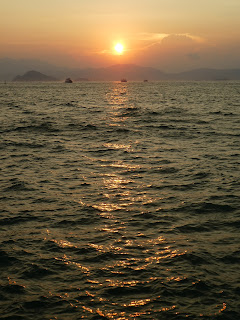 Waiting for the sun to set
at Kennedy Town's "Instagram Pier" 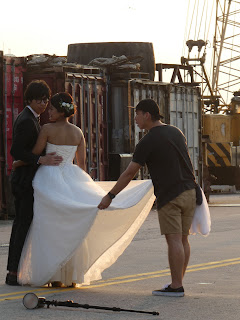 Also fun to watch were the antics of a couple
there to take wedding photos and their photographer! 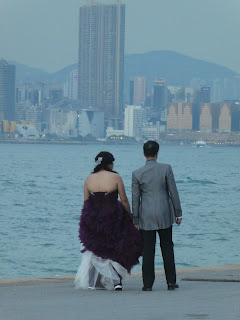 Another romantic couple spotted at Instagram Pier!
Earlier this evening, a friend and I went on a stroll to -- and to take sunset photos at -- Kennedy Town's Western District Public Cargo Working Area (aka Instagram Pier).  Also there were the usual suspects: joggers, people out walking their dog (as featured in Pang Ho Cheung's Love Off the Cuff), fishing enthusiasts, fellow shutterbugs, and pairs of lovebirds.
On previous visits to this open space which is photogenic and also tends to be on the breezy side (something that's really welcoming on summer evenings), I had seen hobbyists with their drones and also at least one person with a remote-controlled toy fire engine that came complete with flashing lights and a siren that sounded amazingly like those of actual fire trucks.  This time around, none of those folks were around but attracted similar attention and amusement were a couple obviously there to take wedding photos and another couple that probably were doing the same thing despite the female of the pair being dressed in a reddish purple get-up rather than the conventional bridal white.
Considering that I've seen bridal couples in far more remote parts of Hong Kong (including Cape d'Aguilar, Pak Tam Chung, the High Island section of the Hong Kong Geopark and Nam Sang Wai), I guess it shouldn't be all that surprising to find that Instagram Pier also is favored by some bridal couples (and/or their photographers) -- and particularly around sunset, when this waterfront area is probably at its most visually attractive.
To be sure though, the popularity of this spot -- which has become more accessible than before since the extension of the MTR's Island Line to Kennedy Town in December 2014 -- means that the duos concerned have to do the posing in full view of scores of people.  Still, if this hasn't stopped people doing such as getting wet from the surf over at Shek O Beach while dressed in their wedding outfits, to ensure that they get memorable photos for their wedding album (and videos or slideshows?), this definitely isn't going to stop others from striking ultra-romantic poses in front of gawking others at this pretty harborfront locale! ;b
Posted by YTSL at 10:54 PM