Boys with their remote-controlled toys in Hong Kong 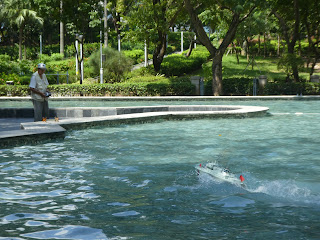 A man having fun with his remote-controlled toy boat 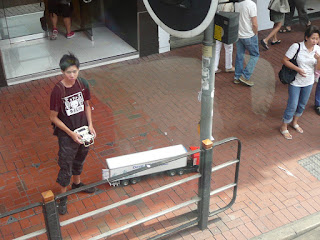 Spotted from a bus: a youth waiting to cross the road
with his remote-controlled truck ;b 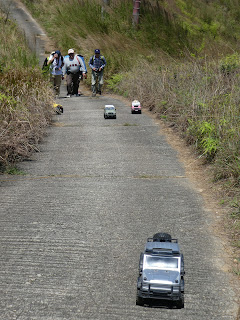 Still more "boys" with their toys -- this time
ascending a hill out in the countryside! :)

As I was walking by Victoria Park's Model Boat Pool a few weeks ago, I got to wondering whether, in this era where hobby drones look to have become the remote-controlled toys of choice, that particular park facility -- which, at 954 square meters in size, is several times larger than the average Hong Kong apartment -- was still actually being utilized.  So of course the next time I passed by there, I discovered not just one fellow but two guys (who probably are some 40 years apart in age, and didn't act like they knew each other) remotely manoeuvering their model boats at considerable speed through the waters of that model boat pool!

Probably because of the considerable noise those model boats made as they roared around, the toys and their owners had attracted quite a crowd of onlookers.  And while it can seem on the strange side for people to be so transfixed by this, I must admit to finding it all quite hypnotic myself too after I stopped to survey the scene and got to fixating on watching the boats racing round and round the pool!

In contrast, whenever I've come across people with remote-controlled cars and trucks, it tends to be the hobbyists who attract me more than their toys.  Sometimes content to be on their own, there also are others among them who prefer to meet up and indulge in their passions with like-minded folks: who range in age from young fellows who look like they're still in secondary school all the way to white-haired retiree-types; but who, without exception thus far, have uniformly been of the male persuasion!
Posted by YTSL at 10:41 PM

It used to be a circular pool decades ago, before the VP got its face lift. The current version of the pool had been partitioned. a bigger section for speed boats, gas fueled or electrical alike. A much smaller portion was reserved to slow boats. I have seen someone running a remote control model sail boat quite a few years back.

There had always been a speed boat gang out there.

Fun entry. A couple of years ago I stopped at a small local Lakeside Park to take photos. Three men were flying and landing remote-controlled pontoon airplanes on the lake. It was fun to watch...and when I looked in my bag for my camera I realized I'd left it home...Usually these guys "fly" at another lake during the week when I'm at work.

Yup, I did notice the partition -- and was thinking how the smaller space made it so that greater control was needed to make sure that the boats speeding about didn't crash into the sides of the pond! ;)

I hope you've since managed to get photos of those men and their remote-controlled pontoon airplanes! :)