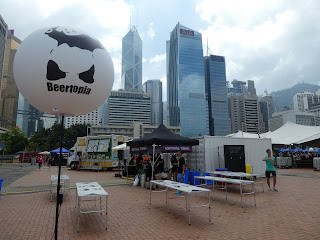 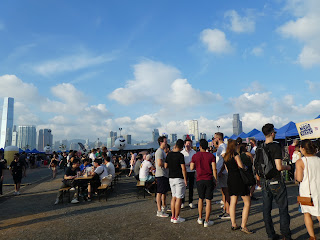 A good time was had there by lots of people! 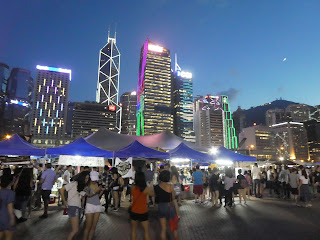 And yes, I was still there after the sun went down
and moon appeared in the sky! ;)


After missing out on Asia's biggest craft beer festival last year (because I was out of town when it took place), I made sure to find out when Beertopia would be taking place this year.  And as far back as July, I had secured an early bird ticket for the second day of this year's edition -- which I proceeded to put to good use yesterday.


In statistical terms: I was at the beer fest from around 12.30pm to 7.30pm, during which I tried 10 different beers (more if you count the sample sips I took from friends' cups!) from eight different breweries and 1 elderflower cider.  Also, thanks in parts to a friend who likes beer but has a really low alcohol tolerance level, I came by extra drinks coupons that I ended up using on two bottles of beer I opted to take home along with a complimentary can of a Weisse beer from Lithuania (rather than drain them all over at the festival ground)!


This year's fest featured over 500 beers from 96 different breweries.  Even so, I got the feeling that the 2017 edition was smaller in size than 2014 and 2015's.  And I think it says something that, whereas in previous years, I "discovered" great beers that I hadn't previously known about, the beers I liked the most this time around were old favorites that I've had before.

Something else that was quite apparent to me was that this year's Beertopia had a different atmosphere from the ones I previously attended.  In particular, I felt that whereas the 2014 edition had been beer geek heaven, thanks in large part to a number of the brewers (including personal favorites over at Kagua and Boxing Cat) being present, and eminently available to talk to and even hang out with for a time, while this one was attended by people primarily out there to have a good time.


Not that there's anything necessarily wrong with that, of course.  But it speaks to a different emphasis (which includes providing space for smoking shisha) and a different type of crowd from previously, to my mind (as can be seen in there being a lot more people smoking cigarettes at the (outdoor) venue than I can recall for previous years and my smelling the whiff of marijuana about the place too).


On the beer front: there was a lot more Hong Kong brewed products about the place too.  In theory, this should be a good thing -- as one would expect local microbrews to be fresher than those shipped from elsewhere, often across oceans and from thousands of miles away.  Unfortunately, I still haven't found a Hong Kong brewed beer that I truly love the way I do, say, California's North Coast Old Rasputin Imperial Stout, New Jersey's Flying Fish XPA, and Japan's Minoh Beer's W-IPA and stout.

Still, I have continued trying out Hong Kong brewed beers at such as Beertopia.  And this time around, the beers from local breweries (albeit ones that have partnered with foreign ones) that I tried were from HK Yau (brewed in Hong Kong with input from Brooklyn Brewery and Carlsberg!), Heroes Beer, and Japanese Hitachino Nest Beer's Fotan brewery.

At the end of the day though, my favorite of the beers that I tried at this year's Beertopia -- all of them on draft, I'm happy to say! -- was Brooklyn Brewery's East IPA.  It may have travelled thousands of miles to get over here but its taste didn't seem to have been negatively affected from having done so.  (By the way, this opinion is from someone who has drank brews from this brewery over in the Big Apple as well as over here in Hong Kong! :b)
Posted by YTSL at 2:28 PM

Strange enough. I found Old Rasputin in 330 ml bottles in GREAT in Admiralty. But Mr Lee's shop is selling them at $45, a bit pricy. Unfortunately the liquor store that used to be on Central Street no longer carry it after moving to QRW.

Guess I have have to grab half a dozen of them when I go to Sai Kung. Meanwhile I will opt for 'Sevens' from HK bear for just $25.- a bottle (http://www.hkbeerco.com/#beers). I would certainly like a draft if I could get hold of it.

It's not Old Rasputin. But it's value for money and the best stout in town for the price range. Even this one beats the Irish ones.

And someone had raised the price tag of Chimay Blue........

I usually get my bottles of Old Rasputin at Brewcraft, 4/F, 15 Cochrane Street. Once upon a time, this imperial stout used to be a seasonal affair -- and I still prefer to drink them in cool rather than hot temperatures.

I'm also partial to Norway's Nøgne Ø imperial stout, which I've drank on tap as well as from bottles here in Hong Kong.

As for price increases: all the beers I like seem to have had price increases recently, including the Kagua blanc -- which is why I am more likely these days to get the Far Yeast Tokyo Blonde that's by the same brewer but under a different company name.