Thoughts on biking in Hong Kong 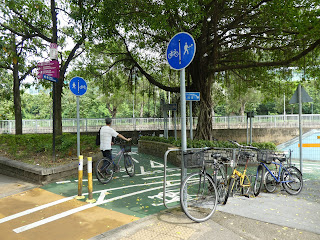 Bicycles (and bike paths) abound in parts of the New Territories 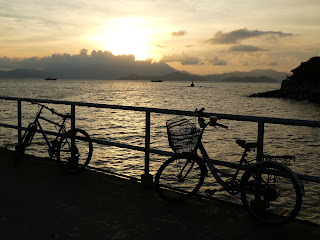 Ditto on a number of the Outlying Islands
On my most recent trip back to Penang this past July, I met up with a childhood friend with whom I had spent many happy times.  At one point, we got to regaling her son with stories of how we liked to bike up a nearby hill; or, rather, gritted our teeth and rode up the hill in order that we could ride down it as fast as we could!
As an adult, however, the thought of riding up steep hills seems too much of a challenge -- or, at least, bother.  Which is probably why it was years before I decided to take my first ever bicycle ride in Hong Kong.  In all honesty though, I've enjoyed myself tremendously each time I've gone biking in the Big Lychee; even on outings when the weather has been less than perfect and I ended up getting rained on.  And despite Hong Kong having more than its fair share of hills, the (officially designated) bike paths I've been on (all of which are in the New Territories) have actually all been on the flat side as well as paved.
Of course if I wanted to go bicycling on more hilly terrain, there are a number of places that I can do so, including in some of Hong Kong's country parks.  If truth be told though, I reckon some of those  trails designated for mountain bike riding are on the dangerous -- if not downright insane -- side.  I think here of the mountain bike paths along the Dragon's Back and Chi Ma Wan Peninsula: both of which I think are far more suitable for hiking than biking, especially since there are sections where if you veer off to the side, it will result in a pretty sheer drop down a high hill -- and, in the case of the latter, possibly down into the sea too!
Instead, should I stretch my Hong Kong cycling boundaries, it'll more likely be in such as the car-less -- and, perhaps not coincidentally, bicycle aplenty -- islands such as Cheung Chau, Peng Chau and Lamma.  Mind you, should I do so, I intend to stick to the less hilly sections of the island -- unlike a Mainland Chinese tourist that the beach clean-up team I was with that day were shocked as well as surprised to see attempt to haul one of those tuk tuk-type contraptions up a pretty steep, even if not super high, hill -- only to abandon his attempt part way (but still a far longer way up already than we expected to encounter such a vehicle)! ;b
Posted by YTSL at 10:57 PM

I don't believe there any bike trails in my area...But what I notice there quite a few adult using bikes as transportion.
Coffee is on

There are restrictions on bicycles and Tricycles in Cheung Chau. On certain streets and alleys, wheels are banned on holidays. But that did not stop paddlers anyway, both locals and tourists alike.

It would be fool hardy to try and paddle one of those heavyset tricycles up any slopes unless they are equipped with proper gears. I have not seen any of these anywhere yet though. Even if you are able to push or peddle these up, with the extra mass of the chassis, I doubt if their breaks could handle the down hill rush.

The bike trails that I've been on appear to be largely used by leisure riders but I've also seen a few people transporting stuff on bicycles along them.

I haven't noticed signs restricting bicycle and tricycle use on certain Cheung Chau streets and alleys. But I also would have thought that most people would enough common sense to figure out which paths and byways would not be bicycle and tricycle friendly. Then you come across people like that Mainland Chinese tourist who had far more brute strength than sense... ;D

I don't remember seeing signs or notice about bicycle\tricycle ban in Cheung Chau either, but I remember it was in the news sometime ago for various incidents that:

1. Riders were stopped by Police, being asked to disembark, saying no paddling on pedestrian sidewalks; (Strange enough, there are no clear definition of bicycle lanes in Cheung Chau, and no motor road either. Technically and practically speaking, no pedestrian sidewalks)
2. Police stopped riders on Tricycles, saying regulations dictates no passengers are allowed;
3. Police cracking down on illegal add-on\strap-on seats for kids on bicycles;

Probably we have some outdated regulations.

Hmmm... I wonder whether this clamp down has coincided with drastic increases in visitor numbers (and idiot visitors) to Cheung Chau on weekends or public holidays. I haven't been to the island in months. When I last did (usually on Saturdays or weekdays rather than Sundays), things weren't too bad. I hope that's still the case. Cheung Chau can be such a lovely place... :S

I remember seeing a guy in the Kwun Tong area building his own unconventional bicycles or tricycles but got stopped by the Police multiple times, confiscated his bikes and arrested him for driving an unlicensed electrical vehicle and without proper insurance.

Don't know how the case end up though. You can see the photos of all his previous bikes in the Apple Daily URL.

There are indeed times when I reckon the police here in Hong Kong are inclined to be overly strict about things. On the other hand, I often see cyclists riding in the tram lanes, sometimes rather recklessly, and -- my particular bug bear -- (professional) panhandlers around town and wonder how they seem to be able to blithely do things which I think it's safe to assume are illegal in Hong Kong.

I remember the local tram lanes are opened for bicycles, but there is a risk of stuffing the wheels into the track, which may break the wheel and creates a severe fall. I've seen famous TV personalities falling while racing (https://www.youtube.com/watch?v=OA1GXP1uOuQ).

I'm pretty sure you have seen cargo bicycles for LPG\Kerosene containers in the past. But decades ago those grandfather grocery stores used to have a few of these delivering goods like rice, oil, and other local groceries. In rural area, I've seen chicken and pig delivery on fortified bicycles.

Those days are basically gone now.

Yes, I regularly see the people delivering the LPG/kerosene containers by bicycle -- and admire their strength and balancing abilities. And while there aren't grocery and animal deliveries on bicycles any more, there still are those cha chaan teng delivery fellows -- and I have to admit that often, when I see them, I'm reminded of Leon Lai in "Comrades, Almost a Love Story"... ;b