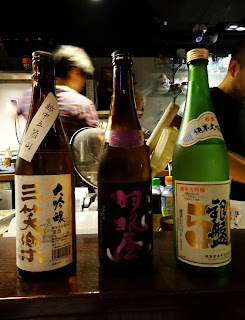 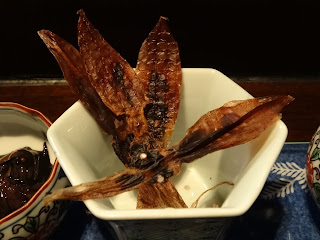 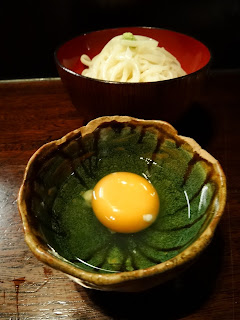 A raw egg went very well with the Himi udon
that's a speciality of Toyama prefecture! ;b

At Sake Bar Ginn's this evening, I got to taste five different sake and six different food dishes from Toyama.  Like at this past March's Tokushima Night, the food and drink on offer are regional specialities which one doesn't often see at the venue along with other Japanese dining and drinking establishments in Hong Kong.  So it really did feel like a special treat to get to try them tonight.

Although Toyama actually has mountainous inland areas, seafood dominated its culinary offerings right from the start, with the first dish I was served being while hotaru (firefly) squid served three ways!  Squid also figured in two other dishes on offer this evening: an oden-like offering which also included balls of potatos and taro (yam), mushrooms and slices of carrots; and the Takaoka-style black croquette with a center made up of rice, onions and potatos cooked in squid ink and consequently very black looking!

Two other seafood dishes included in the mix were a tororo kombu (seaweed) rice ball, and a yellowtail miso soup.  (And for those who wondered: yes, I did type "tororo" as Totoro the first time! ;b) So it may be rather ironic that my favorite dish on the special Toyama Night menu was the sole one that wasn't a seafood dish!  And while the Himi udon may not look like anything special, let me emphasize how wonderful this chewy wheat noodle's texture was -- and how much of a treat it was to feel safe to eat the rich-tasting Toyama egg -- with its big and bright yellow yolk -- that came with it raw! ;b
Posted by YTSL at 11:58 PM