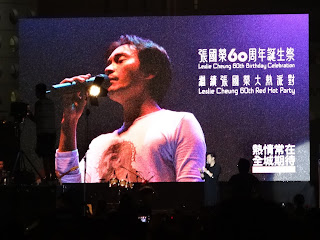 If he were still alive, Leslie Cheung would have been
60 years old today... 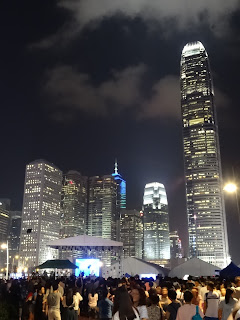 In any event, a large crowd gathered this evening
in Central to celebrate his birthday 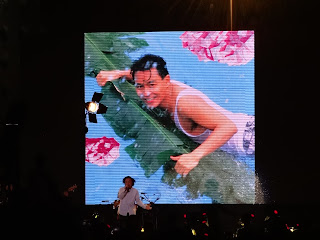 ...and contemporary Cantopop luminaries like Eason Chan were there
to pay tribute to Leslie and entertain the assembled crowd


Many years ago, when I was still living in the US, I attended my first ever Canto-pop concert.  An American friend who's a regular Canto-pop concert goer managed to snag front row tickets for himself, his wife and three others (including myself) for a midnight concert in Atlantic City.  And off we went late one night to go listen to, and see, Leslie Cheung -- the star of some of my very favorite movies (including He's a Woman, She's a Man and Ashes of Time) perform live!


Despite the late hour, Leslie delivered, and thrilled one of my friends so much that he screamed out "I love you, Leslie!" without realizing he had done so until we told him so after the concert.  And while I didn't get as crazed as him, I still very much enjoyed the concert and have it down as one of those events and experiences I was a part of that I reckon I'll never forget.


This evening, memories of that Atlantic City concert came flooding back as I stood out in the open air at the waterfront between Admiralty and Central, not far from the People's Liberation Army's Hong Kong headquarters over at the Tamar site and where Occupy Admiralty had taken place.  For as it so happened, what would have been Leslie Cheung's 60th birthday -- if he had not leapt from the Mandarin Oriental Hotel building that also happens to be located close by on April 1st, 2003 -- was being commemorated with a major bash organized by Leslie fan group Red Mission in the form of a "concert" that featured video footage of Leslie in concert along with clips from a number of his movies and guest performances by dancers and singers, including Eason Chan, one of the few contemporary Canto-pop singers to come close to Leslie in singing quality, if not charisma.


Arriving in the area a few minutes after the event's start, I was surprised to see so many other attendees -- and so, it appears, were the organizers and security guards at the scene as they had prematurely closed up the area where event attendees were supposed to be allowed into, resulting in the crowd spilling onto the surrounding grassy area and paved paths.  The views were often not optimal from there, and ditto the sound -- but no matter: hundreds, if not thousands, of us stayed and enjoyed the two hour concert in those areas irregardless.

Initially disappointed, I had planned on snapping a few photos and then leaving.  But upon hearing Leslie's haunting voice, I ended up staying put until the concert's end; feeling amply rewarded by hearing some of my favorite songs by him, including He's a Woman, She's a Man's Chase (which featured not once but twice this evening), the theme song from Days of Being Wild, and the equivalent from A Better Tomorrow.

And should there be any doubt: yes, my emotions did end up getting the better of me; and I found myself tearing up and missing Leslie (even though I never did have the privilege of knowing him personally) even while also feeling so very grateful to him for having left the rich musical and cinematic legacy that he managed to do before he departed from this very Earth more than 13 years ago now.
Posted by YTSL at 11:59 PM

Wish i could have been there.

Thanks, and glad to read on your blog that you were at the concert (for a bit) too! :)

If it's any consolation, I thought of you -- and how you'd have enjoyed it -- while I was at the concert last night... ;)