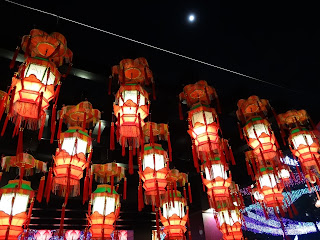 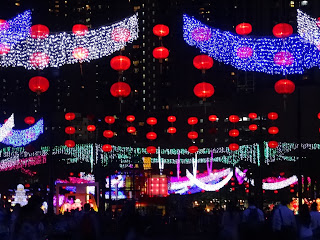 This time of the year, Victoria Park is pretty colorful at night 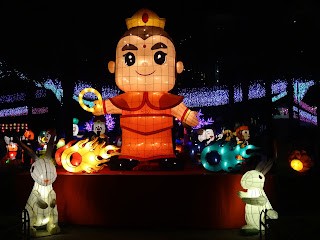 Na Cha the Great, flanked by a pair of moon rabbits! :)
In the next day or so, Super Typhoon Meranti -- the biggest cyclone of 2016 -- is expected to pass close enough to Hong Kong to unleash some storms in the vicinity.  Although it's not forecast to batter "Asia's World City" with as much force and intensity as it has unleashed on the Philippines and Taiwan, its presence in the area -- in particular, the downpours that it will be bringing along -- looks like it may ruin many people's Mid Autumn Festival celebrations.
So rather than let a super typhoon rain on my parade (or the fact that it's still pretty warm despite autumn supposedly already being here), I decided to go to Victoria Park this evening to check out the lantern displays that have already been erected there -- and also do some moon gazing -- even though the moon will only be full tomorrow night rather than tonight.  And as it so happens, many other folks looked to have had the same idea, since there were quite a number of people happily wandering and taking photos out in this same public park in Causeway Bay which is the venue for considerably more serious and less happy annual commemorations each June 4th for a number of years now.
Like at this year's Chinese New Year Flower Market which also was held in Victoria Park, there were a number of monkey-themed items on display this time around.  Among these were lanterns designed to look like a troop of way cuter monkeys than those I sometimes encounter when out hiking in Hong Kong, and another set of lanterns depicting the main characters from the Journey to the West classic tale of a Master Monk who travels to India -- along with three protector-disciples (one of whom is the Monkey King himself)-- to obtain sacred Buddhist texts.
Other Chinese deities represented at this year's lantern display in Victoria Park included the moon goddess Chang'e, and Tudigong and his wife.  I also was delighted to see a lantern shaped in the form of Nacha, a mischievous god figure who I got to know about as a child from watching my then favorite actor, 1970s Shaw Brothers superstar Alexander Fu Sheng, playing him in Na Cha the Great, around.
He may be a lesser Taoist deity but Na Cha (also known in Cantonese as Sam Tai Tze (trans. Third Prince)) actually has at least one temple in Sham Shui Po and one in Macau dedicated to him.  And although I have to confess to being unclear as to the particular relationship with him and the Mid Autumn Festival is, I have to say that I found it pretty cool to see Na Cha among the Chinese gods represented out there in Victoria Park tonight! :)
Posted by YTSL at 11:59 PM