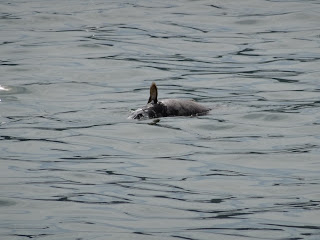 Not a sight one wants to see in the sea 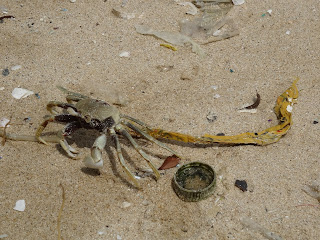 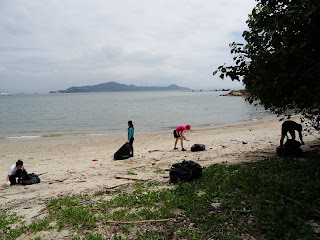 
The portends were not good early on for the beach clean-up I went on yesterday.  First, only half of the people who were signed up for the event the day before turned up at the meeting point in the morning.  Then, as we walked from the ferry pier at Chi Ma Wan to the nearby beach which the group has been cleaning on the last Saturday of each month for the past few months, I spotted a large, clearly dead fish floating in the nearby waters.  And, as has been the case each time I've gone on a beach cleanup, the seriously polluted sight that greeted our group as we got close to the beach was one capable of shocking and getting hearts sinking.

But upon setting foot onto the trash-strewn beach, my spirits were lifted by the sight of crabs scurrying about on the sand and butterflies and dragonflies deigning to flit about the place.  Put another way: this part of Hong Kong may have been disgustingly dirty but the resilience of nature made it so that there was plenty of life still left in it.


Even more heartening still was how much of a difference a band of just eight individuals were able to make in just a few hours.  And not only did the beach look a good deal cleaner when we decided to call it a day but this time around but we also had gone about undertaking the additional task of separating the collected trash into recyclable plastics, glass and metal vis a vis items which couldn't be recycled (which actually still consisted of a lot of plastic along with styrofoam, both of which fish and other creatures are liable to fatally ingest) this time around.

Something else that also gives me hope in humanity is that half of our group yesterday consisted of repeat volunteers who have been taking part in beach cleanups for more than a year now.  And while there are lots of people who join us to clean the beaches just once and then never return, I actually do remain optimistic that more folks (including a couple of members of yesterday's group) will feel inspired and/or duty-bound to join us again some time. :)
Posted by YTSL at 10:38 PM