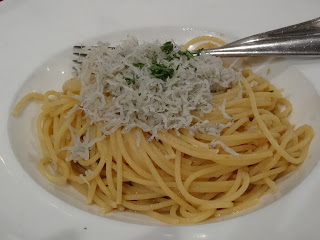 Spaghetti with whitebait in anchovy sauce
is fishy in a good way ;) 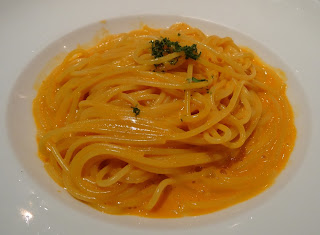 Spaghetti with creamy sea urchin sauce
is another unusual concoction I enjoy :)

Ever since I saw Hirokazu Kore-eda's sublime Our Little Sister, I've wanted to eat whitebait on toast like its principal characters are shown doing on more than one occasion.  Unfortunately, that particular foodie fantasy has yet to become a reality -- unlike my having achieved my dream of eating corn tempura that came about after watching the same Japanese filmmaker's Still Walking some years back.  Still, it's not like I've not gotten to eat whitebait sprinkled on other Japanese culinary concoctions (and yes, it's true enough that whenever I do so, I do get to thinking of my absolute favorite of the many films I viewed in 2015)!

Among the dishes containing copious amounts of whitebait that I've enjoyed in the past year or so has been the spaghetti with whitebait in anchovy sauce that's on the menu at Sagrantino, a restaurant here in Hong Kong's Central district which serves Tokyo-style Italian food along with the kind of offerings (like pasta with carbonara, pizza margherita and tiramisu) that wouldn't look out of place in a "regular" Italian restaurant.  An American friend I ate there with earlier this week got a bit uneasy at the sight of the many pairs of tiny fish eyes starring out from the top of the dish that I was eating but that particular sight didn't ruffle me one bit and the umami-ness of this whitebait-rich concoction really did leave me feeling very satisfied!

At the same time though, I have to admit that this whitebait in anchovy sauce affair is only my second favorite dish at this restaurant dishing out its particular brand of yoshoku cuisine whose chef-owner, Takashi Yasuda, does hail from Tokyo but has also spend some years in Italy (and can speak Italian as well as Japanese and English); with my absolute favorite thing to order and eat at Sagrantino being the similarly umami-packed spaghetti with creamy sea urchin (i.e., uni) sauce that tastes so rich that you are liable to feel that you're being oh so very decadent when devouring it!

Another admission: whenever I've had this pasta offering, I've longed to literally lick the whole plate clean -- so much do I love that creamy sea urchin sauce.  However, I can imagine how that sight would shock and horrify the people around me when I did that, including my dining companion(s) on that occasion.  So I've managed to control myself each time... thus far! ;S
Posted by YTSL at 11:59 PM

never had sea urchin but I would be willing to try it.
Coffee is on

Here's the thing: when sea urchin is good and fresh, it tastes so very wonderfully of the sea but when it's bad, it tastes like iodine. So please make sure if you ever are offered to try it that you've got good sea urchin -- otherwise, you'd be put off eating it for life! ;S