The easy way by foot to Stanley (Photo-essay)

When people talk about hiking to Stanley, they tend to assume that it involves a climb up and over The Twins, a pair of Hong Kong Island hills that take more than 1,000 steps straight uphill to mount.  An easier but less well known option is to go along the Tsz Lo Lan Shan Path which hugs the western side of Violet Hill and the Twins, and follows a catchwater for much of the way.  And even easier and less well known still is a trail located far closer to the water and sea level that lies just off Island Road near the Hong Kong Country Club.

After getting off at a nearby bus stop, I went along an elevated walkway that's known as the Mills & Chung Path to Deep Water Bay Beach, then along the Seaview Promenade from there to Repulse Bay (both of which I first visited when attending the Sculpture on Hong Kong Sea 2009 event).  Then after spending time checking out the colorful Kwun Yam Shrine at Repulse Bay, I continued my trek initially along the side of a road before connecting to a shaded trail I hitherto hadn't realize existed, and which eventually took me to Stanley via Ma Hang Park.

Although this excursion is too urban for the most part as well as easy to really feel like a genuine hike, it still can be quite a workout on a hot summer's afternoon; with my pedometer showing that I had taken close to 18,000 steps after I got home that day.  Also, much to my surprise, I did actually get in some critter spotting along the way.  So I guess I did get close to nature to some extent after all on this outing! ;b 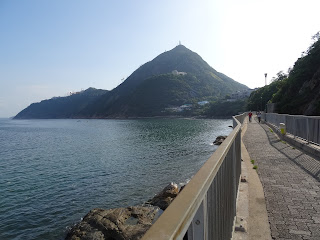 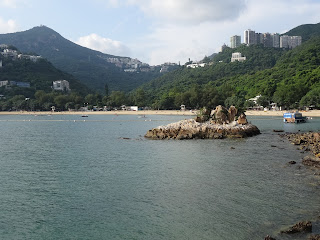 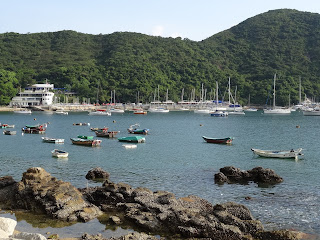 Looking out across the water to Middle Island, home to
clubhouses belonging to the Royal Hong Kong Yacht Club and
less prestigious -- but reputedly friendlier -- Aberdeen Boat Club 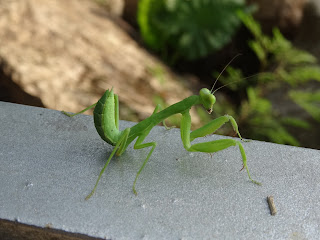 My praying mantis photographic subject stopped and
stared boldly at me and my camera! ;b 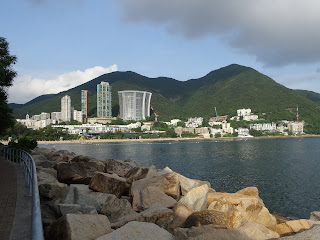 On the way to Repulse Bay, I caught sight of The Twins
and felt so good to be able to say I've been up those twin peaks! 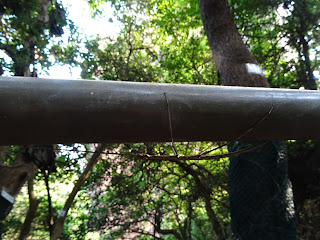 Can you spot the brown stick insect? 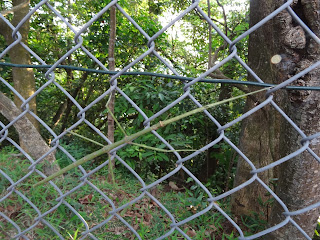 This considerably longer green stick insect
should be much easier to catch sight of! ;b 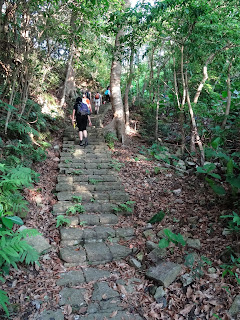 Yes, there were some stairs to go up --
but they were way fewer than if I had
gone to Stanley via The Twins! :)
Posted by YTSL at 11:21 PM

Ah, I see you finally did Mills & Chung Path to Stanley. Do you know there were reports of wild boar and python sightings in the past few years near Ma Hang Estate up the path you came down?

On the other hand, did you go to the park behind Kwun Yam Temple next to Ma Hang Estate? You could go to the pier through there.

Ug, how could I miss that? You did go through Ma Hang Park. Do you know there are also snake sighting there? Last time I was there there were multiple signs and notices saying 'before of snakes' along the paths.

Ma Hang park is a nice place for birds and butterfly watching during some months of the year.

I've actually been on the Mills & Chung Path before -- on a walk from Repulse Bay to Aberdeen. :)

Didn't know about the wild boar sightings near Ma Hang Estate but I've seen those "beware of snakes" signs in Ma Hang Park. Haven't spotted any snakes there myself though -- thank goodness. And yes, it is indeed a nice place for birds and butterfly spotting in the warmer months. :)

Our son had a praying mantis and I recall buying crickets for it.
Coffee is on