Two years on from the commencement of the Umbrella Movement 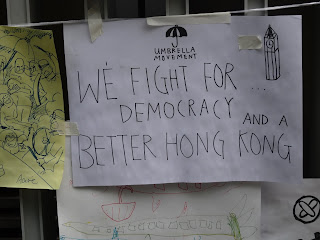 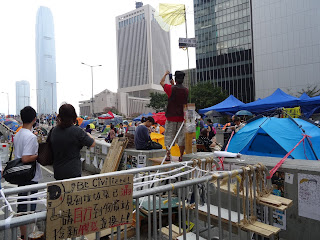 The Umbrella Movement = Hong Kong
as its most civil and civilized?


Two years ago today, I returned from a wonderful Japan trip (during which I did such as cycle across the wonderfully scenic and peaceful Kibi Plain on my birthday) to find Hong Kong in turmoil.  In the early afternoon, I had gone over to Admiralty to initially not do much more than meet up with a friend to collect something -- my beloved Hello Kitty plush which she had washed for me, actually! -- from her and have a late lunch together.


But as we made our way out of the mall where we had dined, we noticed that the nearby street seemed unusually empty of vehicular traffic.  Being the inquiring folks that we are, we decided to go over to find out what was going on -- and soon came across what looked like regular folks doing such as putting barricades on the streets as well as walking right in the middle of normally vehicle-filled roads.


While we went and tried out the experience of walking on thoroughfares that are normally reserved only for cars and similar vehicles for a bit, my feeling at the time was that we -- and the people around us -- were actually behaving in a pretty foolhardy fashion.  And even though I had done my share of protesting and demonstrating on such as June 4th and July 1st prior to what turned out to be the dawn of the Umbrella Movement, I actually was inclined to think that the particular pro-democracy protests that the likes of Benny Tai and Joshua Wong had called for didn't seem that well thought out and, consequently, worth supporting.


But later in the day, the police fired an unprecedented amount of tear gas into the crowd of demonstrators who had assembled at Admiralty as well as used pepper spray and baton charges on them. Rather than achieve their aim of scaring the demonstrators and dispersing the crowd, the uniformed force that used to be known as "Hong Kong's finest" -- but saw their reputation tarnished through a number of brutal acts over the course of the Umbrella Movement -- ended up actually making people more determined to stand up for their beliefs and actually got many other folks so furious and indignant by their use of what was commonly seen as a seriously unnecessary amount of force.


As I told my friend after learning about what had transpired at Admiralty in the late afternoon, I actually felt like I wanted to rush back there in the evening; so enraged did I feel as well as determined to do my bit to ensure that Hong Kong ground would not have the blood of protestors shed on it like it had happened at Beijing in the summer of 1989.  Because of such as work commitments, however, I actually didn't return to Admiralty until October 1st -- when a few friends and I went and visited, and walked along, "Occupied" spaces in Causeway Bay, Wan Chai, Central, Tsim Sha Tsui and Mongkok as well as Admiralty.


A few days later, I sat down on a road in Hong Kong for the first time ever.  Looking back, it seems almost ridiculous that I was so scared that I'd immediately be apprehended by the long arm of the law, attract negative attention, maybe even be spat at or physically assaulted by angry people against the Umbrella Movement and what it represented (and still represents).  Instead, I was largely left alone, with my thoughts and such -- and the few strangers who came over to me actually did so to thank me for my actions and did things like ask me if I needed any water or food while I was there!

After some 15 minutes or so had passed by, a few other people came over and also sat down to "occupy" that section of road.  Like me, they looked like regular folks, as did those who had come over to thank me for my actions and offer me water and food (and, for that matter, the vast majority of people I'd see at the "Occupy" sites over the next few days and weeks).  And there and then, the conviction took hold in me that there were -- and continue to be, two years on -- lots and lots and lots of Hong Kong people who truly love Hong Kong, want genuine universal suffrage for its denizens and support the Umbrella Movement!
Posted by YTSL at 11:59 PM

We don't have much social or political movement around here. There was once one for to keep the Syrian refugees out.
I was so imbarress about how my community behave toward some.

Are there (m)any Syrian refugees where you live? Actually, I'm quite surprised to hear that there were protests about them but not about anything else -- e.g., gun control or other more "traditional" red button topics in the US.