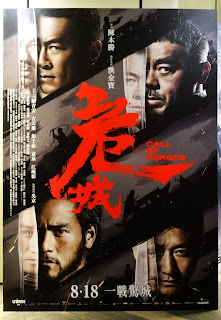 
During the last golden era of Hong Kong cinema that I consider the 1980s and 1990s to have been, many movies directed by and starring Hong Kongers (along with Hong Kong-based Taiwanese actresses like the great Brigitte Lin Ching Hsia) were shot on Mainland China.  Unlike the vast majority of recent Mainland China-Hong Kong co-productions, there was a distinct "Hong Kong-ness" to them that set them apart from the works helmed by art house and commercial Mainland Chinese filmmakers alike.


Among what I consider to be distinctively Hong Kong movie elements from that era are a certain kinetic, energetic style, the sense that no one (heroes, heroines, sympathetic female as well as male characters of all ages, etc.) was guaranteed to be able to survive to the end of the movie, and tendency to weave political messages into entertaining commercial fare.  Consequently, it felt like a wonderful blast from the past to find all this -- and more -- present in Benny Chan's latest offering: a period actioner infused with martial arts and martial chivalry that seems more spiritually akin to the likes of many a late 20th century Hong Kong martial arts movie than the recent very Mainland Chinese-feeling offerings by the likes of Peter Chan Ho Sun and Sammo Hung (the latter of whom has done so much better as this film's action director).


Set in the same chaotic period of Chinese history as the likes of Peking Opera Blues, when much of the country was ruled by rival warlords, Call of Heroes is set in a remote part of China which the vicious Cao Ying is intent on taking control of.  After his forces, commanded by his sadistic -- and often downright crazy-acting -- son Cao Shaolun (Louis Koo), lays waste to Stone City, its desperate inhabitants -- including the survivors of a massacre at a school -- flee to nearby Pucheng.


With the Republican forces based in the walled village having inconveniently departed days earlier to battle the enemy elsewhere, it presently falls to the small local guard unit headed by righteous sheriff (as the English subtitles have it) Yang Kenan (Lau Ching Wan) to try to keep things calm and peaceful.  Soon after a well-dressed stranger rides into town, proceeds to sow chaos and turns out to be none other than Shaolun, the whip-wielding Yang and his handful of allies (including his unexpectedly formidable loyal wife (Yuan Quan)) find themselves having to contend with the threat posed by Shaolun's lieutanants and the armed thugs they command, along with the fear of death, or worse, that can make cowards of otherwise good people.


Adding interesting sub-plots and layers along with shades of gray to this overall tale -- which actually is surprisingly comprehensible and coherent in view of it being the product of not one or even two but five writers -- are the characters played by Taiwan's Eddie Peng and Mainland Chinese action actor Wu Jing.  Students of the same martial arts sifu, they've since followed very different paths in life, and now find themselves on opposite sides of a fight for control of a village's fate during which you just know that considerable blood will get shed.  And although Hong Kong character actors Philip Keung and Liu Kai Chi, and Mainland Chinese actress Zhang Shuying don't have that much screentime, there's no questioning their contributions in making this film leave quite the emotional impact.

Best of all to my mind is how Benny Chan has made a movie set in 1914 have the kind of defiant messages that come across as very pertinent in post-Umbrella Movement Hong Kong and, actually, on the other side of the Hong Kong-Mainland China border too.  Sure it's on the idealistic side, and there's much less guarantee in the real -- as opposed to reel -- world that the brave and good will prevail over those who think that might makes right.  But I find it entirely admirable that the makers of Call of Heroes have chosen so emphatically -- and, I believe, sincerely -- to come out against amoral individuals who abuse their powerful positions, preferring to impose control by instilling fear and terror rather than cement their authority by way of legitimate and laudable actions.

This opened in a couple of cinemas in London today - Cineworld says the film is in Cantonese; Odeon says Mandarin, but they've been wrong before. Or could there be two versions in distribution? I better check before I decide where to see it.

Hope you like the movie too when you see it!

Like in the days of old, there are indeed Mandarin and Cantonese versions of the film. I get the feeling that like with, say, "Ashes of Time", certain actors opted to speak their lines in Mandarin and others in Cantonese. So in either version, you will get the real voice of some but not all of the actors.

Went to see this last night. I chose the Cantonese version at Cineworld, of course, but slightly regretted my decision because the cinema was pretty awful even compared to the shabby Odeon Panton Street. The screen was way too big for the size of the room, and the subtitles were about one foot above floor level and thus partly blocked by the head of the woman sitting in front of me (she wasn't particularly tall) so I couldn't sit back and relax.

That said, luckily the film was good enough to distract from my discomfort. I agree about the 'Hong Kongness' of the film compared to similar films in recent years (watching the Cantonese version also helps).

You can easily forgive the odd Eddie Peng and Wu Jing (don't see enough of him) thrown in as long as there's plenty of Hong Kong talent as well. Philip Keung has been in the last three Hong Kong films I've watched, and Liu Kai Chi is always good value for money. They could maybe have made an effort to get some more women in.

And FWIW, it's one of those strange -- and unhappy -- things for me that the same cinema that produced films like "Peking Opera Blues" and "Swordsman II" (whose nominal lead Jet Li may be but features lots of cool female characters played by Rosamund Kwan, Michelle Reis and Fennie Yuen along with Brigitte Lin's Asia the Invincible) can have such a dearth of women warriors in recent years. Honestly, in the past few years, the only fighting femmes that can approach those from the 1990s or even earlier are the lead character of "The Woman Knight of Mirror Lake" (2011) and that played by Kara Hui Ying Hung in Peter Chan Ho Sun's "Wuxia" (also 2011)... :S