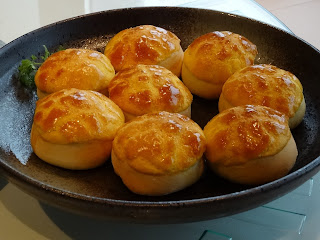 The best baked barbecued pork buns I've ever had! 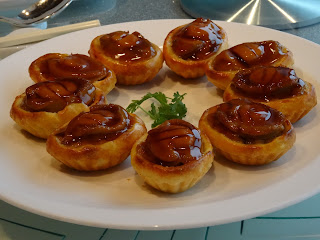 These baked whole abalone puffs with diced chicken
were super scrumptious too :) 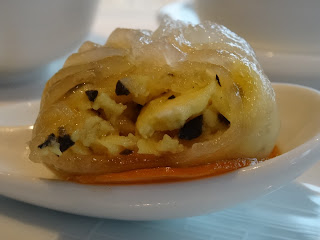 And while it doesn't look all that pretty, do trust me when I tell you
that this truffle and wild mushroom dumpling tasted heavenly ;b
Whenever I hear or read raves about Tim Ho Wan's baked barbecued pork buns, I tend to feel rather bemused.  Because, in all honesty, I think they're okay but not all that super special.  And before anyone suggests it: no, it's not a case of familiarity breeding contempt since one of this budget priced dim sum restaurant chain's Michelin starred outlets is located in my neighborhood.  (For the record: I do go there fairly regularly but my favorite items on its menu are actually the har gow (shrimp dumplings) and the pork liver cheong fan (steamed rice noodle rolls).)
Rather, I think one big reason why I don't get the Tim Ho Wan baked barbecued pork bun hype is that I had already tasted ones that were so much better at a number of other Hong Kong restaurants, notably at the Sun Hung Kai Centre branch of Victoria City Seafood Restaurant, before I ate my first baked barbecued pork bun at this dim sum chain founded by a chef who famously previously worked at Lung King Heen, the first Chinese restaurant in the world to be awarded three Michelin stars.  And Lung King Heen it was where I went for lunch one Saturday earlier this month, and had what I reckon is the best baked barbecued pork bun I've ever eaten!
Actually, I would go as far as to state that this restaurant at the Four Seasons in Hong Kong is where I had the best dim sum meal of my life thus far.  Having gone with eight other people (all of whom most definitely are foodies), our table was able to order and sample a wider variety of dishes than would be the case if our party was smaller in size.  And amazingly, nothing we ate (be it steamed rice rolls with tofu sheets, steamed lobster and scallop dumplings, pan fried turnip cake, Chiu Chow dumplings, etc.) disappointed, bar for -- if I were to be ultra critical -- the serviceable but, well, hardly exciting crispy spring rolls which I get the feeling wouldn't have been ordered if our party had not included Westerners.
At the same time, three dishes absolutely stood out for me.  One was the truffle and wild mushroom dumpling, whose truffle component I could smell through the delicate dumpling skin and was wonderfully meaty and rich tasting, yet never overwhelming.  The second was the baked whole abalone puffs with diced chicken, whose pastry was surprisingly as well as incredibly buttery -- like something you'd get at a top class Western bakery rather than what one would expect to come across at a dim sum lunch.
As for the third: you guessed it -- it was the baked barbecued pork buns!  Sweet, yet savory, with wonderful textures, perhaps the secret lies in their actually also having pine nuts along with the usual ingredients found in this item!  It is absolutely at the top of my list of dishes to order when I next go to Lung King Heen for dim sum: which, sadly, isn't all that soon since its weekend lunch reservations have to be made months in advance!

On a Michelin star note: I've also had dim sum at two Michelin starred Tin Lung Heen over on Kowloonside at the Ritz Carlton Hotel.  And while some of Ting Lung Heen's dishes may win in terms of looks, there really is no contest when it comes to taste.  Put another way: the judgements of the Hong Kong Michelin Guide inspectors has sometimes been called into question (including by myself with regards to its apparent low estimation of many of my favorite restaurants).  But I totally agree that Lung King Heen is at a level -- sometimes, even more than one level -- above every other place that I've had dim sum at; and this coming from someone who has had dim sum at scores, if not hundreds, of places over the course of her life!
Posted by YTSL at 9:42 PM